i have this little issue with the Instruo Harmonaig. I would like to control externally the chord quality knob of the Instruo Harmonaig in vcv, but it just not works, except i do it manually. I have two pics as exaples, first an external cv, second as i turn the knob myself. Do i miss something, or do i something wrong? For your answers thanks ind advance! 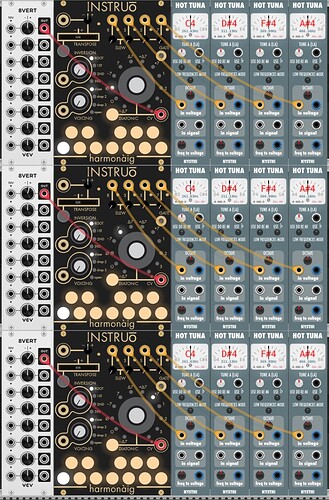 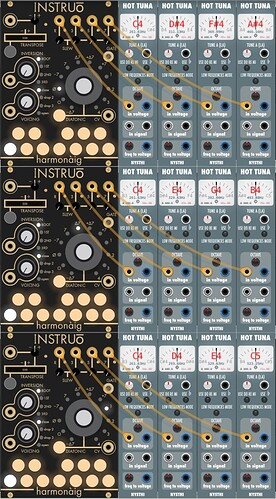 you have no input on CV input ( above the “transpose”), that should make it working.

Hey Stephan, thanks for your reply! I`ve tried it already with a sequencer in the cv input, but unfortunately the result was the same. The problem is, that if i turn the chord quality knob manually, the notes are changing, even if the main cv input is empty. But if i do the same through a simple 8vert or a sequencer, the notes are not changing. I just dont know why.

I had a bug in one of my modules at one point. Does the symptom of “unknown reason (sometimes intermittent on restarts) output not working as expected” which can be an “array bounds or bad pointer target” coding error. It doesn’t even have to be one of the modules apparently experiencing the problem it just has to be loaded in the patch.

so if the knob is maxed and you supply only +ve cv it will stay maxed. Have you tried lowering knob to min or supplying bipolar or negative cv?

Hi main.tenant, thanks for your answer! Yes, i turned the knob all the way to the left, and tried to adjust it with + voltages. Then in the middle, and turn the 8vert left/right. Still the same. As the manual says, the Voicing and the Inversion cv input have the same specs ( Control voltage is summed with the knob position / Input range: 0V - 5V ) and there everything works properly. Only the chord quality does this. One can see, that this little LED light jumps, if i adjust the 8vert, but the output does not changes. But it does if i do the same manually.

Hi jackokring, thanks for your reply! If i understand you correctly, could it be a coding issue?

It might be a coding issue with any module in the patch. It might not be. I since fixed the issue I had with my own modules. But listing the used modules in the whole patch might be useful if it is the issue. But as man.tenant suggests, eliminating the possibility that it is not just CV clipping to some hard limit should also be checked.

One can see, that this little LED light jumps, if i adjust the 8vert, but the output does not changes. But it does if i do the same manually.

@Omri_Cohen is this a bug ?

Does sound like a bug, will try it out later when I’ve some time to do VCV.

I had a similar problem with Saich, where I would sometimes lose CV control, and a slider would give inconsistent results.

I’m experimenting with the Instruo Saich module in V2 (Windows), and I’m getting some odd behavior that makes no sense to me. I’m mostly using VCV Pro 2.06 on Windows, but briefly tried V1 and got similar behavior. With a freshly initialized Saich module, all the controls work fine for me, as do all the CV inputs. But as I continue to press the Ctrl and Mix Profile buttons, I eventually get to a state where the effect of the slider control no longer matches the color coding of the buttons. Also…

Could be totally unrelated, but it seems suspicious that two modules from the same plugin have intermittent problems.

to me it looks like a bug, I reported it to Instruo

Not to hijack another thread, but has anyone tried my Harmony module who knows this module? I think they are quite different, but I don’t fully understand what this one does. Anyone know both?

Finally had a chance to test this out and can confirm I see the same issue.

I used an LFO and the lights around the knob moved as if they were selecting chord types, but the sound was unaffected and it was only by manually twisting the knob that the chord type changed.

Yes, I know both. Harmonaig does add a 7th, has more modes (14) and harmonizes non-scale-notes in the context of the scale, which can give really nice passing chords. But Inversion and Voicing are fixed (well, you can modulate it) and it is buggy since day one of the initial release in late 2020 (selected mode is not saved with preset or patch, chord quality modulation is not working, the manual refers to the hardware module and a few things are not implemented and the manual had wrong scales). But it’s one of the Instruo-Modules which does not alias

- Oh, and they are not active on this forum and don’t reply to bug reports via E-Mail - so another two points for your module.

Edit: I forgot, if you set the input CV to 1.0 and expect it to follow VCV 1V/Oct-Standards - well, you will be disappointed. And if you set the transposition before you activate it, nothing happens. So, yeah… Instruo

Ok, more or less what I thought. What does “harmonizes non-scale notes in the context of the scale mean”? I think I know…

In any case, it sounds like these are pretty different beasts. At least to me

I got an answer from Instruo, they forwarded my bug report to the programmer of the modules,
so now let’s wait …