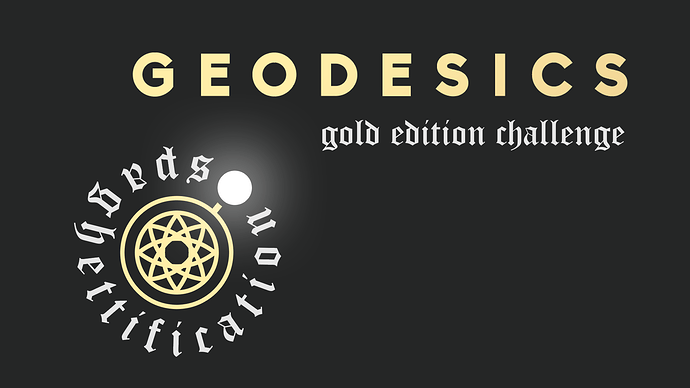 Aka an entropic challenge

Aka a challenge where Ben DeGroot can participate!

Aka a challenge where you can cheat!

Dear rackers, we have been really pleased by the warm welcome you offered to our last module Entropia. Here is an opportunity to dig deeper the entropic system…

Use the demo patch of Entropia, and turn it into something of your own, make it evolve, or destroy it as long as the DNA is kept.

A redesigned gold edition of the entire Geodesics collection (5 modules). This pack will never be public and will be enjoyed only by the winner of the challenge. In case of a tie, the design will still be different for each winner.

You can also win res long fame (eternal fame can only be provided by the VCP challenge).

A playlist will be made with all the submissions. People can vote for the best patch to their own taste.

==HOW TO CHEAT== (modular ranking)

Once the official ranking is defined, another set of rules will apply. You can take account of these rules to cheat the ranking:

Those are the rules of the challenge, good luck to you rackers. May the inspiration strikes you at the right time!

right in time for the News of the Rack!

The Forbidden module shall remain included and not be modified

Which one is forbidden?

Hey.
I just had a look at the patch and - with respect for your patching - it made my brain hurt and it was refusing to follow the signalpath.

Just to make sure, if i delete all, but the forbidden modules and build a new patch around it, it´s still considered a legal entry ?

note that the patch is mixed very hot, and there is no limiter on the output. so take caution before you start playing the patch!

for anyone wanting to start “from scratch” with just the forbidden module, here’s a cheat:
geogold minimal start.vcv (10.5 KB)

So, here is my entry for the challenge (and my largest patch so far):

I was inspired by the cheats where you have to use a bunch of geodesics modules. So I deleted everything except the “forbidden” one, and added 2 of each geodesics module and 3 entropias running at audio rates.

The result is an ambient track I played live, modulating a bunch of stuff with my midi keyboard, and playing the lead synth.

Everything was recorded live.

Hi guys, Sprry, I’ve been away for a week.

It’s called "a challenge where you can ceat, so yes
This is of course allowed to delete everything but the forbiden module

Another fun way to do that would be to take all the cables off, and start working from there

Should be indicated in the patch, it’s the Entropia module that drives the main melody 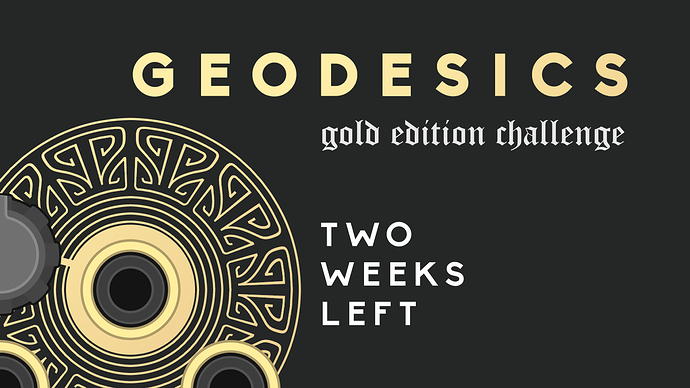 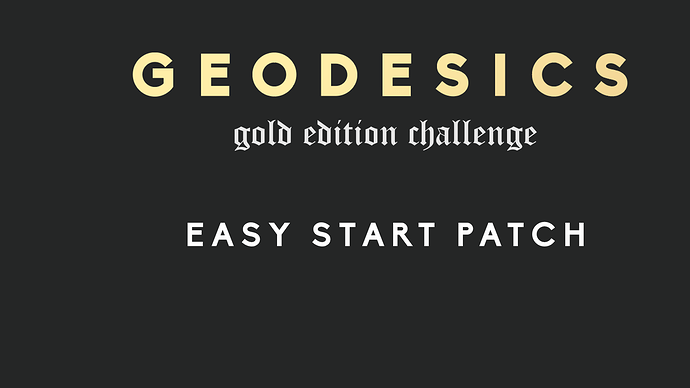 The patch was originally made for the demo video, so all the events in the patch have a precise timing, I had to make a chain of event to have all the automations happening at the right time. Thanks to your comments, I understood that it was way too complex to be modified, so you will find here a stripped down version of the patch, no automation, I just used some marcos knob that you can play with to control the structure of the song. Hopefully it will be more inspiring to mod.

May the biggest cheater win!

Explain briefly your creative process in the description

This is my contribution to the Geodesics Gold Edition Challenge.

Wherever possible, the third-party modules in the original patch should be replaced by Geodesics modules. The wiring should be kept as possible.
Each Geodesics module should be at least 2x and at least 3 Entropia modules are used as VCO to generate the two cheats.

Because the patch was again too much for my computer, I recorded the music separately. In this patch, there is no dedicated oscillator, Mr. Q generates from the input signal of the two Geodesics Blank Panel Logo modules only the high frequency signal to operate Entropia and Ions in audio mode. The sound shaping then takes place in these modules. The Entropia modules are responsible for the melody, Ions for the drums. The functions of an LFO take over the Pulsars, Blackholes and Branes modules in the middle below. The three blackholes to the right of the forbidden module are responsible for the variation of the melody. To preserve the character of the original melody, I have taken Resonator unchanged. The two Clocked modules and Foundry were only slightly modified. The sound of the melody line is generated by XFX F35 in Sallen-Key LP 12 mode and Freak in Unstabile HP mode. The bass of 2 Freak modules, once in Ferox LP mode and once in Vorg LP mode. The filigree fill ins come from Vampyr in LP-HP mode. For the drums I use both filter types from Vortex. I’ve tried to bring a logic into the signal flow and use in the Wire Manager all HTML colors for the wiring. I have always started with the darkest color and every generation has become brighter by one. For example, from the Forbidden Module, a dark green cable goes to Octave from Fundamental, the cable from Octave to 4-View is a bit brighter, from V-View a cable goes to Mr. Q and one to the resonator, both have the same color and these is two steps brighter than the original cable, etc. This system does not always work, but it helped a lot to keep track. 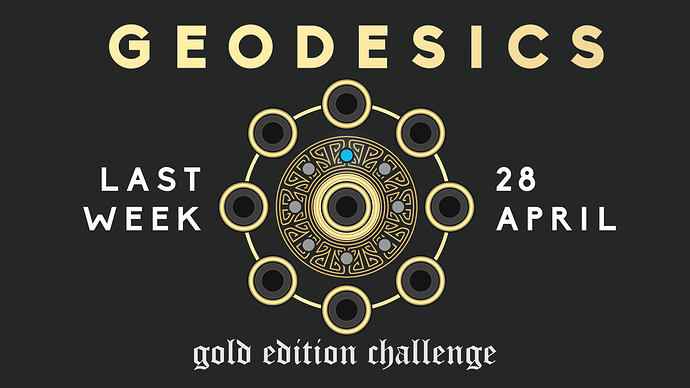 GGEch - Entropic Cave - Voyage to the Center of Earth

This is my contribution in this challenge. This one patch is completly different way to use Geodesics modules. At the beginning I did not know how to take it for it. various projects came to my mind. Finally, I decided to slow down the original base patch. I decided that the main clock would be 30 bpm. I remodeled the original patch. In fact, I tried to keep as many original modules as possible. In total, I got such a meditative piece filled with strange sounds, which mainly corresponds to my favorite Chronoblob2 module from Alright Devices. This is a large project and for some technical reasons it had to be cut slightly. I suspect that on many computers it may cause some problems. I present to you the almost final version of the patch.

This is my sumbission for the Geodesics gold challenge, it is called “Every Module Randomised”
I hop you will like it

i started from a more minimal patch, with the forbidden module of course
i used plaits (macro oscillator 2) as an oscillator, in filtered noise mode
then i added the annuli resonator for a subtle drone under that
and a second plaits in modal resonator mode to make the melody come out more
i modulated especially the filters, but also a couple of parameters in entropia,
to get more movement in the patch.

i would have liked to do more, but i’m pretty sick atm, so this will have to do

Hey.
I know, i´m disqualifying myself right now, but i only managed to record the patch, which i built 2 weeks ago and forgot, just today. I can´t bother to deal with OBS today and my entry wouldn´t be a winner anyway.

I had a few more ideas for voices, but my computer couldn´t handle more modules. After deleting all, but the one module, the patch started with Interzone, only to hear what goes out of the “forbidden module”, but i liked the sound and kept it. Next came the beat, which i generated out of the same gates to get the “rhythm unisono” and last i´ve added the resonant filter bass, that plays a simple voltage inversion of the forbidden module (i was surprised about it working so groovy).

As always when i start a patch around a Geodesics module, the whole thing was done in less then 45 minutes. Ideas just manifest themself and the process becomes less patching a machine and more playing an actual instrument. Very good programming and GUI design. 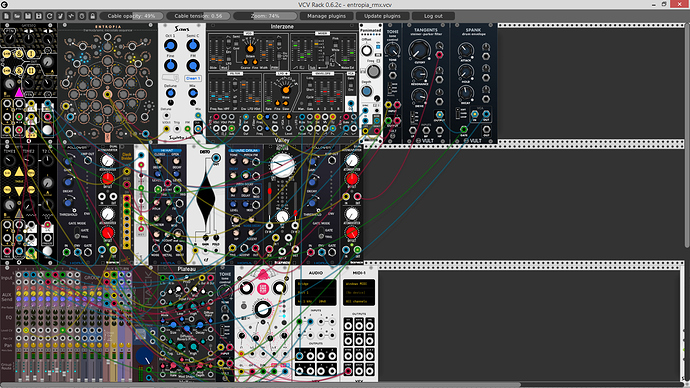 Hey that’s awesome! Any chance to have it uploaded on Youtube for the voters to acces a youtube playlist? a snapshot of the patch as video will do, but it would be much more convenient for the voters, and your submission will have all the chances it deserves! (plus if it’s your first youtube vcv video, you get one raw up on the final ranking

Well that was interesting trying to put something together for this, ditched my first patch, ended up with this, only kept the forbidden module, performance is not my greatest, sounds came out decent I thought. Fun stuff, thanks Pyer & Marc for these beautiful modules!

Thanks for the feedback and the hint. I just saw it, but i have to go to work in a few minutes and will come back too late to enter it in time. It´s allright, if you don´t accept it as entry, that you like it, is also a win for me.

don’t worry, if it’s late on youtube, it’s ontime here, we’ll wait for you to joint us on the youtube playlist. If you can make it for tomorrow it would be great