I’m having trouble finding a module that I’ve played with before on VCV. It was a Euclidian generator where it had a little “screen” at the top where you could see the geometry of the pulses, as well as the stepping. I think the module was dark/black, with red/orange visuals. Anybody know what this is? Unfortunately, searching the plugins library for “euclidian” is turning up 629 results…

This one? It’s not available in the VCV Library… 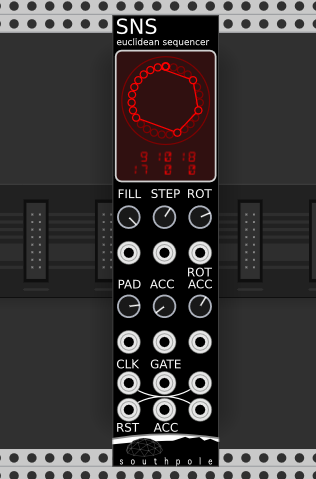 Hey @gbrandt1, are you at all in the process of updating this plugin to to the v1 api? I've started doing...

That’s the one, thanks!

There is a new Euclidean sequencer that is somewhat similar:

That is interesting, looks like they had the same ideas as I had.

Main differences are that this one has an accent feature, Eugene does not, and Eugene has switches for inverting / reversing the rhythm.

EDIT: From looking at the source the southpole sns also has some nice things like a turing mode and the ability to select different patterns (linear, random, fibonacci).

I’m fairly sure at least some of the Southpole stuff was meant to be a Clouds alternate firmware module.

Incidentaly, is there any chance of Eugene being polyphonic in the future? I.e. feed it multiple clocks and get multiple rhythm patterns? That would make some interesting things possible.

Incidentaly, is there any chance of Eugene being polyphonic in the future?

Sounds interesting. I’m kinda new to both VCV Rack and modular synths so I just ignored the polyphony stuff to start with. I’ll look in to it. It might be a good way of getting many rhythms without having to have so many instances of the module.