Unless I’m being a dummy, which is entirely possible, I can’t see any facility to add swing or humanisation on the Entrian Drummer within the module itself, only from the clock feeding it e.g. via swing on the excellent CLOCKED module from Impromptu or via some kind of lag mechanism you add yourself between the sequencer channel out trigger and the drum source.

In many commercial drum machine plugins these days you can add global swing or even utilise different levels of swing on a per-drum-channel basis and I find it really helps to keep things interesting. Is this something the developer would consider adding for a future release?

Seeing how many people now implement extra functionality and to prevent the interface of the sequencers getting too cluttered perhaps there could be a swing expander module that allows you to save the set swing states for all the channels as a preset.

I’d be very interested to hear what you and others mean by those phrases - I have my idea of what they mean, but often different people have different interpretations, and different priorities.

If I announced tomorrow that I’d added swing and humanisation, what would you expect to see?

Typical scenario, you have a pattern of 4, aka 16th notes. 1 and 3 are on the “grid”, but 2 and 4 are a little bit late. Either subtle or dramatic, it’s definitely useful. Humanisation, probably just being a little bit off, slight variations in timing or velocity, or both.

Well humanisation is a very open ended phrase, but if we first stick to swing or what is sometimes called groove quantisation then I guess we need to look at how it’s represented in existing software and what we think it means.

Firstly how it’s implemented - sometimes this is represented either solely at the global level e.g. the Swing Knob on this Drum Trigger Sequencer module in Voltage Modular that goes between 50% and 80% 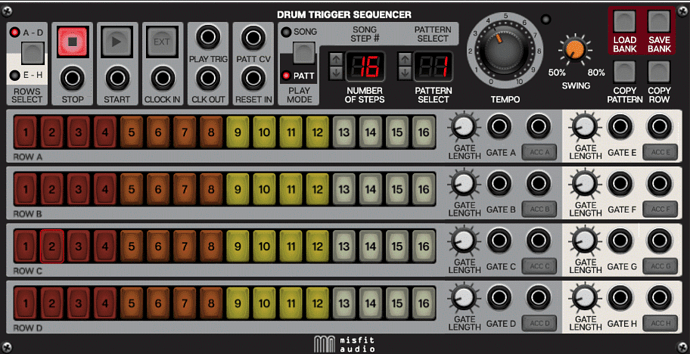 seq - global swing912×468 147 KB
sometimes you can set a global swing or have more granular control over individual drum channel swing e.g. in the XLN Audio XO plugin below you can see on the right there are named swing settings (named ‘Groove’) applied to the FLEX 2 and CLAP drum channels. 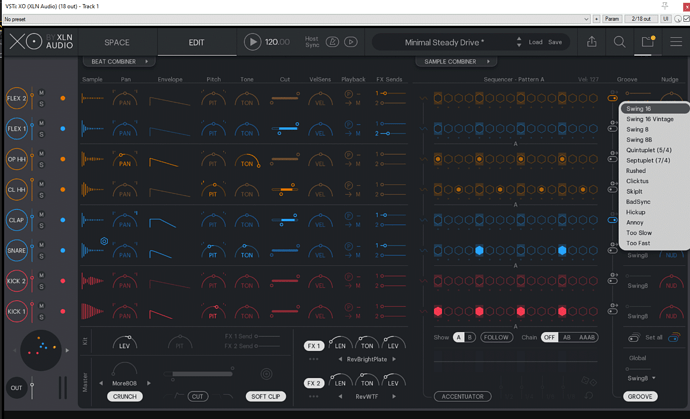 I agree what exactly ‘swing’ is may be open to debate, but most sequencers and drum machines seem to reference some values between <50% and >50%, defaulting to 50%, that applies to note timings - move a swing knob to the left, the value goes lower than 50% so note timings tend to slide earlier (I don’t know how the exact voodoo works, but it seems to be somewhat probablistic) and higher than 50% the timings tend to slide later - so it’s a way of getting a track to sound a little like a drummer that’s either pushing or dragging with respect to a metronomic beat.

Humanisation is hard to pin down, but tends to be implemented as a way to define the range by which a sequencer’s triggered note duration and/or velocity can vary from the note event as defined in the sequencer e.g. if we think in terms of a note with a velocity 100 and duration 1.0 s and the humanisation range setting for both duration and velocity is set at plus-or-minus-10% then velocity would randomly vary between 90 and 110 and duration between 0.9s and 1.1s.

I may have done a bad job of explaining myself, but I thought I’d at least try to rather than just dropping a link to some YouTube video that purports to explain what swing is, like this video about how to apply it in Ableton Live 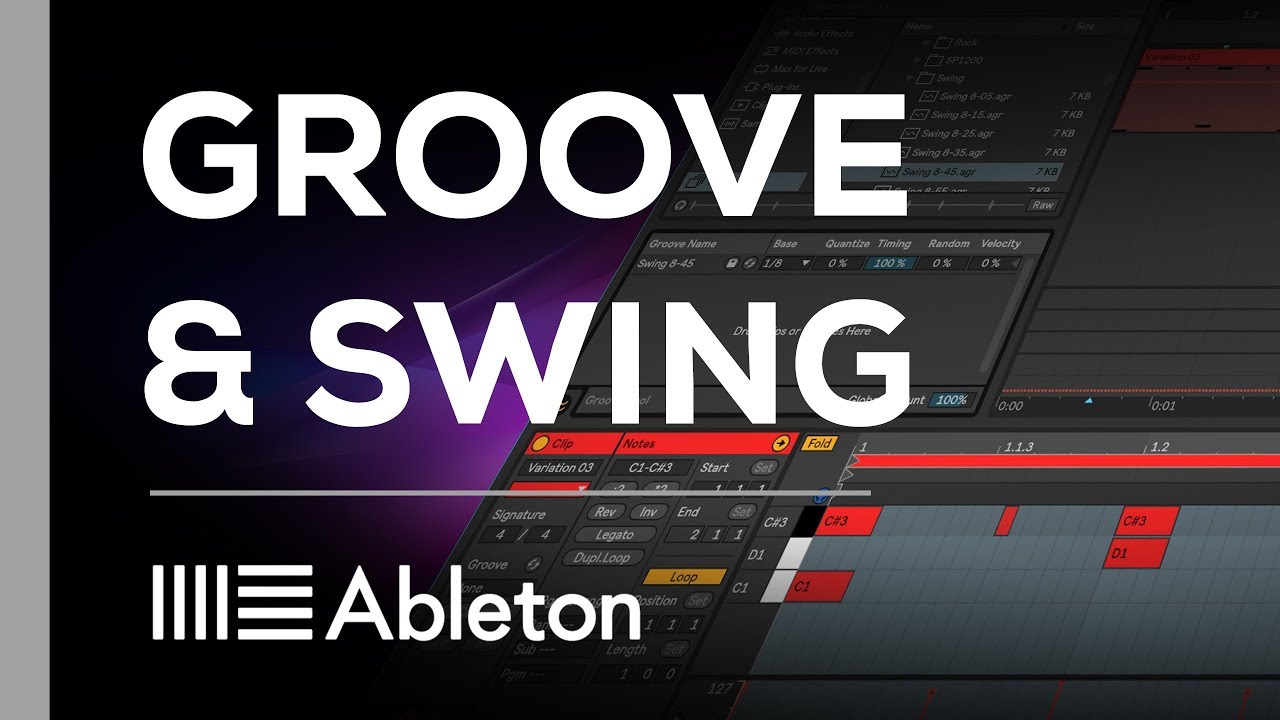 Oh and after all that I forgot to add the great work you have done on the sequencers, it’s nice to have a familiar place to arrange in amongst the (fun) sea of modular madness.

Not necessarily I’d say because you probably want some tracks to be swung and some not. So you take the regular clock and apply swing to it on some tracks (as you described in your post above)

There’s definitely some ‘secret sauce’ applied on some hardware sequencers, people go misty-eyed talking about the groove and swing they can get from am MPC, for instance.

If you are thinking modular where one clock pulse often = one note, sure. If you think like conventional DAW/Sequencer (like my Seq++

then the clock is usually much faster than a beat, and you can lay your notes wherever you want them.

If I announced tomorrow that I’d added swing and humanisation, what would you expect to see?

swing means more or less the same thing to everyone. delay the “even” eighths or sixteenths. delay from zero up to making them like two beats out of a triplete. There you go.

Humanization is easy, too. Just add some random timing slop in some way that probably doesn’t make anyone happy and ship it

Humanization is easy, too. Just add some random timing slop in some way that probably doesn’t make anyone happy and ship it

Thanks everyone, especially @markrowe1967 - plenty to think about there!

The ability to apply swing independently to separate drum channels seems surprising to me, but that’s why I’m not a drummer. 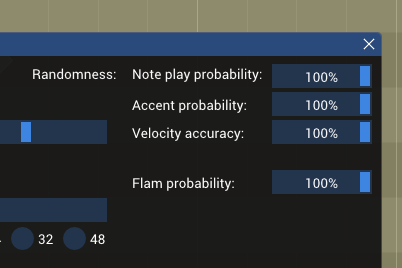 The ability to apply swing independently to separate drum channels seems surprising to me, but that’s why I’m not a drummer

It’s used a lot on hats in EDM. The kick stays relatively on the floor while the hats wander.

The ability to apply swing independently to separate drum channels seems surprising to me, but that’s why I’m not a drummer.

Yep - I’ll often apply swing to my closed hats and shakers for example to add some groove, while keeping Kick, snare and off-beat hats with no swing. While those elements often sit on 1 and 3 and don’t get swing applied anyway, that’s not always the case, particularly when doing fills and ghost hits etc.

If anyone wants to learn more about this, the Rhythm and Groove course from Production Music Live is excellent - costs £19 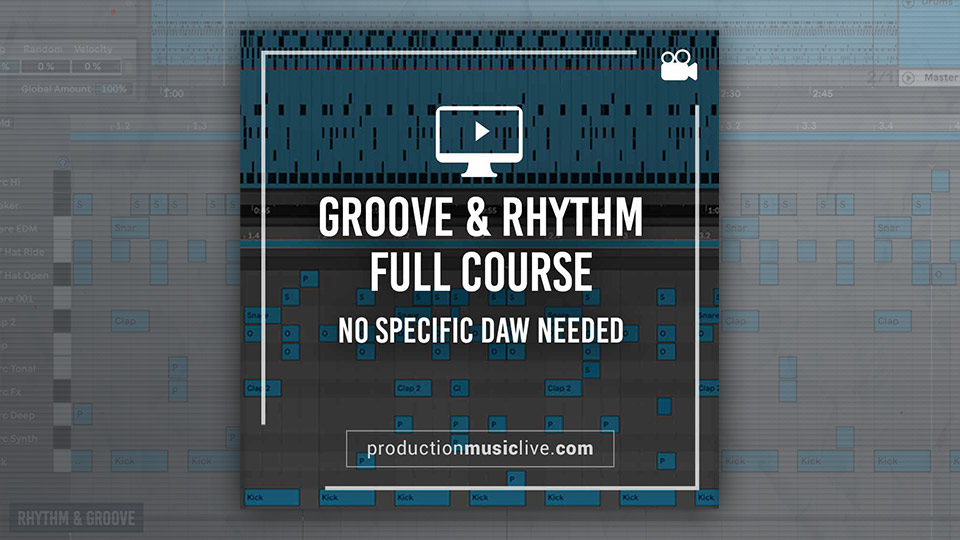 check out Gnome from drumkit for a clock that supports multiple swing outputs, and has the ability to adjust.

drumkit’s sequencer uses a clock input but supports much of the same things as a drum trigger sequencer.

That’s really interesting. I would ask the developer to fix their user manual link in the Library because the page it takes you to only shows images, you need to go to This Github Link to get to the manual itself which explains the different swing outputs.

Thanks for the heads up. Having 2000+ modules to choose from is a blessing and a curse.

My preference for a sequencer would be to apply swing on a per channel basis rather than run separate sequencers for the drums with different levels of swing, but I’m happy there are options to get to the same place musically.

I think this is why I use a super fast clock. One of these days I’ll grow up and learn how to swing, erm, you know what i mean…

That’s really interesting. I would ask the developer to fix their user manual link in the Library because the page it takes you to only shows images

images and a link to the manual, which if you missed is here - it was right next to the GitHub link you copied.

Actually I missed the link because on my browser the links for Manual and Source Code look like Manual Source Code and as there’s no separate underlines in the style it all looks like one link although obviously kind of meaningless.

However, maybe just me, but anyway I kind of expect to get straight to the manual when I click a link that says Manual.

Here’s what I’m thinking for swing support in Entrian Sequencers. Please tell me what I’m getting wrong!

You control the swing using this dialog:

While I asked the question and the answer looks good to me (and thanks btw) I’ll leave it to others with more knowledge of how swing should work with sequencers to give you constructive feedback.

mightn’t you want your whole piece, drums and melody, to have swing?

Jazz is usually played with a swing rhythm (swung rhythm?). We can visualise swing with graphs, but the best way to internalise it is to listen to it.