“Things are not in the time but the time is in the things”.

Well, tomorrow Stockhausen would have turned 91.
I thought that this occasion could lend itself to open here a more general discussion, or rather a meeting place, about the influence of “classical contemporary” avantgarde on compositional behaviors in modular electronic music.

To start with, I propose here this series of Stockhausen’ British lectures, which I find to be a true source of inspiration, as well as revealing a beautiful historical snapshot of the culture of “contemporary academic” music education in the early 1970s.

someone linked lecture 4 (i think) to me on here a while ago and i’ve been trying to make my way through it. I keep getting distracted and having to start again from the beginning. Interesting stuff though.

Yes, lecture 4 is the last in a series describing the Moment-form, a central concept and a landfall in Stockhausen compositions.

Those particular cycle of lectures really have to be listened to in sequence, from the first lecture to the fourth one, to be fully understood. But doing so, the 3x3 terms grid that Stockhausen draws in the end becomes really clear, and one realizes that the Moment-form is a polished, so much logical and simple, organizational framework for a different composing practice. Even if sure, while exploring this form, Stockhausen articulated his scores with really complex and detailed rules.

Incidentally, for all “pure-sound” oriented type of persons, I find that some passages of Carré (featured in Lecture 4) give you the chills.
I’m attaching an image of the “Form structure” for Carré, taken from the Stockhausen: Sounds in Space blog, where the principle of variable distributions of events, for each subgroup of performance parameters and actors, results in a very familiar graphic output to us, so accustomed to modern sequencing tools. 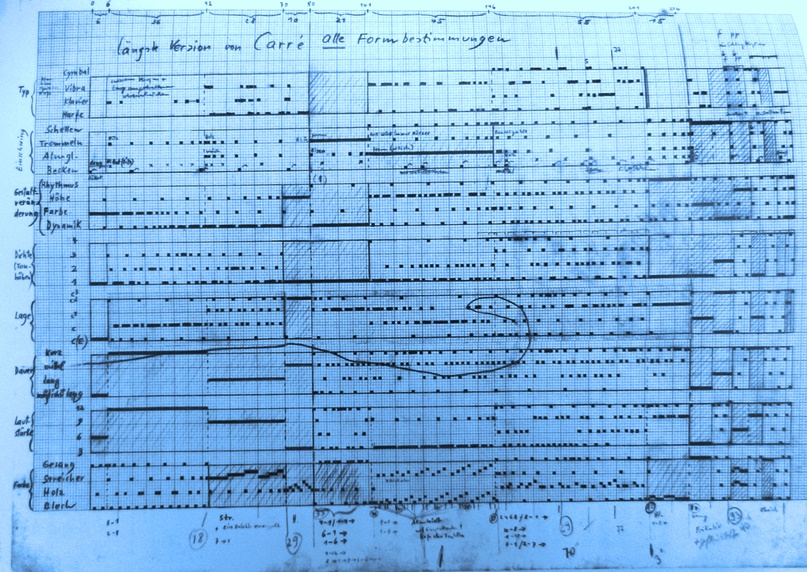 Yes, lecture 4 is the last in a series describing the Moment-form , a central concept and a landfall in Stockhausen compositions.

So what are the other three lectures about? Are they unrelated?

Ah no, no, the opposite! The first 4 videos in the playlist are simply split parts of a single, more than 2-hours long, lecture. For this reason one needs watching the 4-parts lecture in its entirety, from lecture part 1 to lecture part 4.

In that big picture, Stockhausen moves from the musical heritage of Olivier Messiaen’ punkte-music and Anton Webern’ serialism, and elaborates on the re-conceptualization of the primary elements of the musical material, using his own works as examples, in an attempt to theorize the so-called Moment-form as his peculiar, elective approach to the form of a composition.

EDIT: @dag2099 Sorry, I realize now that I misunderstood your first reply, when you quoted “Lecture 4”. I intended “Part 4 of Lecture 1”, so now you can understand the sense of my second reply.
For what concerns “Lecture 4” (that is split in 2 parts), yes, it’s a reasoning on a different topic, though it was given in the same days.

Can anyone recommend a Stockhausen docu or book if such a thing exists?

Hi @fstop, I try to note down some starting points here, from where one can go his own way following personal needs and interest.

I would not say that we have a classic “treatise” in the traditional sense, nor academic or theoretic books, from Stockhausen hand, but the vaste amount of his works, programme texts, and personal notes and analyses, collected in a monumental series of 17 volumes (Texte zur musik, published by Stockhausen-Verlag).

We do also have various biographies, collections of lectures and interviews, different studies on his
works and his figure.
Here you find a complete list of works (comprising the literature).
Here, an extract of the literature only, from the previous source, in PDF format.

Following, only a brief, compilative summary.

Obviously, on the Web one can find more episodic but interesting essays, analyses or interviews, here a couple more:

Wow, @dizzy, thanks so much, it’s really appreciated.