Hi ! About effect patches, I was looking for an audio pitch shifter to put in a delay loop, or in a reverb for some sort of shimmer effect, what module could do that ? I was thinking maybe using a clock multiplier / divider, but it does not work with high notes (length of the gate being a problem) and also you loose any timbre, you get a pulse wave so…

My frequency shifter might work. Being a freq shifter and not a pitch shifter it will be very out of tune for large shifts, but for small ones it might work fine. It does not mute the sound or have any latency.

He posted a link to the most recent version

Thanks, I had not figured out how the shift value works in the Nysthi one, it can indeed give me an octave or two up, or one down. Perfect ! The Booty Shifter is the one I use for more crazy style freq shifting, indeed.

But it will do very small shifts. Just sayin……

hi here is my current version of a shimmer reverb (bottom line in the patch) i made with the RSC reverb and PS (pitch shifter) form dbRackModules (indeed originally i built these modules also for this purpose).

The feedback loop is made with Fundamental modules and the Plateau Reverb is behind (for diffusion).

It shows also the SuperLFO used as normal oscillator. The chords are randomly “played” with RndC by attenuating voices in the VCA. 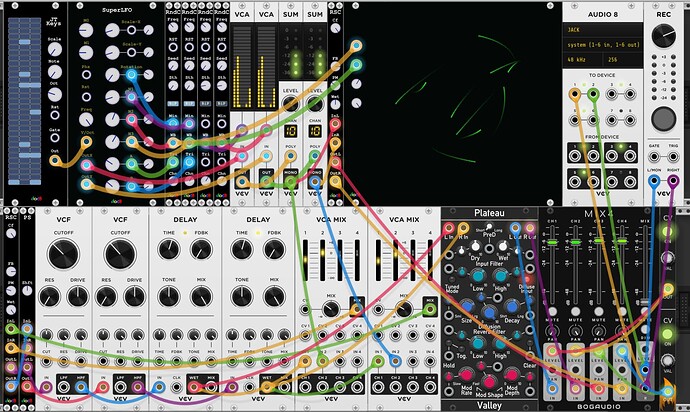 Well a fine collection of modules you have created for us all. Well done, the Genetic Super Terrain looks super interesting. Gonna go explore that now.

Hmm, the Genetic Super Terrain only seems to work for a 2mins then cuts out, also the Out R does not seem to be working, I am on Windows using Version 2.014 of Rack. Oh dear!

Out R does not seem to be working

It seems to be sending a stereo signal to the left channel from the Left Out and from the Right Out; 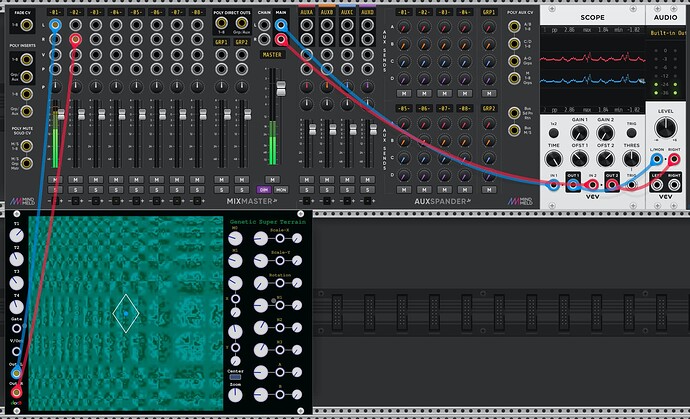 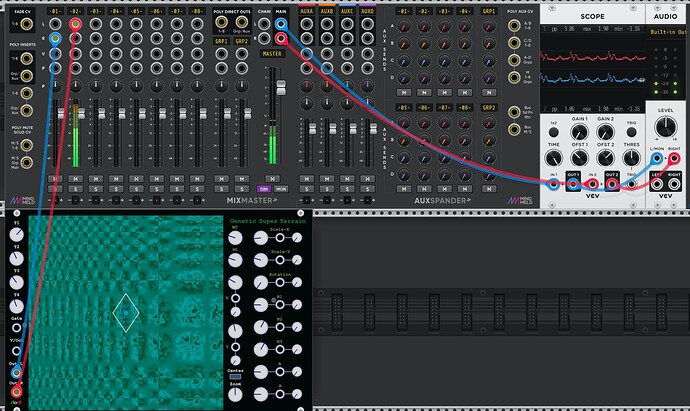 If you want a mono signal to be only in the right channel, plug it into the L input and pan it fully right.

if you want to compare the left and right outputs of this GST modules, plug the L & R outputs into the L inputs of two different channels on MM and pan one hard left and the other hard right.

the L input is for mono signals

Sure, that’s how almost all audio devices work. But I wonder if there is a cool way to use the new port tooltips to message this back to the user?

Or have an input port light up red if only R is patched?

Btw. i did not mention it in the manual yet: The difference between left and right is, that the curve is traversed backwards for the right channel, this makes the more or less stereo sound depending on the terrain under the curve.

That true for almost all decent mixers, right? I guess for the nerds you can document if it’s -3 or -6 in the middle.

Yeah left is usually mono isn’t it? I thought that’s some kind of convention.

Anyway, here’s one of the versions of my effects ‘morphing’ idea. It’s work in progress really, this one is patched with a Sussudio for trying out different sounds but I’ll probably use it for live input when it’s finished. The idea is there’s a few different effects (resonators, delay/flanger, phasers, ring modulation and comb filters). The Transit module slowly changes a few parameters simultaneously and also cross fades between different effects using the Submarine cross fader. Another version cross-fades mod sources in as well, for example between LFOs/S&H.

PS. This was in v1.6 because Masarti doesn’t seem to be in v2 yet and I couldn’t find another comb filter that was exactly the same.

I’ll do an audio example when I get a chance, the question is what else could I add? Some different filters maybe, granular stuff, frequency shifters? A looping section to capture interesting transitions? I’m trying to think of some effects I haven’t done before!

Wahey here we go Vortexing again like some did in 1980-90s{?} Hope this works without a real guitar? Usual swap of VCV Sound sources-Resonator or any VCO? Give it a good workout!

A load of piano samples were bounced in Nysthi’s Sussudio module and then mutilated using Multi fx section. Enjoy my lovelies!

Nicely done, the resonators are processing audio not generating any. I might take them out in the finished version, or at least use different modulation and tune it to the key I’m using (sounds better with V/Oct input, although the ringing atonal thing is good on some source material).

I’m racking my brain to think of any effects I haven’t used before in a patch. There are a few modules I haven’t looked at yet, for example Tonecarver Blur, and also Nysthi’s WORMHOLIZER deserves to be used more. Maybe a new micro-looper plus some filters I haven’t played with yet, I don’t know. Suggestions welcome!

Nice! Never played a real LP but my first electric was a copy made by a company called Hondo. We did a Jimi Hendrix on it after a few beers and partially destroyed it with fire and power tools. The idea was to make it into a more interesting shape and re-paint it later on, but my mate’s dad decided it was junk and threw it in a skip!

The Vortex is in slightly better condition but I have no idea if it still works. The power amp in the same rack case died with a puff of smoke last time I switched it on, so I suspect it got damp at some point during one of many house moves. It was my old guitar rig from the mid 90s and contains an ART Multiverb which is also defunct, and a Marshall pre-amp with MIDI. Quite advanced for the time, but sadly probably also F’ed!