OK so this is like a stupid pet trick, only it’s a HET-trick. Get it? It’s a joke, son.

But dust outputs randomly distributed crackles, which you can use as a trigger source.

So the gridseq X and Y clocks are randomly spaced triggers from instances of @trickyflemming Hetrick Dust. Oh, and the gate out on Gridseq drives 2 S&H random value modes using the Coirt Sample & Hold, and the random values are fed into the CV control for the Hetrick dust units.

So the rate of the random triggers generated is also randomly modulated.

That’s a Blackadder level of a Fiendish plan!

Any audio of this totally crazy Baldrick style conundrum! What mayhem does this cause! Is it on the scale of the Old wise women who is: 1 Old 2 Wise 3 a woman ? Stay insane and experimental my friend.

I think this one only has free modules. It’s sort of randomly clocked FM-Op Steel drum music. For bonus points the rate of random triggers from the Dust module is modulated randomly by a S&H driven by another Dust module.

So I’m like XZBit - I put some random on your random, dog. 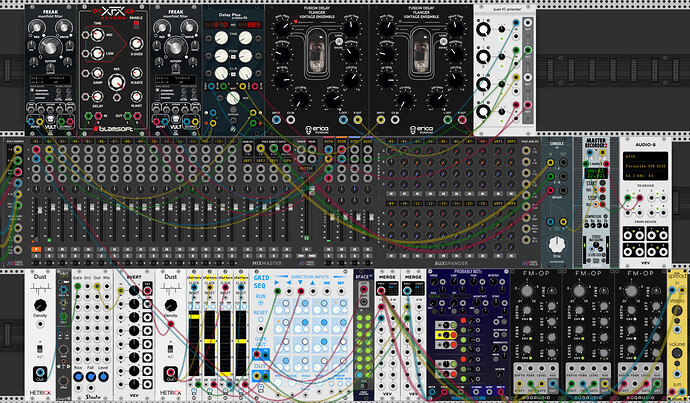 Oh to be a teenager and talk random crap! My dog is no longer with us, it is in doggie heaven! It sounds great and thanks for the patch, I had not expected that. So the fiendish Blackadderness is all workable! The plot against the Queen is alleviated! Long may she reign! Huzzah. Oh no Queenie liked him after all.