However, I don’t think I have tried RSC.

I am not even confident that the common factor has been dbRackModules.

It has happened often enough under some condition(s) (that I can’t put my finger on) to be more than a fluke, but not enough to detect the pattern. And I don’t trust my memory enough to know what minimal set of plugins were in use. I have been using two pre-release plugins - dbRackModules and Stoermelder PackOne. I remember I was trying some modules that were new to the plugin pre-release version when the crashes occurred, but I can’t remember which one(s)

And of course they were not the only modules in the (small) patch.

Not much help, I know. I will try to be more diligent if/when a crash happens again.

Actually I am still using Rack 2.0.6 because it appears to be more stable, based on all the reports of instability with the unreleased newer version(s). I haven’t been following the Rack pre-release too closely since I made the decision to wait for the official release. But I was tempted to jump on board until I saw the flurry of problem reports.

I’ve had crashes like this lately too where Rack just suddenly stops responding (but keeps playing audio) and I have to kill the process, and I’ve definitely had it happen without dbRackModules in the patch.

the only change in RSC in 2.1.0 was that on startup it is ensured that the pitch modulation parameter is evaluated and the reverb is initialized correctly. in the previous version RSC made occasionally some noise after startup which disappeared when adjusting the PM parameter. therefore it seems unlikely that the new version is causing crashes - but if you can say for sure that the 2.0.5 version does not reproduce this behavior, i could have a deeper look at it.

Reading @DaveVenom 's and @TroubledMind 's responses I think it should be a general issue and not related to your modules.

Just some coincidence. I admit I happen to use RSC too often in my newer patches.

This sure sounds like the issues that lead to me creating this thread:

Which plugin (if any) is crashing Rack 2.1.0 standalone patch? Development

@baconpaul Does anyone know if Surge does crash Rack these days? I have been working on trying to track down what is crashing Rack 2.1.0 Standalone in several of my patches. This morning I removed the Surge Rotary module that I had added when I created this patch series a few weeks ago. So far I cannot induce a crash with this patch now. It is still too early to tell but, after I found this GitHub issue from January that is still open and no apparent plugin updates since then, I thought I…

And to the one pointed out by @marc_boule here:

UPDATE: thanks to @Jens.Peter.Nielsen for the confirmation. Hi devs, I’ve been noticing a segfault in Rack (2.0.6) when closing after having done some copy-pasting of modules during the session. I don’t know the exact reproducibility of this yet, so I want to try first with someone using a similar setup: using/compiling Rack sources in Windows in the MINGW64 shell. If the bug (and the fix I’m proposing) are confirmed also on someone else’s setup, then I will submit this to VCV support. Please…

Note, for me, this problem is worse in Rack 2.1.1 than in 2.1.0 , but, since I have been able to totally avoid this crash by not doing any module resets automatically with a small delay after patch load, I have quit worrying about it, even though I know there is still an apparent bug in Rack 2.1.0 and 2.1.1 .

With this bug, it seemed sensitive to connecting cables to modules when editing the patch, but was impossible for me to track down what was happening.

By the way, I did have a crash bug in an early version of Meander for V2 that was related to connecting cables to my module and how I was handling internal detection of those connections. Basically, I was accessing the CableWidget in my ModuleWidget:: step() override. I had to add the isComplete() check on the CableWidget object before doing anything with it.

Don’t know if this is relevant, but I have never discussed this here.

Rotary works peachy here in every patch I make as it is part of my default effects in my template. That is never crashing here, nor have I had any crash in 2.1.1 on MacOS 12.4. M1 Mini.

Rotary works peachy here in every patch I make as it is part of my default effects in my template.

PLEASE, Ignore any specific plugin or modules discussed in my thread. At various times several modules seemed implicated in the crash but that seemed to just be due to the crash being more likely to occur the more modules there were in the patch.

That seems similar to what is happening here in this thread, perhaps.

Note, I edited my first post in my linked thread to clarify that this bug seems to be in Rack rather than in any specific plugin or module. But, this all still unresolved, so there is no solution closing out that topic, yet.

For anyone interested - I posted the following PAD2 enhancement requests on github, in case you want to express interest (or lack thereof) in the ideas:

I am loving the sounds and design of PAD2, and it is spawning lots of ideas: …The Generate button that randomly creates partial amplitude profiles is begging for a trigger CV input to go with it. And it would be great if there was an option for slew (knob and CV input) during profile transitions, expressed as seconds to morph from one profile to the next. I think there should be 3 polyphonic CV inputs to cover the 48 partial amplitudes. There should be an option (control or context menu) to control whether the input voltages are sampled continuously, or by trigger. To keep things simple, you could ignore all partial inputs if the first input (2-17) is empty. If the first input is patched, then any missing channel(s) would default to 0. I think less important, but still potentially useful would be 3 polyphonic outputs for the instantaneous partial values (reflecting any slew or morph state) I envision the following rules for how the various inputs would interact: If 1st partial input is empty, then: - 2nd and 3rd partial inputs are ignored - generate button (and new trigger input) randomly assign partial values following current method - time to morph from old profile to new is set by slew If 1st partial input is not empty, then: - any unpatched partial channels default to 0 - method control is ignored - If input mode is sample: - generate button/trigger samples inputs to assign partial values - time to morph from old profile to new is set by slew - If input mode is continuous: - partial values continuously updated by input values - generate button/input and slew knob/input are ignored

The fundamental frequency definitely has a significant impact on the resultant s…ound. I generally find that as long as the value is <= the actual V/Oct pitch, then I perceive wavering pitch over time that is pleasing to my ears. As the V/Oct rises in pitch relative to the fundamental, I hear more and more "shimmer" If the fundamental is > then V/Oct pitch, then I typically perceive stepped pitch variation over time that is jarring to my ears. Not sure if there is anything you can do about that. I am curious - Are you using the upsampling/downsampling tip from the algorithm creator? It might be interesting to try with and without, in case you haven't already. Given that the fundamental has such a strong impact, it would be good if it had a CV input. Beyond that, I think it might be nice if you could specify the fundamental frequency as a ratio of the incoming V/Oct. You could have a mode select (control or context menu) to control which option is used. If frequency mode, then the knob would offset the incoming V/Oct. If ratio mode, then the knob would attenuate/amplify the incoming V/Oct. Now the big question - should the fundamental CV input be mono or polyphonic? If computationally feasible, then allowing poly would be good, where each each channel gets its own wave table based on its own fundamental value. If not feasible, then mono input is the obvious choice. You could forgo a separate CV input for the fundamental, and simply use the existing V/Oct input. But I think a dedicated fundamental input gives the most flexibility.

PAD2 is great for discovering interesting sounds. An expander could be used t…o store the current partial profile, as well as bandwidth, scale, etc. based on the press of a button (and maybe CV trigger input?) The expander could have N slots, each with its own button for setting/recalling a given profile. And there can be CV control to select any one of the slots on demand. And it can honor the slew that I suggested in another enhancement request. There can be a number of modes as to how the CV selects the each profile. Basically I am talking about the functionality of Stoermelder's TRANSIT module, but dedicated to PAD and PAD2. TRANSIT has a large number of interesting selection modes. The beauty of such an expander would be you could discover/dial in and store the sounds you want with PAD2, and then transfer the expander to PAD for a more compact combination that no longer needs the sound discovery UI of PAD2. One thing I have not thought through is what the behavior of the PAD2 controls should be if they are modified after the expander specifies a given profile. I see two different use cases for the expander - To create compact static "instruments" using customized PAD sounds. By static I mean that the partial profile and other parameters would likely not change once set up. - To sequence constantly evolving PAD sounds One other idea is to have a mechanism to write out a given profile to an external file that can then be shared and loaded by others. There could be some interesting preset files distributed with the module(s) 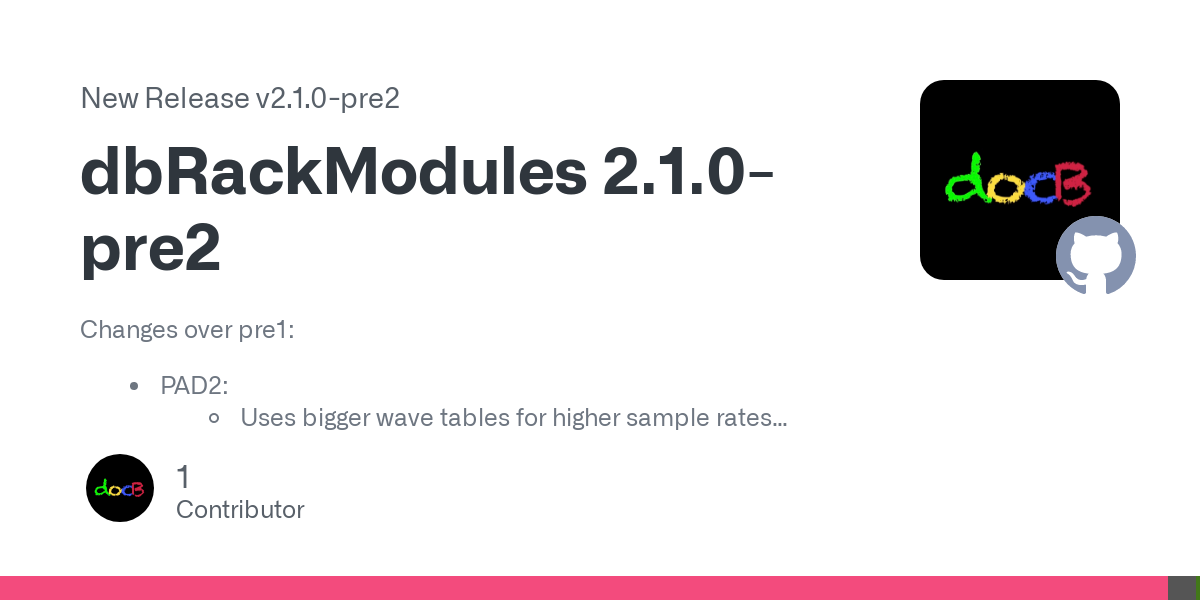 Changes over pre1: PAD2: Uses bigger wave tables for higher sample rates Has inputs for controlling the partials The partial sliders start now with one - the fundamental (breaking change) which w...

Mainly there are now some features for morphing between PAD sounds. See also:

Contribute to docb/dbRackModules development by creating an account on GitHub.

and people can grab these and make a patch still in time for the current vcp challenge!

yes, its still a pre release but i think there will no breaking changes anymore so it will stay compatible in the patches.

Those Pad2 demos sound so gorgeous…

Amazing collection of modules doc, really need to dive into these. Well done and thanks!

Thanks all for testing/commenting. dbRackModules 2.1.0 is now in the library.

It still excludes the latest ACC modification, doesn’t it?

sure, because ACC is dbRackSequencer. There i have to write manuals first, as there are some new modules.

sure, because ACC is dbRackSequencer.

I’m already dizzy because of the amount of modules you released.

Do you take ideas/suggestions for new modules?