I’m working on my second module.

Bitwise contains four sample and hold modules (basically four of my Pop modules jammed together) where the triggers can be “filtered” via selectable patterns of 4 x 16 boolean values.

If the trigger input you send a pulse to is “on” in the “row” of the filter pattern, the trigger in that sample and hold circuit will fire. If not the trigger pulse will be ignored.

You can manually select the “filter row” and also modulate it with CV.

Each sample and hold element also has a pulse trigger output as well.

The draft panel design is below but some features are missing, and the final design will be different as the colour contrast is rubbish and labels are missing, etc. 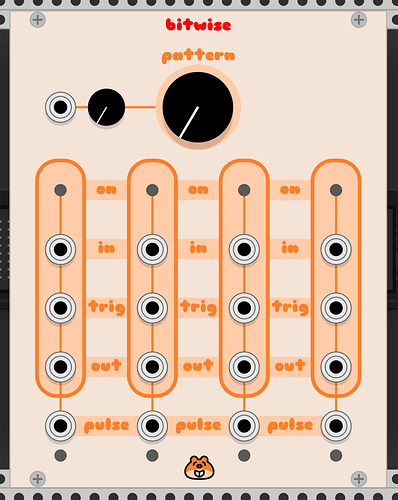 …with cables showing in a test patch… 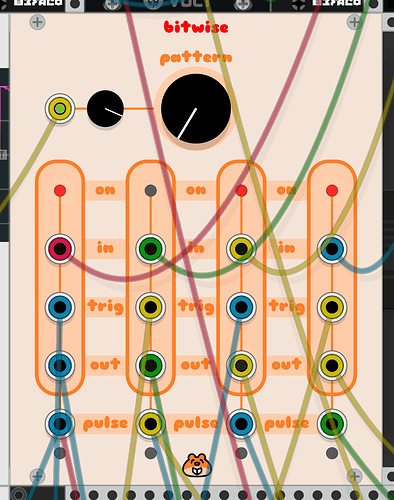 Some things not showing yet which I’m working on:

I’m making this to (i) scratch my own itch and (ii) learn more about module development.

This will take me a few weeks to get ready for any testing people might want to help with, as I’m not a super genius.

After the release I will work on an expander module for it to enable people to create, load and save their own filter patterns.

Thanks for reading. I’d appreciate any thoughts. And if someone has already done a module like this I apologise in advance. There’s so many modules now it’s hard to keep up.

I’ve worked on the panel design to try and make things a bit clearer. I’ve added a “display” (really just a big grid of lights) to visualise the trigger “filter” pattern. 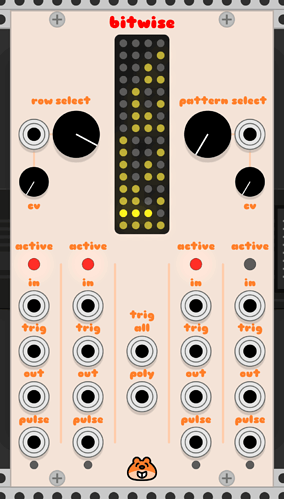 The “trig all”, polyphonic output and pattern select functions are not working yet, but I’ll be completing them over the next few days, then should have a release for testing when I’ve written some documentation.

If anyone wants to play with the incomplete version now it’s on the “bitwise” branch of my modules repo on GitHub, but be warned that it could change as I’m using that branch as a “safety” / backup for my work. Edit. The bitwise branch has been deleted as the code for Bitwise is now in the master branch.

If anyone wants to play with the incomplete version now it’s on the “bitwise” branch of my modules repo on GitHub, but be warned that it could change as I’m using that branch as a “safety” / backup for my work.

I would like to try it, but I can’t find a compiled win version on github

Apologies. I should have make it clear. I meant if you want to download the repo and build the module you can have a play. I’ll be making some binaries for testing soon. Thanks.

I’ve got the pattern select knob and CV working now. Here’s a GIF showing the CVs affecting the pattern and row selections…

Just the trig all and and poly output to do (and maybe some custom graphics now that I know how to subclass widgets!) then it will be ready for testing.

Here’s the final panel. Too much? 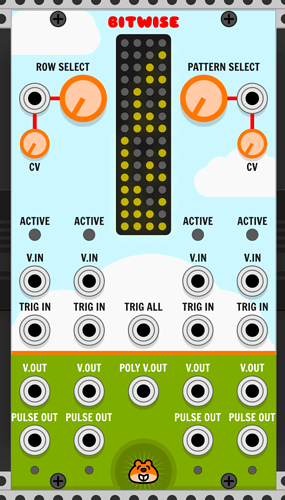 Working on the Poly Out and documentation this weekend then will have some binaries for testing.

Too much? Definitely. But that doesn’t make it bad. I dig it!

The beta version is available via the v1.1.0 beta release page on GitHub.

I’ve written some (very) draft documentation about Bitwise on a GitHub wiki page. If you want to help with testing (you don’t have to!), the details are on that wiki page.

Many thanks in advance if you do give me some feedback. I’ve tested it as much as I can on virtual machines, but that’s not the same thing as the real deal.

Depending on how the feedback goes, I aim to make this final and then submit it to the Plugin Library in two weeks or so.

Seems to work great for me on linux https://youtu.be/hZmItsdd7FM

Can I just ask what you’d want that to do? And where in the panel the knob might be best placed?

Thanks for trying it out. I really appreciate it. And the music in that clip is very nice. I really like the synth sound you’ve got in that clip. Rather beautiful!

I think that a knob to control the output range would be good. In that video I am using an attenuverter to control pitch but ultimately it is coming from bitwise, it would be cool to scale the output to more useable levels for pitch cv, like the Turing Machine does. It could be placed above or below the trig all port, would make everything symmetrical.

Thanks! I was just messing around to test the module but it took me in an interesting direction.

In my testing I was attenuating signals before they went into Bitwise.

Did a little test myself. I’m enjoying this a lot. Global attenuverter will be really helpful.

OK, gang. I hope you’re doing well on this lovely evening. It’s not raining here, which is either good or bad, depending on if you’re into the whole rain thing, I suppose.

Beta 2 is out. It now includes the global output attenuator requested by @TroubledMind. Yay!

The front panel has been through the mangle a bit, but most things are the same.

Edit: Just noticed that the out ports are off in alignment. I’ve fixed that but the change won’t show up until the final version. The ports work OK, they’re just “off”. 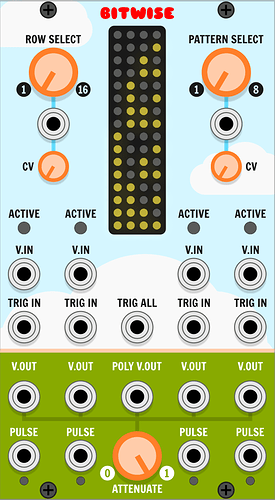 You can download the beta 2 binaries for Linux, Mac and Windows on GitHub.

Also the documentation for the beta has been updated slightly.

The second beta should just be a drop in replacement for existing patches. (Fingers crossed!!)

Provided I don’t spot anything which causes Bitwise to go nuts, I’ll give this a week and then submit it to the VCV Plugin Library.

Thanks for all the feedback so far. You people are just the best. Like the best things on the best bus going to the bestest festival at Bestville.

Just fooling around with this on linux - great fun!!!
But it NEEDS the hamster logo somewhere - under the light grid perhaps

Ha yeah that would great!