Thanks chaircrusher, much appreciated. Let’s see what wonders I can perform with it, is there any paid for modules by any chance?

Looking quickly - there’s VCV Pulse Matrix, VCV-Host, & in Host I use the Audiothing Wires VST and the UAD Precision Limiter VST on the master.

So you can load the patch and find different drum sequencers, delete the Host-FX and go from there.

Thanks, I have the Audiothing Wires demo version, got Host, so what does Pulse Matrix actually do, I haven’t taken much notice of it. It wasn’t in the sale when I bought Host and Soundstage.

what does Pulse Matrix actually do

Trigger Matrix is a drum sequencer. You can use other pulse sequencers. The closest analog might be the mscHack 6x32.

Never done this, linked to another post in Community, we’ll see how that works. This is playing with Hetrick Dust as a clock source.

DustClocks.vcv (250.5 KB) I think this one only has free modules. It’s sort of randomly clocked FM-Op Steel drum music. For bonus points the rate of random triggers from the Dust module is modulated randomly by a S&H driven by another Dust module. So I’m like XZBit - I put some random on your random, dog. [image]

There’s one trick I like so much I have to force myself not to use it over and over:

I have a main sequencer running, a @jeremy wentworth NoteSeq that’s stepped between patterns with a @stoermelder 8face, so it’s a single 32 bar pattern.

Then I use a Bernoulli Gate to on the triggers coming from the NoteSeq, to pick a note every so often and sends it through a VCV Chord module. Both the main sequence (and the eventual bass sound that comes in) run through instances of Probably Note using the same scale settings. So you have a main lead sequence, and the chords that play every soften that’s musically related to the lead sequence.

Running Chords’ note output through a Probably Note quantizer with is fun because it constrains the chord notes to the scale, but the chords it play change because of quantizer selecting a ‘spread’ of notes from a scale instead of the same ones every time.

Hello again, please do you have a screenshot of where all the modules are in the patch. It came up with a list of the modules I have not got-VCV Pulse matrix-Pulse seq? VCV Chords and even Vult modules-I have the free ones. Sorry to bother you, I was looking forward to playing with this patch as well. Oh well such is life!

Hello again, please do you have a screenshot of where all the modules are in the patch. It came up with a list of the modules I have not got-VCV Pulse matrix-Pulse seq? VCV Chords and even Vult modules-I have the free ones. Sorry to bother you, I was looking forward to playing with this patch as well. Oh well such is life!

I can look at the patch and try and make a free version. There are free chord modules, pulse matrix is just a drum trigger sequencer,and I can replace the cult modules with the free versions.

Thank you for doing that. Much appreciated, NYSTHI do a chord module, Impromptu as well. Drum trigger I can use, can’t remember it’s name but it has purple buttons for triggers! Vult free are still good, so all is well. Stay safe and healthy.

you also might want to consider kicking a few bucks to these developers and buying some paid modules. They certainly are cheaper than most VSTs or any real hardware module. just sayin’

True enough, all the points are valid! I have bought some of the Vult modules-Incubus and the mysteries I think, also bought Slimechildaudio’s Substation. So I’m not a total tight wad!

This is 3 Kontakt sample instruments - Viola, Cello, Piano. Then some bass bass, and drums.

I generally put up my Rack patch but I enough things in this: VCV Pulse Matrix, VCV Host, Kontakt, Eventide Black Hole reverb.

It’s just one drum pattern but it seemed to not get too tired what with the other chaos swirling around. 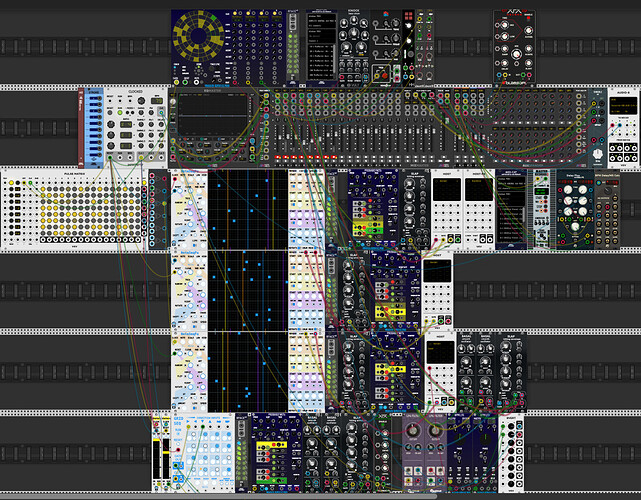 I don’t know if everyone knows that they can click the 3 dots in the audio player and it will let you download the file. It’s an MP3 file that will probably be changed or recorded over, but if you collect such things, knock yourself out.

PS Please don’t take my music and release it under another name. I think I’ve done a pretty good job of copy-protecting them, by making music no one else wants to steal, but just so you know.

This is a tryout of the new @computerscare “Horse-A-Doodle-Doo” random sequencer. Info about how to get it here.

It’s actually a very strange beast. As I understand it, there are a series of preset patterns that you can’t change. But since changing parameters (length, density, pattern) radically alter the note sequence coming out of it, there’s no real limitations on what kind of mostly-adds-up craziness it can generate. If you leave the knobs alone what it plays will (eventually) repeat. Just tweaking the sequence length with a knob is endless fun. 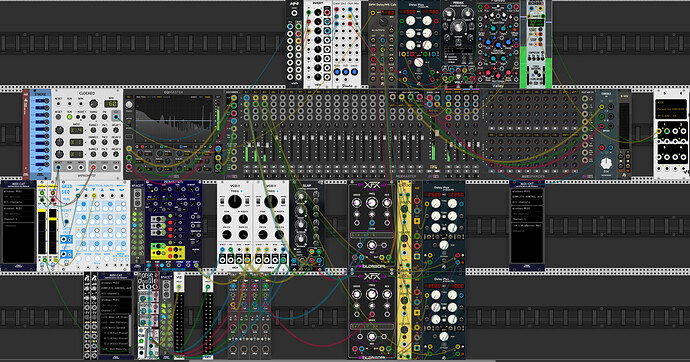 This one is another exploration of what you can do with simple FM. Sometimes FM depth around 2 to 6% has this spooky sound to it. The samples I recorded over this amazing site that runs a SDR radio system that lets you listen to and record shortwave broadcasts from all over the world.

The twittery stuff is some ring modulated XFX-Wave blips run through lashes of echoes. I don’t really think of this as a complicated patch. It’s 4 FM-Op oscillators sequenced by 2 instances of Nysthi 5 Step sequencer. The 4 FM-Op are FM-ing in a ‘ring’ by the signal from that oscillator after it’s passed through the VCA, meaning an FM-Op is modulating another oscillator only when it’s playing a note. So you get these occasional overlap where the sound is thoroughly modulated, and all these flute to sax to trombone transitions on each note. I provide the patch for informational purposes but it uses a bunch of paid modules, and I’m not including the samples I used. The core idea is all free modules, and you can wire it up yourself. Will do you good. 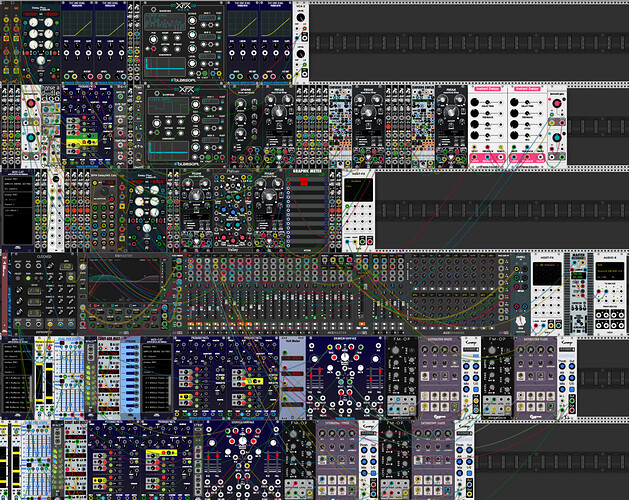 It’s that old techno grandpa advice: Get enough channels of stuff going that you can make a track just changing patterns and riding mutes.

How are you accurately quantizing in your colundi pieces? if I’m not mistaken and you use the Octave shift on the scala quantizer, it’s not actually colundi anymore cause it’s just transposing it down rather than accessing the specific frequencies that are lower. most of the sequencers and cv sources I’ve tried are way too high or too low and its hard to attenuate accurately and keep it “colundi”

It’s anyone’s guess what a correct Colundi is. in the end I can’t make myself care. You have to really work to conform to volumes sequence and its a moving target besides. I’m more into prime ratios tuned scales. If you’re going to be mystical about scales, go Pythagorean.

This one is another exploration of FM passing between different voices, this time with the @Squinky.Labs Kitchen Sink Oscillator. Each voice (implemented as a pair of Kitchen Sinks) is driven by @jeremy wentworth’s GridSeqFu.

I have to say that it was worth trying out Kitchen Sink, because when you FM it, it has a much wider range of timbres before it goes really sour or noisy. It can do a sound that varies from a flute to a saxophone blown very quietly. Or bell sounds.

And as a matter of musical philosophy, having two voices FM each other establishes an interrelatedness in the timbre domain. If two notes make a harmony, that harmony is reflected by the timbral change of the them FM-ing each other. The added FM overtones add notes to the chords.

And I don’t know exactly what happens when you FM a Kitchen Sink with a polyphonic signal. Does the voice on the input affect the corresponding voice in the Oscillator?

Oh forgot to mention - NoteSeqFu generates polyphonic note output up to 16 voices. This patch has two instances for a total of 32 voices. 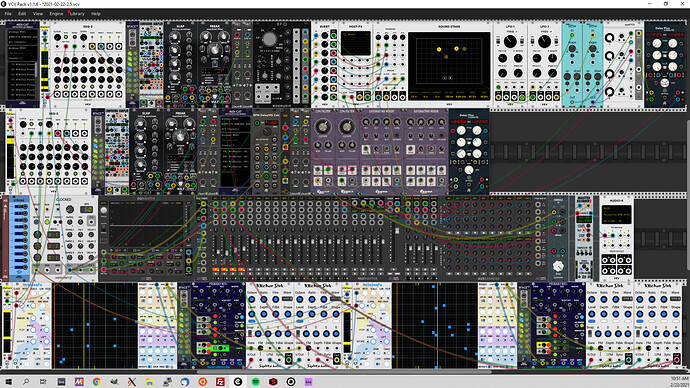 As far as Poly, there may be a bug, but what it’s supposed to do is channel ‘n’ of VCO1 will FM modulate channel ‘n’ of VCO2. So far poly inputs it should just be a poly version of the mono path. But for sure there could be bugs in there.