I remember that now. I use FM-Op a lot for this kind of thing but end up right-click entering FM depth amounds like 0.05 because it goes insane so quickly.

I like how the patches I made with FM-OP sound, but I really appreciate the wider sweet spot that Kitchen Sink has. And I’ve not even tried the wave shaper either.

I feel like this oversampling thing can turn into an ‘arms race’ like how they started out with 2 blades on disposable razors and now they’re up to 5. “F*CK IT! I’M GOING TO 16x Oversample EVERYTHING!”

Seriously though I wouldn’t mind a context menu option to jack up the oversampling in Kitchen Sink. I don’t know what the point of diminishing returns is when it comes to oversampling. I do know that having higher oversample rates on a per-oscillator basis is a more efficient way of e.g. using higher sampling rate for all of Rack.

For sure it can be a pointless arms race in the world of commercial software. In VCV there’s not much of an arms race - there are way too many modules that alias like crazy.

In most applications I find 4X is plenty. Some of my modules do allow you to choose (Like Shaper and Saws), but I don’t like cluttering things up with useless features. So some modules (Kitchen Sink, Stairway, Functional VCO-1) do have oversampling, but don’t have any control over it.

The 8X thing for internal feedback does bother me, because frankly I made Kitchen sink to be strictly better than the wildly popular FM-OP, so it’s almost a point of (lost) pride to miss the mark there. Maybe an option is a good idea. Or maybe there is some trick to make the internal better.

FWIW most of my modules that use 4X oversampling don’t use an excessive amount of CPU - I try very hard to get both good sound and good CPU usage. One notable “failure” is “Stairway”, which is a really cool sounding filter, but it is a complete CPU pig. Maybe someday…

Sometimes I wonder if it’s better to be mysterious about how things are made. Then I think nah…

This is another @Squinky.Labs Kitchen Sink FM production.

There’s one @jeremy Wentworth NoteSeqFu into a Frozen Wasteland Probably Note Quantizer. It’s a pretty simple scale somewhere in the vicinity of pentatonic.

The clocking and sequencing are weird. The 6 Kitchen Sinks go into VCAs modulated by three instances of Frozen Wasteland Drunken Rampage. The Rampage is set to to cycle.

Then I combine all the EOC triggers and use that to drive the NoteSeqFu. The pitches don’t shift exactly at the same time the note starts. And there’s something weird in the voicing coming out of NoteSeqFu. Nothing I can’t role with but since all 2 oscillator voices are free running, sometime there won’t be a new pitch into some of the oscillators until it hits a particular polyphony count.

And again the voices FM each other in a ring, with low modulation depth which just puts a weird cloud of harmonics around the fundamental without obscuring the root pitch. I guess it depends on your ears but the inharmonic sideband that FM adds sound kind of jazzy.

oh, that is pretty cool sounding! I wouldn’t say the enharmonic stuff is “jazzy”, but for sure it sounds interesting with the more harmonic stuff. Like it works together even though there’s no obvious reason it should. Which maybe is what you mean by jazzy. yeah, good stuff.

Third version of Dashpot. My real gripe with the earlier mixes was that they had too much piercing high frequencies. I want this stuff that is rich harmonically without sounding like a bad day with my tinnitus.

There will probably be a subsequent mix with things trimmed to where the recording overloads. I think you almost always have to use the -6dB pad when recording the output of Mindmeld Mixmaster.

4th Dashpot. I like adding quiet layers of noises.

One I made, performed, & mastered today.

OK so this one was done to explore a complex feedback model with a simple AS Delay Plus.

Instead of cranking the feedback on the filter itself this patch uses a mixer with the effect sends as 2 inputs and feedback from the filter output into the other two. After the filter there’s an overdrive and chorus module.

Using the Audible Polarizing mixer you can flip around between positive and negative feedback. The Chorus module has the delay time and LFO rate modulated randomly. When you turn up the feedback you get weird modulated chorusing sounds.

Oh and there’s a limiter before the output feeds back to the delay input which will tend to keep the feedback from running away completely. But you get these wierd atonal wobbles going on in the stereo field that really does your head in with headphones.

Drums are from a Frozen Wasteland Quad Algorithmic Rhythm sequencer. I’ve used this a lot before, but the issue always seems to be that the QAR is easy to get in a state that makes the listener’s ear lose track of where the beat is, so I use a logic OR from Submarine to combine the QAR triggers with a more regular kick and clap pattern.

Nice, again. I dig your stuff.

This is maybe more suited in a different section and slightly unrelated, but I seem to have seen a module that’s specifically designed to easily master-shift triggers around to match a tonal sequence’s 1, as perceived by your brain, to a beat’s 1. Is there? Or did I dream of it?

I don’t know what you’re talking about but it sounds cool.

This does sound wonderful, please can you provide a picture of the patch, so I can see the cabling and set up, would really like to try this on my patches. Have you tried Hora Delay effect module? It has a lovely reverse delay setting. Gives delay a whole new dimension! Thanks much appreciated.

if you like reverse delays, then you should check out Portland Weather

Thanks Eric, I have dabbled with Portland Weather in the past and got some decent results out of it, gonna have to master the reverse mode. What does it work best on, or will it mangle any/alter any sounds?

I haven’t tried it. What I mostly try to do with QAR is not have it sound too wonky.

Honestly when I do a patch like this I think it’s of limited utility to download, unless you just want to steal that sweet dubbed out delay where I put a bandpass filter and a compressor in the feedback loop. There is a sample of Chinese National Radio playing this kind of lounge-y arrangements of Chinese folk songs you won’t have. Most of you won’t have all of the paid modules I use.

Again this is a live take - I have channel mutes mapped to the black keys and preset changes on the sequencers mapped to the white keys, so I can build an arrangement as I go. The main thing I will probably change is to turn down the Crackle noise bed. It could be about half as loud and get the job done.

The sequencers are all quantized to the same slightly oddball scale I made in Frozen Wasteland Probably Note. There’s a fat Major chord in the middle and a couple of possible tritone intervals. It’s really hard to not want to use the pentatonic scales because there are no possible minor seconds or tritones. But it’s more interesting to come up with wonky scales that don’t fit the modes.

The sequencing lash up for the main sound (Squinky Labs Kitchen Sink) is suitably wonky. It’s a SEQ3 that’s clocked rather conventionally, but the actual note gates come from Bernoulli gates driven by the 16th note clock.

This interacts nicely with the Probably Note quantizer, because it has a trigger input. It has a built in polyphonic sample & hold, so the gates used to sample pitch CV is used to trigger the VCA, running independently from the sequencer clock in the SEQ3.

That’s always a fun trick: Use a sample & hold on the pitch output of a sequencer. The sequencer runs at an arbitrary rate, and you use Sample & Hold to grab pitches with a different clock. So the note stream out of this arrangement is sort of contained in the sequencer, but the notes you grab from the sequencer don’t align with the sequencer’s grid.

Oh and the whole rational for this was that I wanted to use the 3 rows of SEQ3 for 3 notes, but didn’t want to use the single gate output of SEQ3 to trigger the VCA. If you do that it will play perfectly synced chords, but that isn’t rhythmically interesting. 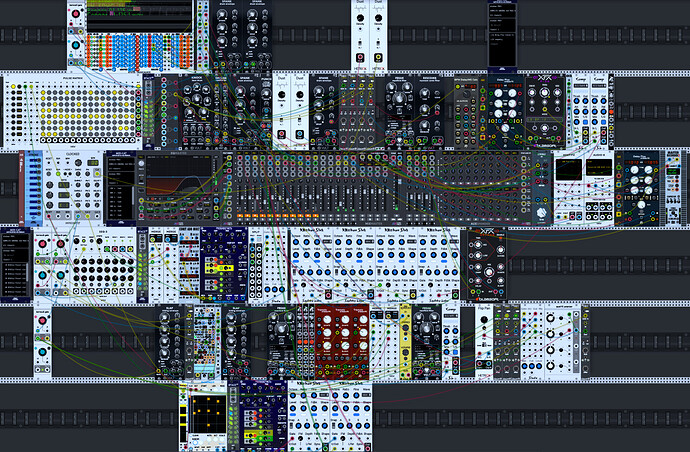 LOL When you have to scale rack down to 33% just to take a screen shot, you know your patch has gotten out of hand. As per usual a live jam - there are places things come in kind of raggedy. white keys change sequencer snapshots, black keys are channel mutes.

The central sound is a shortwave recording, where it’s receiving 3 different stations at once. That’s being randomly chopped up. The sound goes through 3 different bandpass filters and delays so it gets spread across 4 stereo channels. It’s a fuzzy ASMR noise chorus that started out as a man reading the news, a gospel preachers talking, and some unidentifiable music.

The sustained pad sound is a similar sort of messing about – It’s playing chords from VCV Chords so it’s a polyphonic 4 voice chord. I use VCV Split to separate out the 4 voice. Each voice then goes through an AS Tremolo and gets recombined back together for one stereo channel on the mixer. 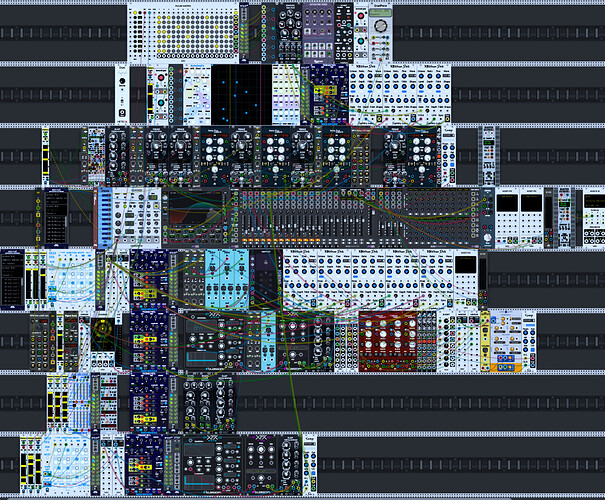 I can sort of play guitar, but I don’t do it often enough. Just doing this made my fingertips tender because I don’t have calluses. I set up a sort of looper with 3 Nysthi Confusing Samplers all sem-randomly recording and playing back live guitar. Since I have whatever the opposite of rhythm, I went the other direction and tried to play as out of time as possible. You can also hear my office chair creaking, and I whistle a bit.

The Confusing Simplers get triggered semi-randomly by Bernoulli Gates, so the can capture and repeat anywhere from a fraction of a second to minutes of audio. It’s the sound you’d get if you had your average bro with a looping pedal, but you gate the looping pedal LSD.

This is the same patch but it’s getting fed by a sequenced synth voice.

I used a crossfade so you could mix them before they went into the Confusing Sampler wood chipper.

Oh shit what does it do if I turn on slicing,and keep recording/playing back the input?