hello, i try to build Rack on fedora with pipewire. this implies, that there is no jack, only an emulation with pipewire. because the majority of my audio software works and compiles, it seems, that something is wrong with rack building. Can anybody help out, whats going on. one idea is, that the jack library sits in /usr/lib64/pipewire. is it possible, to let configure check in this library path?

I don’t know much about packaging on Fedora but on Ubuntu you’d probably need the libjack-dev package (or whatever it’s actually called) rather than the actual jack package. The dependencies for ubuntu:

hmmh, that does not work on fedora, because jack package including dev is emulated with pipewire-jack. if i want to install a jack-server / library, i have to uninstall pipewire complete. Because the emulation could not live beside each other. i tried the flatpak of rack also, but there is no jack. this is usually a signal of a not correctly build. i have read this… any ideas?

You could use the regular package provided by VCV, that certainly has jack and pipewire jack support and you could at least see if Jack works in that - if Jack doesn’t exist there for you then it’s an issue with your system/configs I think.

I’m surprised this doesn’t work though and wonder if something is amiss, I’ve built a few things without jack installed and haven’t had any problems like this on arch (there are no dev packages there either). As far as I’m aware, pipewire links to all the things that jack used to provide so there should be libraries there to build from, although not 100% sure about this.

I’m guessing the make dep for rtmidi has to be modified to include the path.

similar to some degree: does not detect jack if provided by pipewire-jack-audio-connection-kit-devel · Issue #5678 · supercollider/supercollider · GitHub (Sorry, I don’t have a fix, I have no fedora install right now)

thank you for this info! i tried it, but with no luck. but it seems, that jack is found and a function inside jack not. is this true? perhaps old code?

Sorry, I gave up for now.

thanks for your ideas. will wait, if anyone manage it to run Rack with pipewire.

I’ve just built Rack on Arch with pipewire and it’s working fine for me, I can see alsa, pipewire and jack outputs.

Fedora 37 Workstation:
I got it to continue building by making a link to libjack.so somewhere ld looks:
hint: ld -ljack --verbose 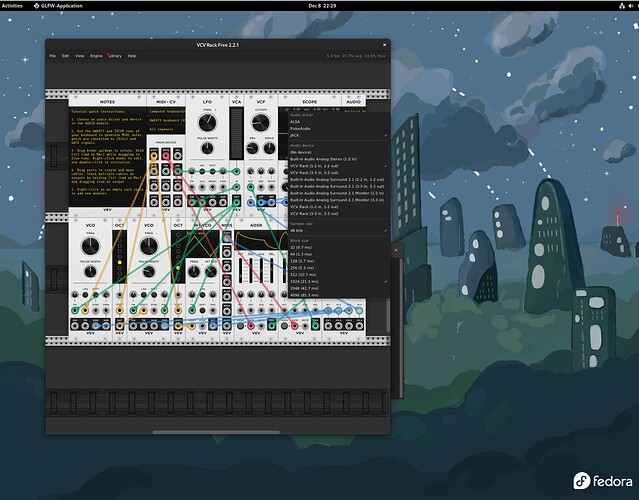 Rack 2.2.1 Free on Fedora 37 Workstation using the pipewire jack connection. (in a Virtualbox on Windows 11)

i successfully build rack here with fedora 36. the link helps to find jack. but unfortunately the audio and midi connections are not shown or strange:

does anyone knows how to dig into?

did you have these installed ?

yes, i use them for most audio software compiling. i’m not a developer, but i think, that rack is using some low-level functions from jack / alsa. because usually alsa is not available, if pipewire is activiated. other software is just show up in qpwgraph with ports. temporally i compiled rack without alsa support. result is, that alsa is not available (sure), but no ports in pipewire, especially no output ports. input-ports are shown from mutter??? does it help?

Hi @karlderletzte, I don’t know anything about pipewire (or development for it), but I thought I would post this in case it is helpful. What version of the C++ compiler are you using?

I ran into problems building Rack that can load most plugins. It turns out the problem was I was using g++ older than version 12.2.0, which caused more than half of my installed plugins to fail to load. I know this is not the same as your problem, but… maybe it’s useful?

I ended up building g++ 12.2.0 from source. Then I used that to build Rack. Now I have a fully functional VCV Rack built from source.

Also, have you looked in your log.txt for any clues you can post here?

When you run Rack, it creates a log in its user folder. On Linux it is usually in $HOME/.Rack2/log.txt.

and here is the screenshot from pipewire. 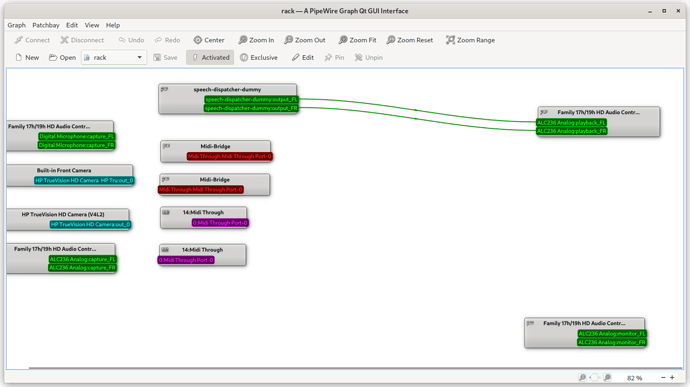 as you can see, no ports from rack

Hmm, I didn’t see anything interesting in the log file. Maybe someone else knows more about this?

Did you make any audio connections in an audio module ? 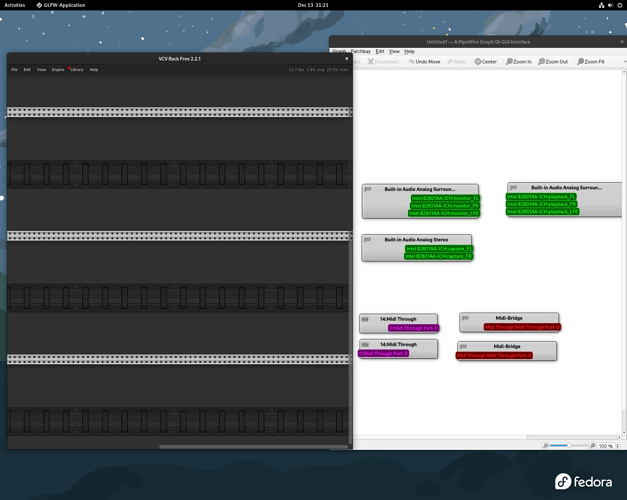 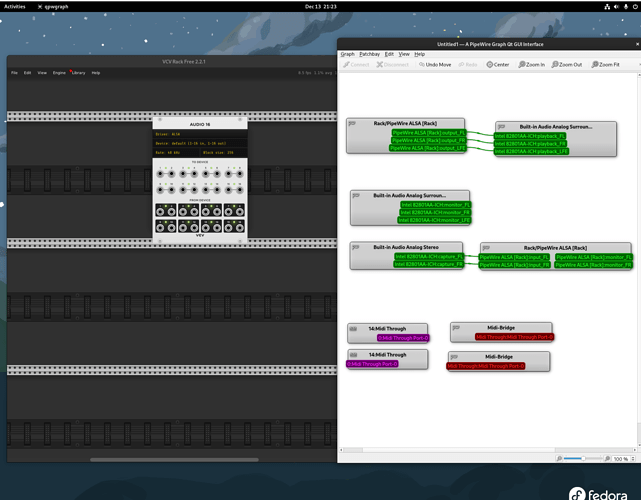 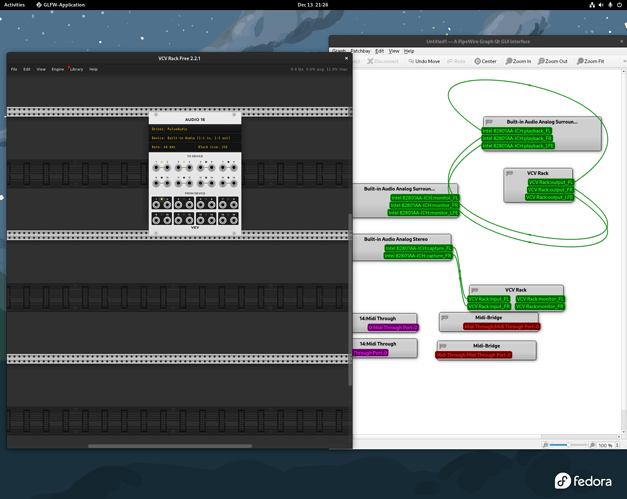 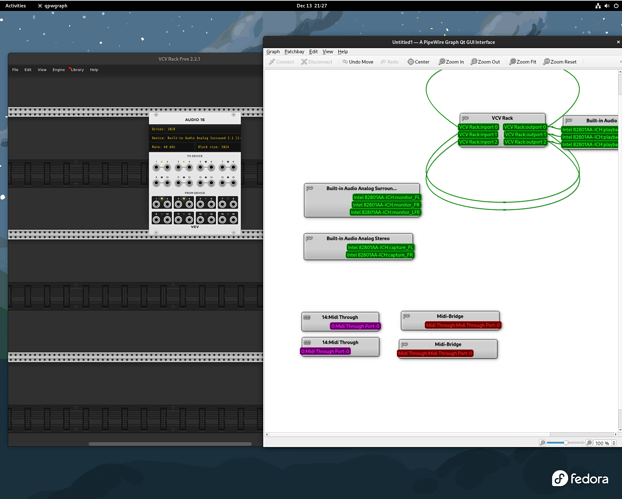 hello, this is exactly the problem here. if you see, there are no vcv ports. 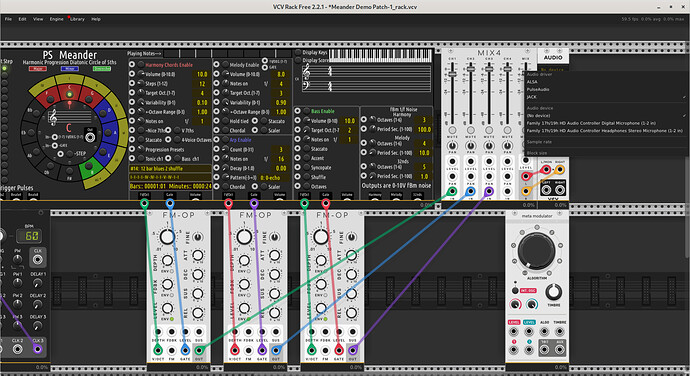 i dont know why. no errors during compiling and log shows nothing sprecial