Audio Module "clip" signal before sending to the DAW?

I’m not able to output the signal “as-is” to the DAW: 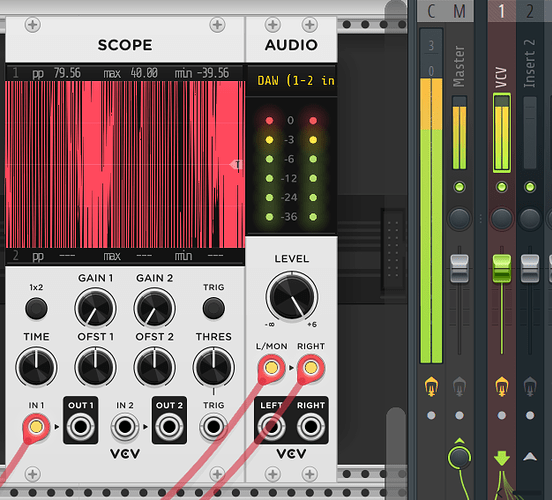 How can i pass to it without any internal clip?

Looks like you need to reduce the levels of the signal in your patch before sending it to the audio module.

What is generating the signal in your patch?

Looks like you need to reduce the levels of the signal in your patch before sending it to the audio module.

I need “higher” as I want, no need to reduce it.

Rack works on primarily on voltage level rather than dB level. The Rack voltage standards state that 10V = 0dB (and 5V = -6dB). Any signal you send that is over 10V (0dB) is going to clip. There is no headroom above 10V / 0dB

Edit: I see now you have your audio module level set to +6dB - so what you seem to be saying is that Rack will not output more than 0dB (10V). That’s correct as stated in the Rack voltage standards. Anything above 0dB on a digital system will clip so not sure why you’d want to do that anyway.

How can i pass to it without any internal clip?

There are tons of reasons. i.e. gain stage and process on DAW the saturation part (such as amplifer).

Rack VST should work as a tool :slight_sm

Again - anything above 0dB in a digital system will have digital clipping - which is something you want to avoid. This is harsh digital distortion, not nice analog saturation.

No processing plugin in your DAW is going to respond well to an input signal that is above 0dB.

I can’t think of a single good reason why you would ever want to send signals hotter than 0dB out of Rack to your DAW. But if you have a specific example use case, please share it.

Have you ever tried Guitar Rig? Or Trash2? Just 2 simple examples! They “love” huge input signal.

Basically every DAW I tried won’t clip over 0db (think about ReWire); just as every Mixel channel on every DAW pass the signal as it, within the chain.

It should be a task of audio driver and/or DA converter… just the end point.

Also… Do you store RAW samples clipped? Not really. Thats the good thing about digital and its huge depth…

Just don’t clip the signal inside vcv but boost it (to whatever dB you want) after it enters your DAW.

Have you ever tried Guitar Rig? Or Trash2? Just 2 simple examples! They “love” huge input signal.

From the Trash 2 manual: Setting your input level: As a starting point try setting Trash’s input level so that the input meter is peaking in the yellow area of the meter. It is OK if the input meter occasionally goes into the red when Trash’s Limiter is enabled, it will keep the audio from clipping.

[so Trash2 can deal with occasional peaks above 0dB, because it has a built in limiter, which will reduce the level of those peaks to prevent clipping before the signal goes through the plugin]

Caveat: Soft Clipping circuits give you a little extra headroom - maybe +1.6dB or so irrc - and while signal in that range will clip, it will clip ‘nicely’ as opposed to harsh ‘flat line’ hard digital clipping. Anything above that will still hard clip even with soft clipping turned on.

Aren’t most DAWS recording 32 bit float, it distorts like crazy when pushed to far over 0dBFS but they never CLIP ? So normalizing the wavs will return them to something nice.

If you like that type of sausage audio just use a clipper or limiter module before your audio module instead of using the audio module as a clipper/limiter. And then boost the signal in your DAW if you need to.

@steve what you says is not correctly true imo, mostly subjective

When you are within the digital audio domain, levels controls are under user’s responsabiilty. I mean: have you ever seen any audio fx plugin that clip signal above 0db? Such an EQ that at the final gain stage do hard clip manually? Quite never in my life…

The same VCV Rack modules which claim to follow “Eurorack Standard” do this and don’t care: 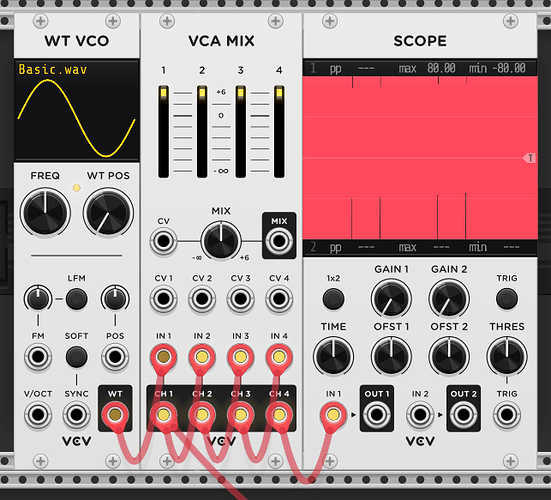 And honestly, the same happens to major manufacturers which develop for Rack.

The signal’s path level shouldn’t be limited by tools: they are there to permit any kind of stuff. For example: I like to pump up the volume (of course above 0db) and process later by FL Studio “native” Limiter (which can’t be opened directly in Rack, of course): pretty nice effects for me.

Is that legit? Yes! Should I be limited by Audio Rack module when I want to generate the source on Rack instead of within the DAW? No!

That’s the point. I think the only way is to put down the volume -30db on Rack and then boost within the DAW +30db, as suggested by other users.

As usual: a simple “option” within the module should be enough (i.e. Clip Mode On/Off, On by Default for “usual people”), so every user can decide how to deal with audio.

What’s your opinion about?

P.S. it also seems that Audio Module Meter is wrong (showing -12 instead of -6): 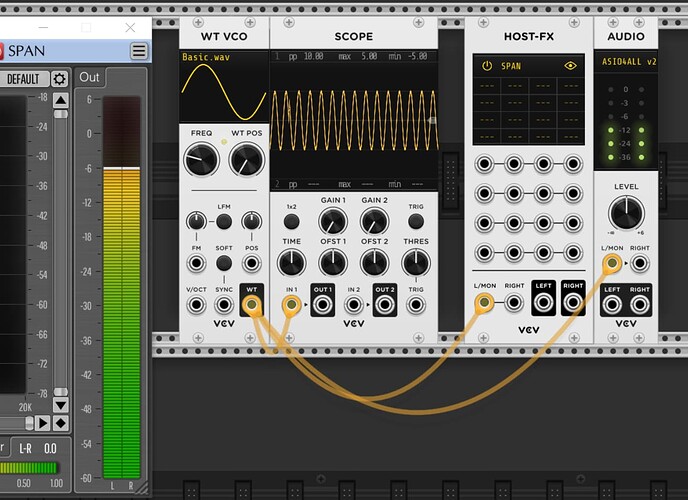 The signal’s path level shouldn’t be limited by tools

Sounds like you would be very happy if you developed your own audio tools instead of using tools like Rack.

What’s your opinion about?

I think you have received everyone’s opinion, which is different than yours. It will just be going round and round in circles from here on.

Sounds like you would be very happy if you developed your own audio tools instead of using tools like Rack.

I did since long time.

But here we are discussing Audio Module, which does Hard Clip and is part of the Rack’s infrastructure (not really a proper “tool”).

I don’t know if this helps or not but in Eurorack many digital modules clip signals too. It is a real pain at times because everybody likes to drive analog filters hard, but the signal they produce when you do so is problematic if you are putting them through digital effects units for example. They have to be attenuated. I have to have attenuation sitting in front of my FX Aid for much of what I put through it. When I look at all the screenshots above I can tell that the signal will clip without even thinking about it.

That’s the point. I think the only way is to put down the volume -30db on Rack and then boost within the DAW +30db, as suggested by other users.

Perhaps I’m misunderstanding - but if you reduce the level by -30dB in Rack, and then boost it by +30dB in the DAW, that just gets you back to 0dB - which is basically the same as sending out audio at the 0dB max level handled by Rack and doing no further boost in the DAW.

If you want signal level to be above 0dB in the DAW, then send out of Rack at 0dB (or just under so there is no clipping) then boost by whatever amount you want it to be over 0dB in the DAW.

I meant: since Rack’s Audio Module (and only it apparently) hard clip my signal to 0db, before to send it to Audio Module (which will clip and send “clipped” to the DAW), I reduce it to about -30db (should be enough). Than on DAW I boost it up back.

OK well I do think we are going in circles here a bit - a simpler version of your example would just be Send out of Rack at just under 0dB and boost by 20dB in your DAW to end up at +20dB there.

Recommended max level for audio (as opposed to CV) signals in Rack is ±5 V (about -6dB).

A couple of things to bear in mind:

Rack is a Eurorack simulator - and Eurorack signals are generally limited by their power supply to ±12V. If every doubling of voltage adds about 6dB, then a +20dB signal is going to be something over 40V which is not possible in Eurorack and therefore is outside the scope of the simulator.

The Audio module is an output module. It makes sense to have a clipper on an output module to protect external audio equipment. Sending out +20dB (or more) signals would generally not be a good thing for people’s monitors/headphones/ears.