This is probably common knowledge already but I thought I’d post it, in case it’s helpful to someone.

The Swiss Army Knife module known as Audible Instruments::Segment Generator (aka. Mutalble Instruments::Stages) is capabable of being both the master clock and also a clock divider or multiplier in your patches, all in the same instance of the module. Each individual stage is capable of dividing or multipliying a clock by 1, 2, 3 or 4, and by cascading their outputs to their inputs you are able to achieve very high or low values of multiplication/division, to many different rates. 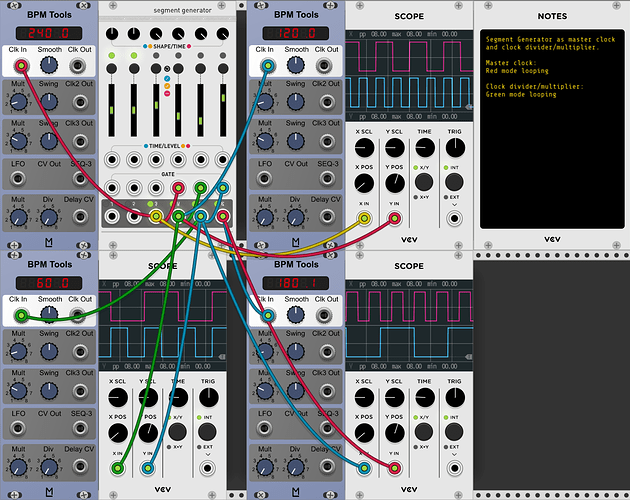 To get square waves for all the clocks, all the involved segments have their shape knob at the top of the module, turned all the way to the right.

Counting the segments from the left:

Segment 4 is used as the first clock divider, by leaving it in Ramp Mode (green light) and then again click+hold for 2 seconds to make it loop. The output of segment 3 (master clock@240 BPM) is fed to it’s input, and the output of segment 4 is now a divided clock, by pulling the slider down to divide by 2, thus giving a clock rate of 120 BPM.

It’s worth pointing out at this point, to alleviate possible confusion, that you don’t need to chain the outputs/inputs of the clocks like I do here, to make clock dividers/multipliers work. You can feed them with any clock. I am chaining/cascading them in my example to illustrate the feasability of tying the divisions to a common clock, and achieving many different divisions/multiplications of that clock, up to very high or low rates, because the effect is accumulated.

As a little bonus info, it might be worth mentioning that you can also adjust both the duty cycle (pulse width) and the amplitude of a clock, by using an additional segment. Put the segment in Hold Mode (red light) but not looping, and feed the clock to it’s input. The amplitude can now be adjusted by using the slider, and the duty cycle can be adjusted from trigger (slim width) to max-width by using the shape knob. Using a scope during the trimming is a good idea.

I hope this was somewhat illustrative and usefull to someone. Using the Segment Generator for clocks, dividers and multipliers is just one of the many uses of this wonderfully crazy module, which has a bit of a learning curve. I recommend watching Omri Cohen’s nice tutorial on the module, or DivKid’s video of Stages if you want to go all-in

my only problem is how to get the stages to an exact bpm, I tried it to set it to 240bpm,
just to understand how it works, but I was not able to get exactly 240,
the closest I get is at 240.6, I also tried inject value, but that didn’t work either (may be my fault)

When you adjust the slider, hold down the Control-Key (on Windows and Linux, Command-Key on Mac) whilst using the mouse, to get fine-grained adjustments. This works with every control in Rack. Also, the BPM Tools module I used to illustrate BPM is not the most realiable measuring device. Try for example instead to use the “Alikins: Specific Value” module, type in the desired BPM value in the LFO BPM text box, and connect the output to the Time/Level input of the clock segment.

I’m using the crtl key often but in some modules the resolution is not fine enough for really subtle adjustments.
I will try the specific value module

edit:
I tried the “Specific values” and I needed to enter 241.5 bpm to get 240 bpm in the BPM tools and in AS BPM delay/hz calc

I tried the “Specific values” and I needed to enter 241.5 bpm to get 240 bpm in the BPM tools and in AS BPM delay/hz calc

Great explanation. Thanks for taking the time to write it!

Fiddling around with it a bit, it seems like the Time/Level inputs for Segment Generator doesn’t quite match the Rack BPM CV standard

With the fader in the Shape/Time section at it’s default (param value 0.5) the clock outputs are a little bit faster than the BPM standard. If you slide the fader just below it’s default/middle position (to param value 0.4962 [1]) it get’s pretty close. 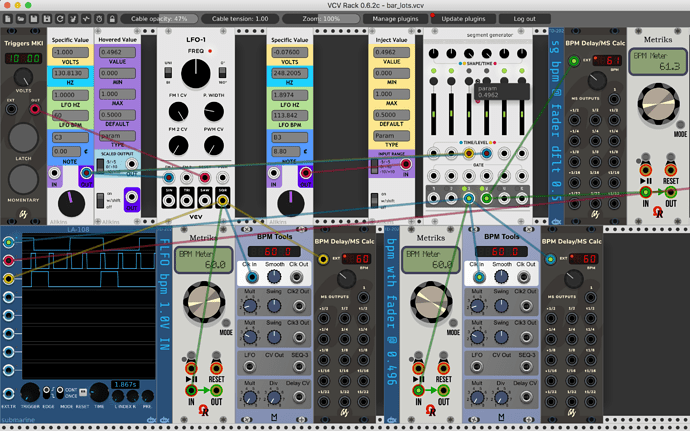 [1] It seems like using the clock output from Segment Generator this way depends a little bit on the engine sample rate, at least there seems to be a diff at 44.1khz vs 48khz (about 0.1 bpm at 60bpm)

[1] It seems like using the clock output from Segment Generator this way depends a little bit on the engine sample rate, at least there seems to be a diff at 44.1khz vs 48khz (about 0.1 bpm at 60bpm)

Or maybe more generally, changing the engine sampling rate changes what BPM the BPM detection tools calculate from the Segment Generator output. I don’t know if the SG output changes or if the BPM tools change behavior or something else.

Good checking Adrian and I concur with your findings. At the default setting (== CV of 0V) Segment Generator LFO’s should operate at 120 BPM, but instead it actually runs at 122.7 BPM. To get exactly 120 BPM it takes a CV value of -0.03 V. 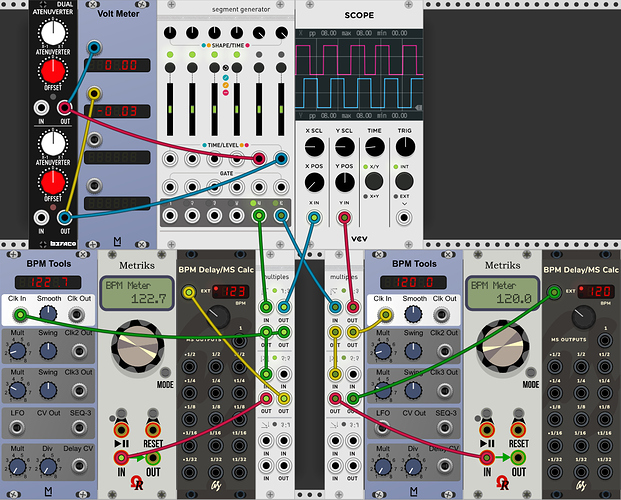 Maybe something for @Vortico to look at, although I’m sure he’ll utter the magick words github issue. Come to think of it, maybe it was @JimT that finished this one? Can’t remember if it was this or another one…

thanks so much for posting - this is great!

I created an issue in github regarding Segment Generator not following the voltage standards: https://github.com/VCVRack/AudibleInstruments/issues/75

I’ve been using VCV for a long time now but I am shallow (i.e. I use sequencers, drum modules, and synth voices, as opposed to doing anything the cool ingenious ways) so I didn’t know this. I don’t know how to properly use half the Audible Instruments pack. You have just improved my life by a cent.