my first plugin, “alef’s bits” is now available in the library, and has been updated to v2.1.5 already.

i would really appreciate any feedback/issues from anyone!

This is a link to my random test of your modules at - YouTube. I like to S&H module with the volts limits. It make it easy to switch on the fly during live jamming.

The name of the patch is called “Alef’s moving service”.

thanks for checking it out! i’m very much a beginner to this stuff, so it’s exciting to see something i made being used by others

i would really appreciate any feedback/issues from anyone!

I had fun with your “simplex and hold” and “poly rand” modules, using them in conjunction with my Meander module. I’m always interested in correlated noise so I had fun seeing how your simplex noise worked. The “poly rand” worked great for doing a randomized arpeggio of the chords poly output from Meander. By the way, Meander outputs its scale, which I run into Grande Quant and use that to quantize your simplex noise. I haven’t played with your “simplex vco” yet.

Everything worked well. Great job on your first modules.

thank you so much for the feedback!

as for the simplex vco, one thing i know about it for sure is that as it stands at its current state, modulating the parameters on it can sometimes sound… well, not great. i don’t think i fully understood the parameters used in the module i learned from (TinyTricks’ Simplex Oscillator) so things may not have translated 100% to my module when i wrote the code.

alef’s bits has been updated to v2.2.0 in the library, and includes various bugfixes and adjustments, but most notably is the new module ‘noize’ which is just a random noise generator with a ‘duration’ parameter and 0-10V cv input, which holds the random values for longer periods, resulting in some cool rumbly retro noise sounds.

alef’s bits has been updated to v2.3.0 in the library, including two new modules: ‘steps’, an 8 step sequencer inspired by bogaudio’s ADDR, and ‘fibb’, a clock divider with outputs corresponding to numbers in the fibonacci sequence.

i’ve also included a paypal donation link in the plugin, in case anyone ever feels so inclined, as all my modules will always be free and open source.

I’m surprised no-one has ever (afaik) made a paid plugins that’s open source. I would certainly consider it.

It’s been a year, which means Substation is now open source! Check out the repository here: This open-source release includes the source code for Substation for VCV Rack, along with some of its dependencies. It does not include the graphical assets used in the paid version of the plugin, as they are under copyright. Instead, replacement visual assets are provided under the terms of this open-source release’s license. Be aware that Slime Child Audio cannot provide any support or assistance fo…

Oh, of course! Forgot about that. cool.

just a quick heads up for anyone who uses my “alef’s bits” plugin - my ‘in-progress’ SimplexVCO will be removed from the plugin with the next library update, so any patches you have that use that module will break. of course you can always just choose not to update the plugin to keep the module around, but i won’t be supporting it anymore.

just added a new module to “alef’s bits”, in collaboration with @kirkwoodwest who came up with the module concept and designed the panel graphics for the parameter outlines. it’s called “oct sclr”, and it’s designed to scale and offset a signal (e.g. v/oct signals) to a specified octave range. (think bogaudio’s “offset”, but it snaps to octave ranges)

should be available with the next library update. 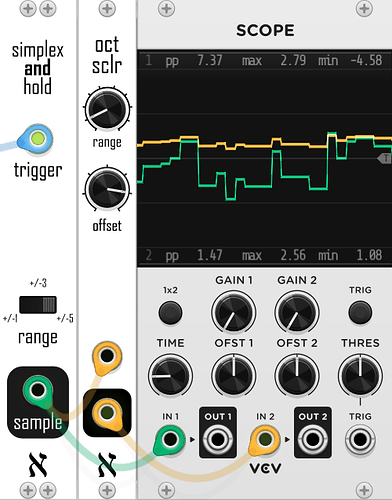 So it’s the top part of this ? or the folder part ?

there’s a slight difference, in that “oct sclr” actually “snaps” to octave intervals. it’s mainly meant to scale v/oct signals down to actual octave ranges. granted this could be accomplished easily by manually entering your desired parameter integers, but we thought it would be useful to have a module that already snaps to those ranges by default.

I hoped it would, I was just proud of myself that I could remember that NYSTHI had a module that could do this.

The Oct Sclr looks cool, I’ve been using this ‘Normaliser’ module to do this, but it’s a bit hit and miss picking out the right ranges.

An attenuator scaling values to an output range.