BUT VCV does not give me access to channels higher than 128 - please!!!

What audio module are you currently using to try and access those Channels - Stoermelder Audio 64?

I never thought someone would have an actual use case for more than 128 channels, but RME HDSPe MADI FX indeed has 192 inputs/outputs.

I think I’ll leave the limit as-is since the use-case is rare, but there’s an easy workaround. Set the "offset" to your first desired channel in your patch file. For example, to use channels 128-143 in VCV Audio-16, set the offset to 128. 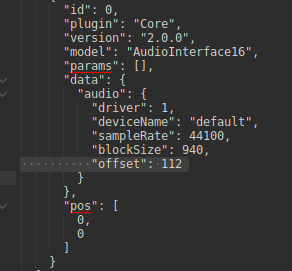 random thought: An audio module using poly channels e.g. Audio-16x16 (256 possible channels) could be another way to access more than the regular 2-4 required outputs. For instance 12 merge modules could be used to output to the poly audio module for 192 outputs.

How many channels could someone possibly use that would produce something discern-able as having that many channels? Even if you mic’d every instrument in a symphony orchestra, that’s still only about 100.

If you have an analog console but use a DAW/tracker, you typically have a DAC for each channel strip.

There’s a couple of different ways to approach that question…

In terms of interfaces, you won’t necessarily want to use all the channels you have at once or for one thing - you will have different channels sending/receiving to/from different kit. For example the OP has all his DC coupled stuff starting at channels 128 - obviously other things on the other channels. He doesn’t want to rewire his studio just to get at the DC coupled stuff he just wants to be able to address those channels from VCV.

In terms of tracks count - I know of plenty of electronic artists like Shpongle for instance who regularly use well over 100 audio tracks per song. More than 200 sometimes I think. I doubt the listener can discern that many channels from the final stereo track, but it certainly helps the producer to be able to separate the sounds and treat them on individual tracks like that.

In terms of tracks count - I know of plenty of electronic artists like Shpongle for instance who regularly use well over 100 audio tracks per song. More than 200 sometimes I think. I doubt the listener can discern that many channels from the final stereo track, but it certainly helps the producer to be able to separate the sounds and treat them on individual tracks like that.

Jacob Collier has done live breakdowns of some of his Logic sessions like that. This one has 358 tracks, but two of those tracks are renders from other Logic sessions so all in all it’s over 700 tracks contributing to one song!

haha yes - i really have a lots of ins and outs - and hooked up fix a lots of gear with a lots of channels in … an CV-channels out … so i really wait hard for your version 2. to really can include VCV into my hardware pieces as a big hybrid setup …

jep!!! i can not rebuild my studio. ive hooked up all the analog ins and outs to my recording console and channels from 1 - 64. ins and outs. 65 - 128 are a lots of filters, reverbs, Software routings. FX like H3000, Mutator, Filterbanks … etc … and 129 upwards are ADATS. Expertsleepers stuff and some Ferrofish DC coupled interfaces …

so. NO WAY TO CHANGE SETUP ALL THE TIME

do i heve to do that outside the “Programm”? - wahhhh

I’m not sure you understood my post. I’m not increasing the maximum number of channels in Rack v2’s UI.

However, I gave you a workaround that should work in Rack v1+.

EDIT: ignore this complete nonsense below!

Yep - This would involve making the code edit and compiling Rack from source.

Might take you an hour or so to figure it out and get it done.

No, this needs just an edit of the patch-file…

You know, as I wrote that, I had a niggling feeling I was completely wrong - thanks for putting me straight.

On the plus side, this means it will take about 10 seconds rather than an hour so all good

That offset trick in the patch file is really useful to know.

can i do that with textedit in my macs finder?

Yes should be fine

and i hope, he‘ll change this whole aufio thing into something more flexible ;))

as it is now i cant play audio from vcv into my hardware and back from there … because i only can use one audio module at a time :(((

not very handy for people with hardware

but maybe better times also for guys with rme madifx cards will come :)))

because i only can use one audio module at a time :(((