Your opinion about modules that open up a separate window

Here is my opinion:

This is great for editing notes in a sequencer and when all windows on the screen are placed carefully beneath each other it might be a solution to go for.

Personally I don’t like working with multiple windows that tend to overlap. For me, the intention behind VCV Rack is to resembles analog hardware. Maybe there are hardware modules that provide a connection to an external screen (e.g. like Teenage Engineering OP-Z whith it’s Bluetooth connection to a touchscreen device, although this is not an Eurorack module but theoretically it could be mounted on a blank panel to place it into a rack).

This leads me to the question of providing two or even more windows as different views on the same rack. Possibilities are endless …

never been a fan of separate windows, but if you use more than one display it can be very very nice.

as usual, the best option is choosing an option

although this is not an Eurorack module

They might as well be VSTs. I will use VST in VCV, but I will generally prefer an equivalent native module if it’s at least ~70% as good as the VST.

The Etrian collection and Host are the only ones in VCV that currently do that, right? If I’m gonna need a sequencer complex enough it won’t fit in a module, I don’t see the benefits of keeping it all “in the box” and using a module that pops up a window, I will use Reason or Renoise over MIDI.

From my perspective, once you use an external window, you now have to compete with every single third-party software out there, instead of having to compete only with what’s already in the VCV library.

I don’t care if it’s on a separate window or separate time zone, as long as it helps me produce sounds that don’t disappoint me like I did my mom.

I have no problem with them. Entrian is great.

While VCV is a virtual Eurorack emulation I personally see no reason in principle why that means slavishly taking on board all hardware limitations and am very open to taking advantage of the capabilities that the digital platform allows for.

There are several issues here. The old “Is it ok to have a UI that isn’t a piece of metal with knobs and stuff on it” and “is it desirable to have windows pop up inside VCV Rack”.

I’m definitely if the camp of you don’t need to make your UI like a physical module if you don’t want to, but I understand people who feel otherwise.

I have to say I’m not a fan up pop up windows, but perhaps they have their place. My Seq++ does not look like a Eurorack module, and it does change the function of the panel for some features - the moral equivalent of a popup perhaps? 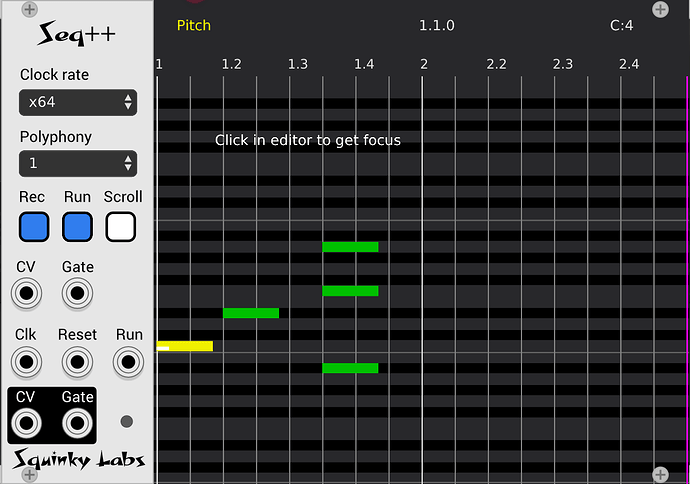 Personally my position isn’t about aesthetics. It’s purely “can I tweak this live”. If I must open a window, I can’t directly tweak it live, because I don’t trust your window to pop up in a predictable state and position fast enough, before the next bar starts.

I don’t see how that would be a problem unless you decide to throw in a module in the middle of a live set, in which case being a pop up window only slightly adds to the complication.

If you use 2 monitors, the things that pop up in new windows are good because you can have an unobstructed Rack in one window and all the plugins/entrian windows in another.

Also if a plugin has a simple UI in the rack but lets you pop up a more complicated tweak window that’s pretty good. Of course the difference is that you can’t patch from the rack window into a plugin’s popup. But for some things it’s a bonus.