I was very happy to find TIMEX, the module that outputs 10v ramps synchronized with the real actual clock time outside the computer - one ramp each for each second, minute, hour, and the entire day.

I discovered a primitive way to create a trigger at a given time, pictured here, using a couple handy Count Modula modules: 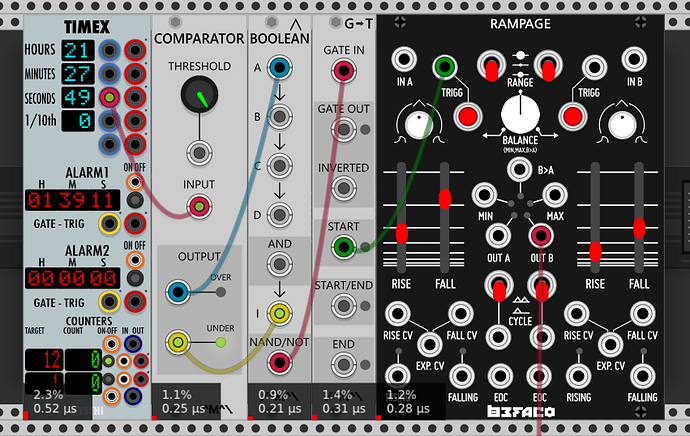 To use this: Convert a time of day to 0-10v (e.g. as I type, the time is 9.0334V); Set the Comparator threshold to this value; when the Timex ramp exceeds this value, the Boolean module turns it into a very short gate, which the G->T converts to a trigger. The trigger will do whatever I want it to do at 9:40 PM.

So: Is there an easier or more efficient way to schedule things using the output of Timex? I would love if there were a single module that could output a trigger when a given CV is received. Bonus points for an array of these in a single object. Has anybody found efficient or interesting ways to put this module to use?

Use the pair of Alarms. Set the first to 21:40:00, and the other to 21:40:01 (or some other time later). Click the led on the first to arm it. Now, patch the trig-out (red ring) from the first to the on/off-in on the second and vice versa. Now patch the first trig-out to the thing you want to get triggered at 9:40pm. What happens is that a trigger is sent from the first alarm at 9:40pm, but it’s no longer armed, so if we want to have this repeat each day, we need a way of rearming it, so the trigger arms the second alarm, and that goes of a second later and rearms the first. I had hoped one could simply patch the trig-out to the on/off for the same alarm, but that doesn’t work, and I haven’t found a built-in way of setting an alarm as permanent.

If you run the trig-outs to a set/reset toggle, you can make something like a lamp timer the turns on when one time is passed, and then off when the second passes. 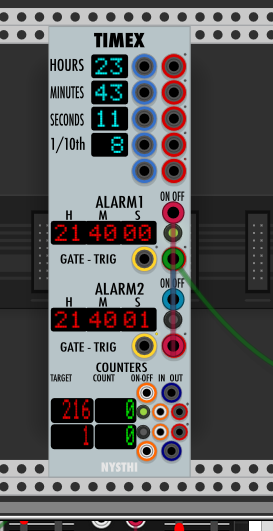 That’s a pretty good little hack. It’s not clear to me why Timex’s “alarm” turns itself off, but I guess it’s designed for something other than what I want it to do. The thing is, this use of Timex will output one trigger per wave period, but if I’m using it to time 24 hours of events I’m going to need a lot more triggers. I’ve found a more economical way to do it using a CV offset and the HetrickCV Comparator, which I can post later in case anybody wants to see it…

In other news, I’ve discovered that I can apply the same CV comparison technique to Frozen Wasteland’s Seriously Slow LFO. As near as I can tell, a 10v CV signal in Rack produces numbers five decimal places long, which means I can theoretically sequence 12 months of events at a resolution of 1/100,000 of a year, which is just about 5 minutes and 36 seconds. Time to think big

What precisely are you trying to accomplish? Hourly chimes? For time related things, I’d want to stay in the digital domain, and I’d likely just code a module for this. 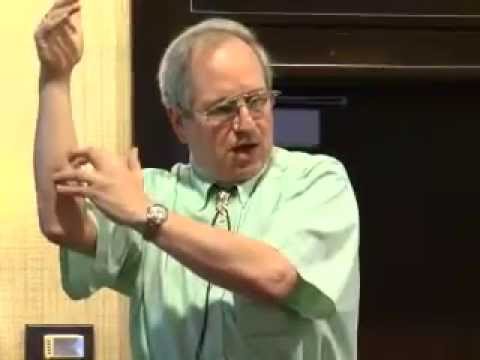 I’d like to sequence hourly chimes, daily cycles, changes in various parameters timed over the course of a day, or a week, or whatever, so that early morning in January sounds different from late afternoon in May, without me having to tell the software what time it is. I’d love to do this with a digital array of dates and times rather than doing weird things with CV, but I’m not a coder - should I move this discussion to the module ideas thread?

Turns out that scheduling daily/weekly/monthly/annual events is pretty easy, thanks to NYSTHI and Frozen Wasteland. Dr. Sussman and caowasteland’s advice is certainly sound, but I don’t code, so this is what I managed… 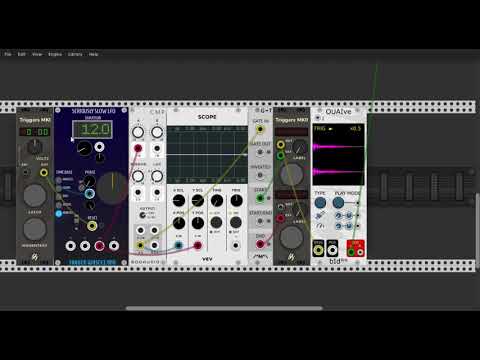