Found this cool paper on modeling a Roland Space Echo in software, which provides a block diagram (nothing earthshaking, but interesting.

The one thing I can’t find is an audio delay module that can handle low level modulation of delay time without breaking up. Any suggestions.

AS DelayPlus actually does pretty good with modulating delay time as long as it’s an instintaneous, significant jump. But I if I inject a low level modulation into the delay time, it breaks up and distorts.

did you try any of the nysthi delays: are all modulable

the stereo chorus is just using the same delay lines

What I really want is a version of the AS DelayPlus that wows and flutters with low level delay time modulation instead of breaking up and sounding harsh.

I guess my dream delay module would have these characteristics:

(for the tone control you need to use the send/retunr)

Can’t Chronoblob do most of what you are looking for? It can behave as much like a tape delay as any emulation I’ve tried (considering I’ve never used a real one). The delay can wow and flutter with time modulation, or not if you want. It has a send and return but I’ve not experimented a lot with it and it is mono when used in that setting.

I swear there is a NYSTHI module for literally everything.

I’d use chronoblob2. cf Buffer also does some interesting stuff but is not what you want at all (absolutely worth messing about with, though).

Thanks for all the modules ! there is always new things to discover ! Been loving jira jira lately, but always a pleasure to open a new one and patch random things until i understand what goes on

the red displays are DRAGGABLE displays,
they are positional, the more left the more faster is the change

the green display show the real value, after applying the CV in and CV IN VCAs

I just gotta figure out how to properly “work” the bias knob to get new material on the already saturated tape (with removed erase head) - controlled and in time. This can be somehow tricky. And the rep at distortion sounds just amazing too (there should be cv inputs for those too; but it’s okay now with MIDI/CV-MAP and the like).

Thanks for the suggestion. I have an example pitch using clockable delay here:
TapeEchoEmulation.vcv (34.0 KB)

This follows pretty closely the block diagram given in the Downing&Terjesen paper linked at the top.
The feedback loop – hooked to the feeback send-return of the ClockableDelay – has tube saturation followed by a Highpass & Lowpass filter (to emulate a wide bandpass filter). A filter follows the delay as suggested in the paper.

Then some subtle random delay time modulation from a SOU through an 8Vert. Anything beyond 1% on the 8vert tends to sound like more than subtle detuning.

And because I randomly modulate EVERYTHING, all 3 filters have random cutoff modulation, done by using S&H with a slew limiter. I could have used an SOU instead but didn’t.

I owned a Maestro echoplex and have the UAD plugin version and this sounds like a good start.

I’m curious how NYSTHI::Jira Jira Disk doesn’t fit the bill if you’re looking for the whole wow/flutter thing? I ask because it’s also modeled after magnetic media - the Binson Echorec’s disc vs the Maestro Echoplex’s tape.

(You do need a heavily attenuated signal on the CV input, on the order of maybe not even 10th’s of a volt, but it can work…)

yes, can work too 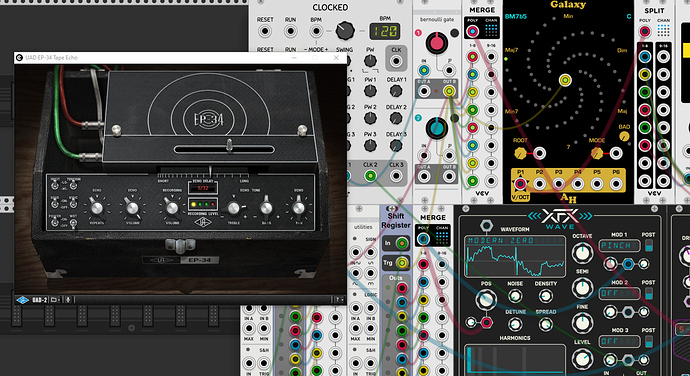