What should be my first DAW with Rack Pro?

Yeah, it’s fun. I’m routing VCV into Kontakt in Harrison for other instruments. Piano, drums currently. Drums were …fun to route, but got it together. Probably go back to Vult and others. I just wanted to see how it’d work all in all. It worked pretty good.

Nice! One instance to arrange all sequencers and CV with overlapping modules like clock, modulation etc. and then a few instances with only a TP and Midi-Module. That is a really good idea!!!

I’m working with Cubase all the time, and it never crashes. On the rare occasion I’ve had crashes, it was always a VST that caused it.

In fact, my workflow is: produce in VCV, mix in Cubase. And that works extremely well for me.

exactly. i hope that they will release a teleport version or clone with more ins and outs as this number will be the new bottleneck.

Is anyone having problems with bitwig and rack pro? I’ve reported it but it seems that no one else has mentioned it on this forum.

When I load a project with Rack vst in it the plugin doesn’t start, either get an error saying the plugin host died and could not read async reply, end of stream or it displays a spinning circle on the plugin generic interface and never loads.

OK yes - that will be down to a particular module - there’s a few modules causing that problem. Orangeline Fence and Dejavu for example. Maybe some Nysthi. To troubleshoot, remove modules from your patch one at a time to isolate which one is causing the problem. You can test quickly by deleting the VST and then undoing - you don’t need to quit and relaunch Bitwig each time.

I can’t access the patch though, the plugin won’t load?

I’m not sure if you can get that back or not. It’s best to always save the patches using file > save in the Rack VST as you go for backup (even though they are saved with your DAW project) . Then even if the plugin VST crashes on launch, you can delete the instance and add a fresh Rack VST with minimal template which doesn’t crash, then open your main patch from file > open in the Rack VST.

You can then do the testing to isolate the module causing the problem.

Ah ok, yeah I was wondering if it was because I hadn’t saved it inside Rack. I think I saved one of them as a patch so I’ll give that a try. Cheers Steve.

No problem please report back if you find the module(s) responsible. I think this same problem may effect modules from a few different developers so finding out what’s responsible is quite important - particularly as it can cause patches to be lost if not saved in Rack.

btw - what Platform are you on?

I’m fairly sure it’s NYSTHI, both patches I saved have some of those modules and I was also getting an error that Rack had crashed when restarting standalone even though it hadn’t actually crashed. I’ll have a look at his github and report it there if it hasn’t been already.

I m trying to handle the automation and it not work at all, nothing, dead (at least on windows)

Renoise working just fine on windows with the lasted update 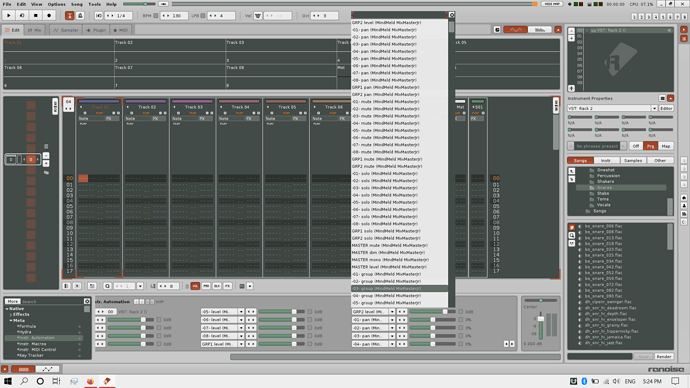 Having watched a couple of Omri’s videos about Rack-DAW integration, and tried the Rack VST in a couple of demo DAW’s, I’m getting the sense that maybe VST’s in DAW’s is not for me. My main issue is the horrible user experience of displaying and working with the VST window from inside the DAW.

I find this to be a horrible experience, much worse than Rack standalone, and I don’t understand how anyone could enjoy it. Is it just a case of “I’ve learned to live with it”?

If dragging a window to resize it is the price to pay for having Rack in the DAW with perfect sync etc - then no real complaints from me.

Do none of the DAW’s remember the size of a VST window when you last closed it?

Do none of them allow for maximizing the VST window?

I don’t think so - at least on Windows. I don’t recall ever seeing a maximize choice on any plugins I’ve seen

However, Rack VST can be taken to fullscreen with f11, which is very uncommon, and pretty neat…

I already own nearly 2000 plugins so something that lets me use those with VCV which doesn’t fall over a lot is well worth it. My memory of using VCV with the Bridge plugin is it was inefficient and flakey.

One reason I’m not jonesing for Chronoblob in v2 is I’ve got some great effects from Eventide, Soundtoys, Arturia etc I can use in its place.

Woah, never notice this before… I guess because most DAWs expect plugins to be well… “plugins”, not platforms. Common plugins used in DAWs don’t need to be resize or fullscreen (if devs get scaling and layout right or have been set by users), and some just cannot resize or scale (insert many companies here)

Prior to Rack I use Reaktor, and I never edit patches in DAW, instead I patch and design a interface in the standalone first, then load Reaktor in DAW and use it as a normal plugin instrument.
Maybe resize/fullscreen problem is one of the reasons why I don’t edit in the first place (others being opening a DAW is cumbersome and needing to save with DAW project).