Hi There, I’m a fairly new user to VCV rack so it’s possible there’s something I’m missing, but I’m having a hard time finding USB MIDI controllers that actually work with MIDI MAP. I’ve had luck with a Nocation Launchkey mini and 49, but everything else I’ve tried it seems like half of the knobs, or in some cases all of them, simply don’t get read by the module. The Mini doesn’t have as much control as I’d like and the 49 is a bit large for the way I want to use the program, so i’ve tried a few others but haven’t had much luck. So far I’ve tried a Behringer BCF2000, the knobs worked but the faders didn’t, an Arturia Keylab mini, MIDI MAP actually read the knobs but the CC value kept snapping back to the center when I wasn’t touching them, and a Worlde Easycontrol 9, which shows up in MIDI MAP as a control source, but then the module won’t read any of the controls. Am I missing something here or is the module just really finicky?

I’ve had no trouble at all mapping midi controls with a Korg NanoKontrol2. Helps to have a reference to which CC each knob/fader/button sends.

The easycontrol software maps that out for me so I do know which CC each control is, in what way does it help?

I use a Behringer BCR2000 without problems, I just did program the knobs as I wanted with some CCs and assigned them in Midi-map.

Maybe your setup is a bit tricky, how did you set up the faders of the BCF2000? the Keylab should work too.

can you describe your setup a bit more?

maybe this vid helps you: 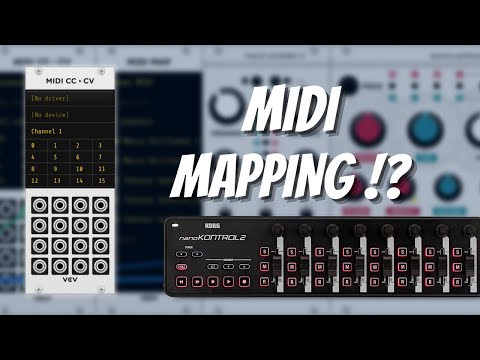 work without issues to me Korg Nanokontrol2, Keystation midi 32, Polyend Tracker, touchOSC and even sending and receiving MIDI fron other software (renoise , reaper) on windows and Linux

I think , most of the controllers in the market , maybe can help if you use a MIDI monitor to see what happening with your MIDI messages , try Protokol it help me a lot to test an Arduino controller of a friend

pass this and use stoermelder midi-cat instead, mainly due to proper feedback and other cool features