Wasapi doesn’t let me to have more than 2 outs 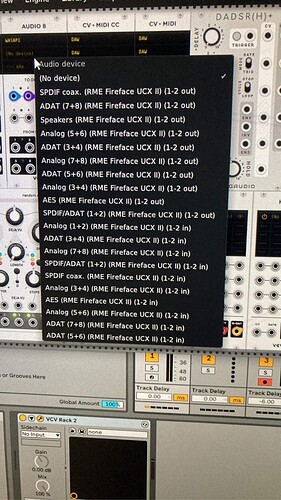 I need a bit of help if someone can help me out. So I have just purchased RME UCX II audio card and would like to use all 6 of its outputs ( all 6 of them are dc coupled ) but im not sure how to do that as I can only use 1-2 channels on each of those suggested outs.

Iam using vcv pro in ableton. If someone might have any idea how to do that using wasapi would be great of helping me out

I have no idea, but I may as well ask you what others would… why not use ASIO?

Yeah id love to but seems like u cant choose asio in DAW, or in vcv rack pro… im using it inside ableton so have only daw, wasapi and direct sound

Ok, so why not choose DAW?

I have a similar interface, an RME Digiface, and I can get 16 audio channels in and 16 out using DAW via an Audio-16 module

So wait u can go even if its choosen daw, u can go from that into modular?

If it works like my Expert Sleepers stuff (which I use on the modular) you use a track to pick up the output of say, Rack output 3 and send it to Audio output 3 (if that’s one of your DC coupled ones) and that should work fine.

Ok this works , brilliant stuff thanks a million for this

No worries, I use a hybrid VCV/modular set up too and it’s a lot of fun.

Hey man, just as U here mentioned … how do you have your expert sleepers connected with rme? Have u got it with adat?

yes, the Digiface interface I have is a tiny box with 4 sets of 8 channel ADAT audio in and 4 sets out. I have three micpre boxes for hardware synth audio and one ADAT into a ES-3 for output to the modular and another into a ES-6 for input of modular audio or cv into the DAW. Inside the DAW they just appear as standard audio in and out ports.

I have connected adat out into es8 adat in but nothing is coming out… should I do something jn total mjx?

ES-8 is a different thing. Unfortunately it’s an interface in its own right so I don’t think you can do that as simply as I do. Maybe I’m wrong and there is a way to do it, but I think it’s the usual PC issue of trying to run two interfaces using ASIO. There’s a way to do it with ASIO4ALL, but I hated that as it was crashy with high latency.

When Windows 11 was announced I hoped we’d get a decent aggregate audio interface like Mac, but nope, digital audio is the red headed stepchild of Windows.

Yeah there should, I can run es8 as standalone, or not as interface but with adat, but cant see how to work this on… i dont have to do nothing with total mix to enable adat or something? U just hooked your one and it worked?

I had to set something in the RME driver settings, but not TotalMix IIRC, can’t really remember as only did it once.

The only caveat is making sure the audio rate works with the device, I run everything at 24-bit 48kHz and that seems fine.

Just googled the ES-8 as ADAT mode and yes I don’t see why it wouldn’t work. Make sure you have your ADAT/SPDIF lead inputs and outputs matched, do you see ADAT sync lights on the UCX (or however it shows on there)?

Hey yeah I have adat out of rme into adat in if es8… I have the red light coming out if cable so thats it, going into input with no red light into es8… dont know, am I doing something wrong?

Sounds right, but I guess try sticking some square wave VCO or something from your modular out and look in total mix to see if it’s showing up on a channel there? Then the other way try outputting a signal to the ADAT out and see if it’s visible.

One other thing - maybe in your UCX driver settings do you need to set the UCX ADAT as Master? Make sure it’s in ADAT mode rather than SPDIF?

Without a USB connection, the ES-8 operates in ‘standalone’ mode. In this mode

Since the ES-8 only has four analogue inputs, the last four ADAT output channels will be silent.

The ES-8 will sync to the incoming ADAT clock, if any. With no ADAT input, it will use its internal clock, in which case anything using the ES-8’s ADAT output will need to sync to the ADAT clock.

The ADAT protocol intrinsically only supports operation at 44.1 or 48kHz. Most audio interfaces that run at double sample rates (88.1/96kHz) use two ADAT ports and a variant of ADAT known as ‘SMUX’ to support this.

The ES-8 takes a different approach. At 88.1/96kHz, every other audio sample on the ADAT outputs is thrown away, reducing the signal to 44.1/48khz. Thus, the full channel count on an attached ES-3 (for example) is maintained even at 96kHz. Similarly, every audio sample arriving on the ADAT input is doubled up.

This basic sample rate conversation is likely to be fine if the signals are CVs. For audio, you might want to consider adding some filtering into the signal chain to avoid aliasing.

Note that the above only applies if the ES-8 is running at 88.1 or 96kHz. At 44.1/48kHz, everything is running at its natural rate, nothing is thrown away or fabricated, and there are no odd aliasing concerns.

Also, for the avoidance of doubt, if the ES-8 is running at 88.1/96kHz then its own analogue inputs and outputs are running at that rate.

Hey man can I ask you… if I do the cv out of vcv into daw theough audio module - Daw… i get to hear this clicking affects channel in total mix, U probably encountered this as well… have do u mute this or whatewvr u do with it? If there is a way…

Not had that happen personally. Shouldn’t affect anything else as all the audio channels are discrete.

Only guess I have is that you are making use of a feature I don’t have in Total Mix like a shared FX bus (my Digiface doesn’t offer DSP). Check that the track you use for CV isn’t sending part of it’s signal to something like a reverb or limiter bus.