Vult Modules Caudal: it's a matter of SPEED

Hello Rackheadz!
I have been playing with the amazing Caudal for a while… It’s glorious!

There’s only one thing that I really really miss: a speed control for every “segment”.

UNLESS, of course, I am missing something that I haven’t noticed. It happened in the past that I’ve missed a function of some plugins so it could well be.

Tee hee!! @modlfo, a good name could be: CAUDAL 4 ENGINES!

But seriously… The more I use Caudal, the more I crave for separated speed controls! Damn, am I the only one??? 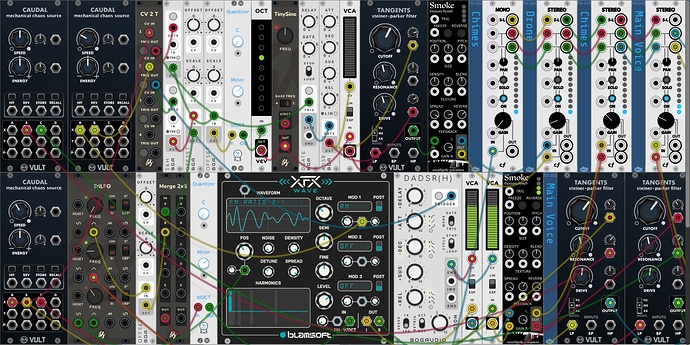 Tee hee!! @modlfo, a good name could be: CAUDAL 4 ENGINES!

But seriously… The more I use Caudal, the more I crave for separated speed controls! Damn, am I the only one???

you are not alone! I would also like a Clock input. Although this can be done with a S+H perhaps

I was seriously considering to use more than 1 Caudal but I am going to circumvent this in a way or in another. Maybe with some attenuverter and some multiplier?
I have to experiment…

Initially Caudal was gonna allow to control more parameters, like friction, mass, gravity, etc. After using the prototype of Caudal I found a few issues that were not very good.

These problems arise because Caudal is an accurate physical simulation.

What ended up doing is, based on the equations, I defined the “Energy” parameter that affects the mass, length and gravity at the same time. For the friction, Caudal has a smart control that changes the friction in order to keep the pendula moving at approximately the set speed. That way the pendula never stops or goes out of control.

I have in mind a new version of Caudal, but rather than changing the core pendula is gonna add more features on the signa conditioning side.

I understand, so thank you for this explanation.

I have two solutions then:
One is to use more than one module

The other one is to get one signal, multiply it and use attenuators to reduce it at my discrection.

I am experimenting with it and I am getting some nice effects!

Check this video I just posted regarding Caudal. The resulting signals are quite nice and they practically increase the frequency of the original signals.

Get that microphone fixed ! I love your verbal tutorials

To slow down the signal a bit, you can use the Leakage module. Just turn the Rate knob in the follower section. Switching follower modes (and using clock signal) gives different results. 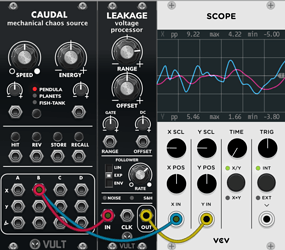 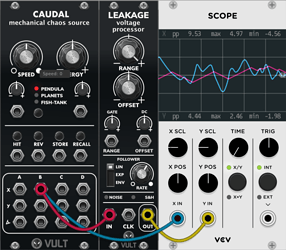