Hello everyone, I have been talking to Squinky Labs about his development of the Voyetra 8 Rack mounted synth and all the wonderful team who developed the hardware and software [Our very own Squinky]. I have as usual dived in to trying to recreate the ‘audio path’ of the synth. I feel like I have hijacked the ‘What are you listening to’ thread, so I have started this one for discussion about making the synth in VCV Rack. All are welcome as always to contribute to this endeavour. Here are the audio chain schematics of the Voyetra 8 from the user manual: 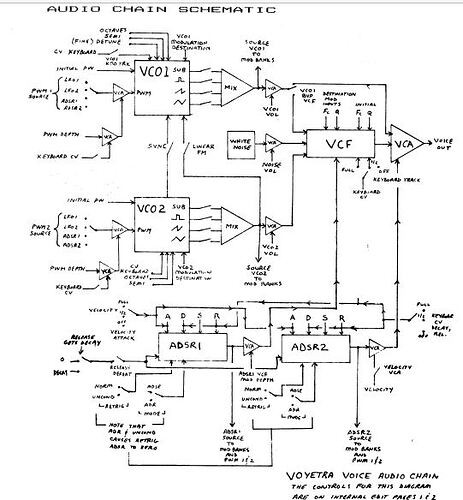 This is probably miles off but here it is Kleine Voyetra 8 style synth.

yep, that voice diagram is pretty accurate. I suspect it was drawn by the creator.

In the other thread you speculated about which modules would be similar. For the filter, it was an SSM-2044, which was not used by many synths of the time. It was cheap, simple, and sounded the most like a mini moog to us. I’d maybe try Alma, since people here say that’s the most “moogy” VCF. The VCO was a Curtiss 3340, which was quite popular. I think “eveyone” used it, since it did require the infmous tempco “q 81” that was a pain. That chip has been re-issued, and I see that Eric sells an analog module that uses it. So I guess any “analog sounding” VCO might do?

It was fairly subtle, but the linear FM was unusual and will be hard to repro. I don’t know of any VCOs in VCV that have all the “analog” waveforms, linear FM and a sub-octave. I’ll bet there is one.

The way one of the VCOs can bypass the filter is also a pain to patch up, buy honestly it didn’t sound that great.

As I mentioned before, I strongly suspect that attack portion of the ADSR is “unusual”, like it might be upside down. But my memory could be bad on this. Just trying to remember what an incompetent noob would have done implementing a 16 bit ADSR on a slow 8 bit cpu that couldn’t multiply…

any VCOs in VCV that have all the “analog” waveforms, linear FM and a sub-octave. I’ll bet there is one.

This sounds a bit like one of the Instruo oscillator, they have a sub and the different waveforms-C-SL or Troika, but maybe not the sub-octave unless that is the same as a ‘sub’? Thanks for all your time. I will try the Alma filter, was the original 24db sure I read that on the other thread. On my Kleine VCV version I used your EV3 oscillator would that have worked for the original Voyetra 8?

Yeah, sub usually means a sub-octave. That sounds like a good bet.

I would use two TSLs, they have all you need for the VCOs and the PWM-modulated square on the CSL is a different shape than on the first one. I love the traigh as VCF and it has three inputs as well. What I find with the Instruo Modules is that they really begin to shine, when you set your engine sample rate to 2x the audio sample rate. But they are not polyphonic. So you could multiply all modules by 8 (I don’t know if that will work, performance-wise) or use a polyphonic VCO and VCF, maybe a Core VCO-1 with a flipflop as Sub? But I don’t know if the VCO-1 has linear or exponential FM.

A slight diversion for my obsession: using a plain flip-flop to generate a sub octave will give a ton of aliasing - as much as if you made a square wave VCO with no thought to aliasing. Now, if you use it only for low pitches you can probably get away with it.

Also, every VCO I’ve tested that had a sub had no alias mitigation on the sub output, even when the other outputs are nice and clean. Although I’m sure there are some exemplary ones out there.

Of course the Voyetra-8 used a CMOS flip-flop to generate its subs, but being in the analog domain there was no unwanted distortion in there.

Hello again, so the VCOs and possibly the Filter are settled, there are a few good choices for those. What about the arpeggiator, I have tried the Arp700 by MscHack, that works fine for me, any other recommendations, also what about the modulation circuit, is that even possible in Rack, there are matrix mixer, would they do? However, what would you put into that LFOs, what else? Thanks for your time.

the arpeggiator was very basic, so I would expect that anything would work. iirc they could do up/down/up and down and switch octave (like one up and one down or something?). The LFOs were super basic.

There were four modulation channels, each one could take any input (lfo, adsr, vco output), multiply it by any controller (pressure, joystick x, joystick Y and none?) and output it to any destination (vco1 or 2 pitch, pulse width, filter cutoff, filter resonance. Again, I would think there are VCV mixers that are good for that, but I’m not sure.

Thanks, it does sound like a job for a matrix mixer, Bogaudio and Strums Mental Patch Matrix do good buttons and knob versions. They go up to 8 ins and outs, or even more but that would be bonkers!! The patch is gonna be enormous maybe even bigger than the metal box the original came in! Carmine sure did a good job sticking such a great amount of options into a small metal box!

Sorry more questions, how would I go about modulating pulse width in a Voyetra style patch, any module ideas? I have put a Strum Patch matrix into the patch and got some good pitch shifting using their Pitch shifter. So I might up load it to Patchstorage and see if it can be improved. Would you care to have a look at the patch beforehand? Thanks for your time, much appreciated.

Hey Squinky Labs! I looked at the specs for the Curtis 3340 chip and it looks like you can get 4 voices out of it (ramp, Tri, PW and sub/square wave). Do you remember if you could get all 4 voices at the same time and mix them together as one monophonic voice?

Yes, you certainly can!

my memory is a little foggy. the 3340 is at its core a triangle wave VCO. I don’t remember how many different waveforms would come out of it without a lot of external circuitry. But I’m pretty sure tri, saw, and pulse were pretty much free, and we used half of a dual flip flop to make a sub.