VCVRack on VirtualBox with Windows guest on ubuntu host

hi, for testing some stuff if have set up the 90 day microsoft VM (windows 11) in virtualbox on a ubuntu host. works, but with a small glitch: 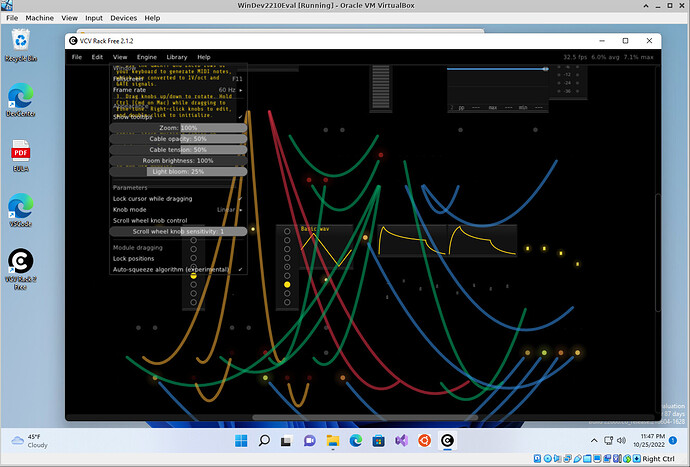 so there seems still to be a problem with open gl. However something is drawn on the screen … anyone with an idea? thanks.

I never had great success virtualizing graphics intensive apps, however:

VMSVGA and 3D acceleration is not possible. only VboxSVGA + 3D

Guest additions are installed and RAM is 256MB.

Trying out other drivers or 3D config result in VCVRack not running at all.

So the interesting point is that it runs …

I use OpenGL in VMs quite often, the trick is to resort to software rendering rather than hardware rendering (which ends up being subpar as you have experienced).

On Linux with mesa it is quite easy, just an env var. On Windows I can recommend Mesa3D For Windows - Federico Dossena which has worked for me without flaw. Just place the dll on the same dir where the application executable is, and you get proper OpenGL support! Obviously through CPU, so it runs slow, but on a VM who cares anyway.

I tried to run VCV under Wine and performance was great, one more option instead of VM for running binaries at least.

cool, but i’m not sure if this i sufficient for testing.