While using VCV Rack 2 Pro, using the Audio 2 modules. 16 outs, or 8 stereo outs are available which is nice. But is there a way to expand the number that is available? Even to 32 if I could or more?

This is usable in a sense that is similar to Skrylar JACK plugins but not as nice. We need more outs, especially for use with multi-out configuration. Skrylar JACK plugins were good in this sense because I could expand on more as needed. It gave me way better control on sane mixing correlation if I were to use one instrument per track. Percussion could easily take up 16 outs mixing this way.

With Skrylar JACK, naming conventions were also available which translated into the DAW really well. The name or rather renamed channels in Rack could be seen in the DAW. For ease of designation.

Even if the plugin only had expandable I/O sinks without any other JACK features, the workflow and ability to mix and have that overhead of channels was superior. Enabling as many channels as needed on a per instrument basis.

I hope there’s a renewed interest in the development community to make similar plugins. Whether it’s just having those I/O sinks, or expanding on similar ideals that Skrylar JACK plugins had. Or have even more support for JACK.

But is there a way to expand the number that is available? 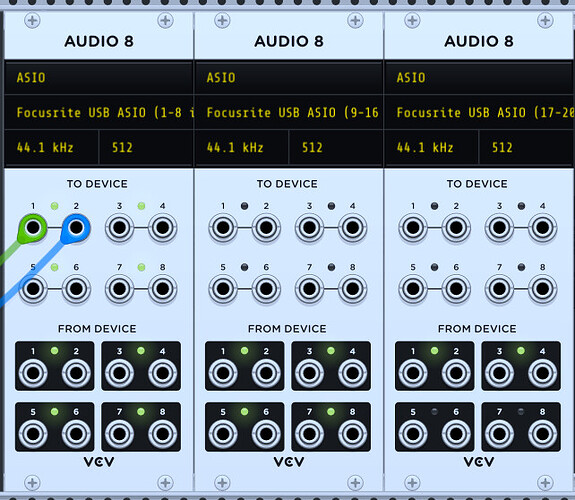 Trying both VST and Rack itself, I can’t get more than 16 I/O. 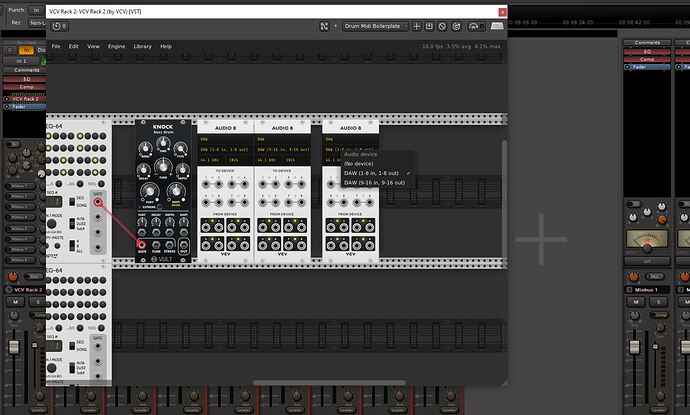 In Rack Standalone you have as many channels as your interface offers.

In Rack VST it is currently limited to 16 as that is what the DAW driver has as a limit and you can’t currently access other drivers from the VST.

I’ve been told that should change soon and access to other audio drivers will be made available in the VST in an update once that feature has been tested for stability.

I don’t think there are currently any plans to increase the DAW driver channel number from 16 though - although you can of course run multiple instances of the VST and have 16 channels of the DAW driver per instance.

Access to other midi drivers is also coming to the VST at the same time.

Is there a public document that lists these coming features?

Not that I’m aware of, I was told this in an email. Another user also asked Andrew about access to other audio drivers and was told they were coming and was also told he could make Andrew’s answer available to others.

Ah, ok. It’s a pretty unconventional way to get product enhancement announcements out to customers, but so be it. thanks.

Ideally, I’d love to not have to rely on a constant in the program(driver support), but allow the computer determine how many I can use. I never really had to worry about audio sinks in that way until either Rack or my DAW started getting weird. Ideally, that never happened to me at all.

It just worked without any pertinent issue the way I used it with Skrylar modules. It was modular in a sense that I could just keep adding, renaming and using those JACK I/O sinks as I pleased without hassle.

In Rack 1, the Audio modules gave a bit of trouble to where changing the driver, made Rack segment fault. I’ve yet to have issues with that type of implosion yet in Rack 2.

It’s a pretty unconventional way to get product enhancement announcements out to customers, but so be it. thanks.

It wasn’t a product announcement, it was simply an answer to a question. And when asked if it was OK to tell others that answer, he said no problem.

oh, I didn’t mean to criticize you. but now everyone has been told “the product will do this”, so it is (to me) a “product announcement”. Not a big deal, and I should not have commented about it.