The VCV Flanger, Chorus, and Phaser are polyphonic.

But that doesn’t really explain what the polyphonic possibilities are.

As an example, the Flanger manual page say “The V/OCT input is calibrated to track pitch at 1V/octave, and the decay of the sound can be adjusted with the feedback fader.” But the V/Octave input is monophonic.

So what the Manual DOESN’T say

It would be good to know these things, and in a perfect world they would be part of the documentation.

But the V/Octave input is monophonic.

All modules with the Polyphonic tag should be fully polyphonic. This means that the module can process up to 16 independent voices controlled by polyphonic inputs. Monophonic inputs are applied to all voices.

If not, it is a bug. However, I double-checked VCV Flanger and it appears to be fine.

Monophonic inputs are applied to all voices.

If not, it is a bug. However, I double-checked VCV Flanger and it appears to be fine.

Are you sure!? The behavior you describe is more or less what I expect based on other VCV modules. But that is not the behavior I am seeing. I did my tests on a Windows 10 machine.

What Andrew describes is what he considers the “standard” implementation of polyphony. I have not heard anyone strongly disagree with that “standard”, and it’s pretty common:

Not all modules follow this model, but most do, and if they don’t they really should document their behavior. I know on Mind Meld mixers and my comp II the knobs control a singled “selected” channel. Or in Vult module I think if you have a n channel mod source in an m channel module, and n < m they cycles around.

Lacking documentation to the contrary, and ignoring possible bugs, I think it’s reasonable to assume the above.

afaik all polyphonic VCV modules work this way, and most are polyphonic.

That is exactly what I tried to describe, but is not what I am observing. Monophonic modulations is only being applied to the 1st channel of a polyphonic voice. I expect it to be applied to all channels.

I have spent considerable time exploring in depth the precise behaviors of a number of VCV modules where the documentation is missing or incomplete. And I have shared my own documentation of what I have found. I think I have a pretty good handle on what to expect - there are only a few variations of polyphony design within the Fundamental collection.

But all three of the new modules - Chorus, Phaser, and Flanger - behave in an entirely different way from other polyphonic VCV modules. I suspect this is a bug, especially given that it does not match what Andrew described in his post.

oh, for sure, I get that there may be / is something wrong. And it’s great to track it down and get if fixed. nice one!

Specifically I tried sending polyphonic V/Oct to Flanger & a polyphonic trigger pulse to the inputs. The idea being to ping the Flanger polyphonically. That seemed to sound like it was only producing one note on the output. I’ll try it again tomorrow & I’ll log a bug with a patch if it seems to only play one note still.

Oh. I think I understand the utility of VCV Library - Sparkette's Stuff Polyphonic Repeater now, versus a simple Multi.

It is a bit annoying to see the tag “Polyphonic” applied to a module that does not have polyphonic outputs, only polyphonic inputs, like VCV Library - Valley Plateau reverb.

UPDATE: I verified that the V/Oct input is properly polyphonic. You were right, @Vortico I was wrong.

This doesn’t sound great. But it works.

Never-the-less, your inquiry led to the discovery of an unrelated polyphony bug that was quickly fixed. So I think it was worth it in the end.

“Oh. I think I understand the utility of VCV Library - Sparkette’s Stuff Polyphonic Repeater now, versus a simple Multi.”

Yep, I use this to make a monophonic guitar signal into a 16 channels for poly effects processing. There is also a Bogaudio module with the same functionality. Thanks @Vortico for making these polyphonic, I think it’s a really interesting concept for sound design. The way I see it is running multiple modules without having to individually patch them all. Imagine trying to use 16 flanger stomp boxes all at once, and being able to control multiple parameters too! Almost impossible. I didn’t notice the bug because I’ve only tried poly modulation sources.

I think that’s just how it sounds using a delay line to generated pitched tones. Hora’s Millenial can also do this (although it seems to be broken at the moment) and sounds much harsher, so the VCV one is actually pretty good. I did a patch using this and wasn’t entrirely happy with the sound, but having spent ages tweaking it I uploaded a quick jam anyway. Not my best work to be honest, but it’s got potential for sound design! For more standard flanger sounds, it’s a great option to have. 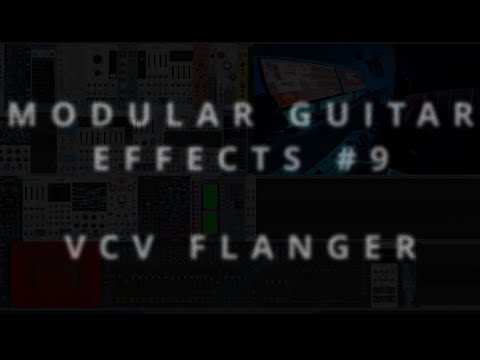