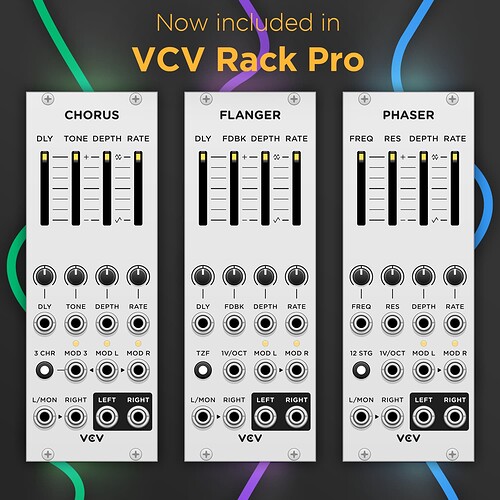 Thank you! Looking forward to playing with these…

Merry Christmas to everyone!

Thanks for this, also like the included manual and documentation. Looks very nice!

These are great! Thanks for including external modulation inputs so we can use really slow or random modulation. The flanger in particular can get really glitchy using sample and hold, one of my favourite effects.

Holy crap, they’re polyphonic too! This is amazing.

But is it just me or is this a shift in the pricing paradigm? With Pro being the VCV for DAWs so I’m kinda looking at a module pack for 149,-?

Yep, true but I wasn’t sure that would extend to effects. I’ve wanted a poly phaser for a while and already had Pro, so I’m a very happy camper!

Not really, you’re paying for the VST capability, and the effects modules are an added bonus. I guess it increases the perceived value of the Pro option for new customers? For someone who already bought it, it’s a very welcome addition.

When Pro came out there was some initial discussion of its possibilities as the ultimate multieffect for DAW users that weren’t necessarily starting from a modular way of thinking. It makes sense to me that the first Pro-specific plugins are official VCV implementations of bread-and-butter effects (which can be built from free primitives in Rack without a lot of trouble). DAW users get a no-fuss, endlessly customizable modulation set included; free users can pick from a bunch of existing options or roll their own.

The curveball would be if VCV released, say, a version of the XAOC Leibniz Binary Subsystem that came with Pro. Totally up to Andrew, but my guess is that releases which are more explicitly “modular” (for lack of a better description) are either going to be part of Fundamental (e.g. Compare/Gates/Logic/Process) or independent add-ons. Wouldn’t surprise me if we saw a Pro-specific conventional reverb, dynamics suite, etc. at some point down the line.

Definitely not, though most are.

I very much wish Random was polyphonic.

i can’t tell from context whether this conversation is only about VCV branded modules but, if not, there is a polyphonic delay: Stocaudio PolyDelay.

Yes, there are a few (not VCV) polyphonic delays available. There are several polyphonic random sample and hold modules as well.

But sometimes I like to restrict myself to VCV modules

Also, there is something very unique about the fundamental delay that I love, it could be the built in filter, I don’t know. But a fundamental polyphonic delay would be great. 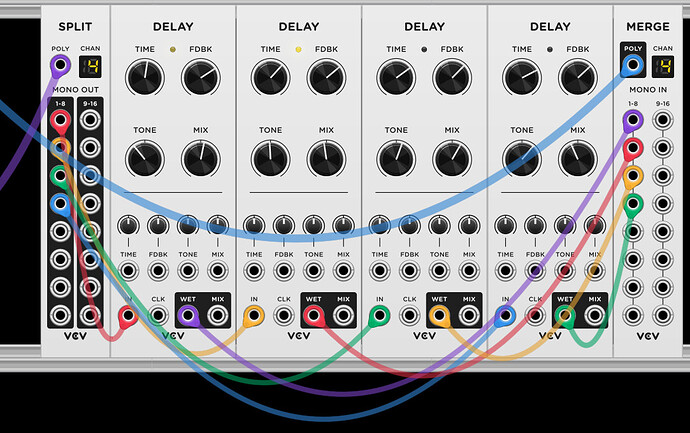 I get that, but I can’t be the only VCV user for whom this software is an instrument, first and foremost. Who are not necessarily interested in producing music via clicks on a timeline, as you do in a DAW, but playing it, in the moment. Using it. After all, it’s an emulation of Eurorack hardware. That’s why I’m into this, that’s why my ratio of VCV vs. Ableton is about 99.91:0.09. That’s why, for the time being, I just don’t feel a desire or need to buy the Pro version. So, to me, this “you can’t have these, unless you forego the reason you love this software” seems … weird. Misplaced.