Using a font vs. drawing little squares as pixels

Has anyone tried out drawing little squares as pixels for displaying text on a widget that resembles a computer screen (like the one in NerdSEQ)? 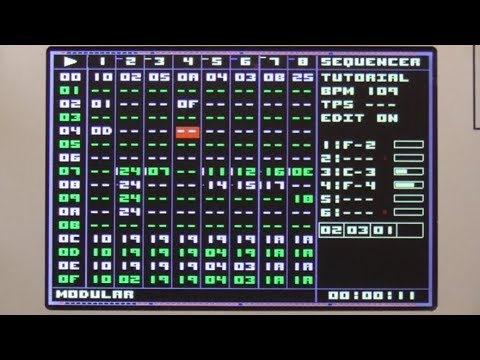 The Aria Salvatrice LCD widget might interest you. It doesn’t draw pixels manually, but it does use SVG files for text characters rather than rendering text with font directly via NanoVG. Those SVG files are made using Fixed_v01 font by Orgdot along with custom edits. The code is available under the WTFPL.

I’m not sure what benefit a custom text rendering engine (like I think you’re describing) would get you. I think it would be better to find a font that matches the look you’re going for. Personally, I’ve been using Terminal Grotesque for something like this sort of look.

Thank you for that tip.

I already have a text rendering engine that works by setting pixels, and I would like to reuse that code in VCV modules.

Oh, cool! I’m curious to see it in action.

In case you aren’t familiar with it, NanoVG also comes with functions for rendering bitmaps: nvgCreateImage(), nvgImagePattern, and some other related functions. You might find this useful for integrating your rendering engine.

Rendering a font probably means OpenGL needs to draw a handful of spline paths? Drawing with pix means drawing a few dozen little rectangles? Don’t know which is faster on most GPU, they probably they might not be that different? Unless nano has a very high cpu cost per objects, then drawing pix might be slow? Btw, I have read here that the aria modules sow down the module browser on some systems.