I’ve just started trying out Ubuntu Studio vs Windows for VCV Rack. I’ve got it on a dual boot on the same laptop so can compare on the same hardware.

Initial impression is that Rack starts very much faster on Ubuntu, and the graphic module browser is also hugely faster. It’s pretty sluggish on Windows.

I don’t know about the audio performance yet, seems fine so far.

I just can say the same. After I changed my OS base to Ubuntu Studio 20.10 a couple of weeks ago (after MS quality updates killed my Windows 10 Pro system disk twice … enough is enough), I had the experience that VCV Rack starts and runs faster as before. The audio (Intel HDA on the Smackover board) performance works fine on my old machine (I7, 16GB Ram, 2 SSD and 2 HDD), I’m in the middle of the configuration … so actually I cannot say more about.

Do you use the same audio buffer size on both systems?

Probably not, I tuned the Jack settings for latency. I’m currently using the laptop internal sound card rather than an external USB interface, as the purpose of this move is to make a complete ‘all-in-one instrument’ to take out with little kit as possible.

Here’s my current settings with that. With an external interface I can reduce the latency further, but this is OK.

Rack worked fine with it’s default settings. But I’ve reduced the same rate and the frame refresh rate to save some resources. 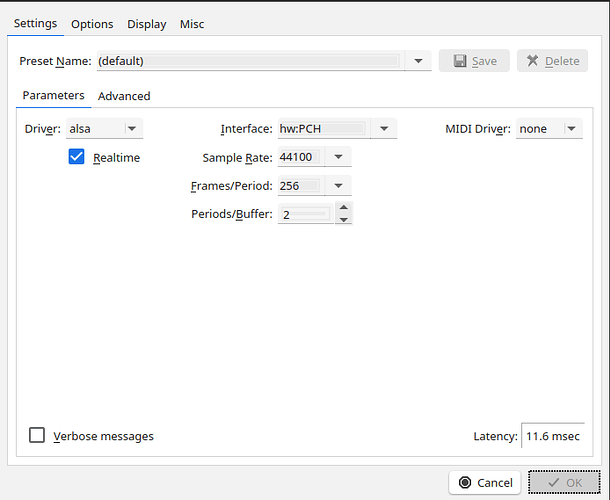 In my experience, most programs are faster on Linux all other things being equal. When it comes to audio, Ubuntu Studio properly configured is almost certainly going to be faster. For me, being comfortable with Linux, the only reason to use Windows is compatibility. If I can make it work on Linux, I’m going to use it in Linux.

to improve your setup

In the case of USB, JACK works best if the software latency is a multiple of 1ms

Even though I mainly use Windows at home, and am not a huge fan of Linux, I will admit that windows is particularly sluggish for anything having to do with disk access. I think it’s possible to do high performance disk I/O in windows, but it takes a lot of work. By default windows disk access seems to always go into some giant ram cache, and is just slow.

After many years of experience with all three systems I would say that all else being equal (which it rarely is) Windows is always all around slower than Linux and MacOS.

Most people tend to forget that they (probably/hopefully) have an anti-virus program running at all times in Windows. That alone will kill fast load times for programs, sometimes a little, sometimes grotesquely. As an exercise you can try and add the Documents/Rack/plugins-v1 directory to your exception list in the anti-virus program, so it won’t scan the plugins on load, that could have a significant positive effect.

There’s also a lot of experience involved in taking a randomly purchased Windows machine, with all its crapware, and turning it from “almost intolerable” into “it works Ok”. Windows is the dominant legacy OS at this point. You’re forced to use it (mostly) if you’re a gamer, or if you can’t be bothered to learn something new/other than what you’re used to at the office. If you’re a blank slate then definately look towards MacOS (the easy route) or Linux (the harder route, more work involved).

Thanks for these comments and advice. I had a lot of experience of Linux in the early days, not so much recently. And none on Linux audio. I’ve never got into MacOS because of the hefty price, and I can’t see that view changing!!!

I’d always seen Linux as great as a server, but as a desktop a bit awkward. You had to want to do it

This Ubuntu Studio uses xfce which is simple and snappy so I’m revising that opinion. That said, the desktop experience is a side issue for me - I know it’s super important to a lot of people. Just a nice surprise. That Rack loads very quickly is also a nice surprise.

Right now the motive is the more flexibile and controllable linux audio and midi - and Studio seems to be doing the job. Getting multiple audio apps to co-exist nicely.

i have an ideapad u430 touch (ssd and 8gb ram): in my experience i can reach the limitations of my system a lot faster on win10 than on ubuntustudio 20.10. ubuntu feels faster and i can run “heavy” patches on it, reducing frame rate helps a little, especially if i use vcvrecorder. cheers for all the suggestions in this post - very helpful

to improve your setup

@David thank you for this. This seems to be in line with the features they’ve put into Ubuntu Studio - so that’s pleasing.

Sounds good. If you’ve had a smooth/easy setup of Jack on Linux that just works you should feel lucky, by all accounts

There’s no question that the Linux desktop has gotten very far over the years. I also think there’s still no question, that if you want to build a Linux system, that works well with all your hardware, you’re in for quite a bit of work/research … or you need to just get lucky

Lucky - I know what you mean! In the old days there was always a bit of “will it/won’t it?” I remember but that was with graphics modes. Aaagh I’m having a flashback.

This may be famous last words, but having had success with Jack on the Raspberry PIs and now two very different laptops, I feel that the universe isn’t so chaotic. Jack seems to work logically and repeatably - and that’s something to grab hold of

I had a bit of a wobble trying to use Ardour DAW for the first time, but that turned out to be PEBCAK, so all good now.

I would run my studio machines – master for Reaper and slave for VCV Rack or other processing – on Linux if my audio interfaces had drivers for it. Alas, I am stuck with Windows.