Turning a NanoKontrol2 into an uber midi controller

Heyo, I’ve got about 10 hours in VCV rack and still figuring stuff out so maybe there’s a module that already does this, but as a bit of a challenge I tried to make a midi CC bank, to allow me to control a 16 channel mixer with the 8 faders of a nanoKontrol2

I knew it had to be possible using some logic gates but took a while to actually figure it out, so I wanted to share with you all as it’s entirely possible to do it using just a few of the amazing modules available in VCV rack!

Hardware required: Any midi controller that spits out CC and has at least 1 button.

Steps to reproduce on a NanoKontrol:

Try moving the faders on the controller to see which ones light up, then press the button to swap to the next “bank” and move the faders. Your previous setting should be “saved” and the next fader setting should kick in. In theory this could be mapped to infinite “banks” of CC. You could control effectively an entire rig with just 8 faders and a button!

Right now the fader will simply “snap” to whatever it’s currently sitting at whenever you swap banks. I’m going to work on a smooth transition using a low pass filter to slow down the rate of change, it should also be possible to implement a “latch”.

Here’s a screenshot of what it should look like 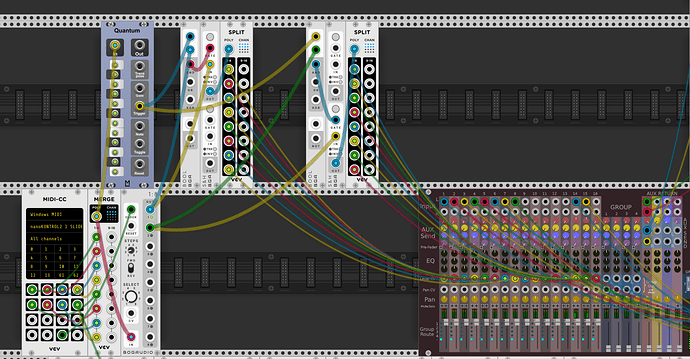 If there’s interest in this kind of thing I might just create a midi module using the plugin API as it would probably be a lot easier to follow!

Hope this helps someone Cheers!

I think it has not been ported to v1 but maybe something like this?

VCV Modules. Contribute to apbianco/SerialRacker development by creating an account on GitHub.

Nice! Thanks. Dont feel like I entirely wasted my time because I’m still learning but having a single module would be so much easier!

Hi, JPM! I am quite new to VCV rack and my background is just the one of a musician, no programming, midi knowledge or modular synth technicques (I’m also new to those…) I have a Nanokontrol2 and have been struggling to make it work with VCV, to no avail whatsoever. I followed thoroughly your instructions an copied the patch of the pic exactly… but nothing happens! I am using version 1.6.6 of VCV Rack… I wonder if the patch you described applies to the said version. If not… do you have another option to controlling VCV with Nanokontrol2? Any input will be heartly appreciated! Thank you and stay cool!

Make sure the midi cc module has nanokontrol selected! I’m not sure tbh!

I did, but still no cigar! thank you anyway!!