I was active some years ago in the free VST world under the “Tonecarver” moniker. I took a long absence from coding VSTs but got the bug again after spending some time in VCV Rack. So, here is an early look at my first module… “Blur”. It is a spectral manipulation module based on the 2008 paper by Jean-Francois Charles published in Computer Music Journal 32.

The module produces a sequence of FFT frames for the incoming audio and stores the frames in a history buffer sized for up to 10 seconds worth of frames. Output is constructed by selecting a ‘cursor’ position within the history of frames, then for each bin, selecting a random nearby frame within a specified range and interpolating the bin values between that nearby frame and its neighbor to produce the ‘blur’.

Output can be produced at any rate (time stretched, time compresses) and direction (forward, reverse, jittery) by modulating the cursor position parameter.

Blur params control the amount of blur and the frequency range where the blur is applied.

And, I still fail badly on UI design, so there is a good chance I will be looking for a UI designer to collaborate with at some point. 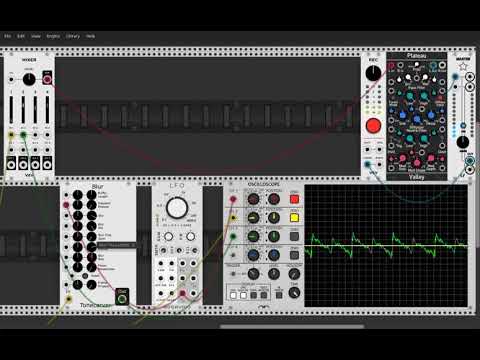 Very much looking forward to this!

And I remember your VSTs–they were great!

A very warm welcome to Rack. You have arrived at an excellent time!

Output can be produced at any rate (time stretched, time compresses) and direction (forward, reverse, jittery) by modulating the cursor position parameter.

Let us know if you need a tester. I’m on Mac FWiW.

Also I’m a graphic designer if you need a panel.

Good to see you create for VCV, hopefuly some parts of your older vst work wil make it into VCV modules as well

Cheers, I’ll be trying this as soon as it’s released! We can never have enough sound mangling modules, and this looks like a really interesting one.

Thanks. I am on Windows 10, 64 bit. No Mac version at this time unfortunately.

Do you need access to the source code and/or a running copy of the module to do the panel design?

Putting myself up as a Win 10 tester.

You could set up a GitHub repo and just have a release page with the zip file there. Therefore anyone who wants to test can download it.

You can send the zip, or upload it at github,( if you use github),
or send me a download link, or I can send you my e-mail … just as you like.

This thread might be worth looking into, if you want to crosscompile for Windows, Linux and Mac - in an Ubuntu docker setup.

The tool chain also supports a Docker-based environment. This decouples the host OS from the build environment.

I can build from source and yeah it would be helpful to be running it. But it’s up to you.

But it will not work. You must use a proper SDK generated from Xcode on macOS, which requires you to have a Mac machine (and adhere to the Xcode license).

Ok, thanks. I’ll keep your offer in mind once the features and control set are firmed up.