Here’s a quick video showing how to control the button lights of an AKAI APC Mini from VCV Rack.

How would this be used in a useful scenario? Can you send a sequencer’s output to it and then press the buttons to change steps etc somehow?

I’m very interested because I a launchpad mk2 which pretty much useless for using with Rack.

If there was a sequencer that had either a cv output indicating which step was active, or an output per step that sent cv when that step was active, then you could totally get the launchpad to display the active step. mapping the launchpads buttons to make steps acitve/inactive is easy enough

How would this be used in a useful scenario?

I use something like this to toggle the colour of the APC Mini buttons when a track is muted/unmuted. 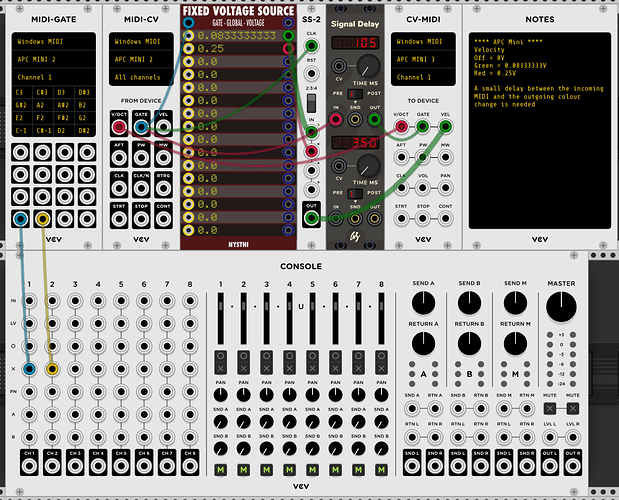 mkII’s visual feedback doesn’t work with vcv rack. neither do it lights up like it does with live. i wish someone could write a script or something for this.

You mean a Novation Launchpad Mk2 ?

I just found the Launchpad Programmer’s Reference on the web. According to it

So the same technique that I used for the Akai APC mini could work with the Launchpad, as long as you send the right values. 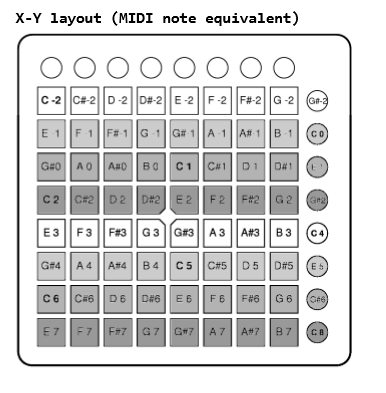 I don’t have a Launchpad, so I can’t try it.

Thanks for this! I did try reading this guide. Didn’t understand it though.

I was experimenting with this with an akai mpk mini, trying to make a sequencer kind of thing that could be used without looking at the screen. the main problem i found is that when you press a pad, it lights up by default and on release it sets off any lights that was turned on from inside rack for example. a lazy solution would be for a module to refresh all the leds regularly by sending out the proper note on/off for each or just “counter” any press the user makes, not sure how other software go about this, but this behaviour makes it difficult to do these kind of things with the stock midi modules unless you just want to use the pads as a screen (might be different with other controllers).
kinda left it for now cause the 4x2 grid i have isnt much, altho the same thing can be done with the second bank and the cc banks as well but then it got really specific to this one controller so i stopped. having to duplicate most of the midi io code from the core modules didnt help either (this would be needed to not waste cpu on translating midi to cv and back). might go after this again later on, I started making the sequencer thing without the midi-out part, and not yet sure if it was a good idea at all x)

@sharmadhruv741 you need to first figure out what note a pad sends and on what channel (if you want to stay inside rack then go through the channel menu of midi-cv until you have an output), then send the same note out on the same channel with cv-midi module. sometimes notes/channels are configurable for controllers so yours might send different notes from what the manual says.

Indeed there are some significant issues with using feedback. Some problems you can create a fix for but it’s incredibly impractical, and others you can really can’t solve (buttons on modules that don’t change from 0 to 1 when you press them). I expand on this a bit here.

that does seem impractical haha
iirc the mpk mini’s config software had some setting about momentary/toggle for the pads, maybe thats also available for the apc and maybe it can help with this somehow, idk but might worth a check.

Yeah it’s worth messing around with I think. The active step problem means that you would need a huge patch just to control one sequencer with real visual feedback and it is a pity considering how sophisticated Rack is in many other areas. @Vortico has proved he can deliver a vision so I trust that he has something in mind for this for future versions. I just want it now!

I’m not sure this could be integrated into Rack (meaning the core modules) you would first need a sequencer to work with too and I don’t see how it could be generalized, since controllers are different in terms of number of pads etc, some can use multiple colors as well for example. If something is specific like this you can almost be sure Andrew isnt gonna work on it, understandably.
All of it could be done in a separate module tho no need to put it inside the core, but its more work than doing other modules without the midi communication.

Haven’t read anything in this thread except the title but noticed I was tagged. Why would I add an AKAI feature into Rack? Is AKAI paying me?

The thread is more about using controllers (doesnt have to be akai) with pads that have leds built-in which can be turned on and off with sending midi notes out. And were talking about possibilities to utilize those as displays for step sequencers.

Yeah, that sounds like a job for a third-party plugin, not Rack itself or a VCV product.

my thoughts exactly, I think @TroubledMind was mentioning you in a way people mention gods when they hit dead ends with something

I was hoping there was a vague plan to create something that allows controllers to behave like you can get in ableton with the control scripts. To me the controller capabilities in Rack are currently very basic and don’t really play well with a fair amount of hardware.

I haven’t read everything in this thread but my MIDI-CAT module provides controller feedback for MIDI.