The envelope generator I'd love to have in Rack

In Reaktor, there is a module called Audio Table. It is quite useful to have such a device to draw envelopes with a totally free shape. If you combine it with a slider you can even separate the drawing in 2 parts to have an ADS part with a separate R part. Imagine you have then two potentiometers to adjust the duration of each part and it would be a great module! 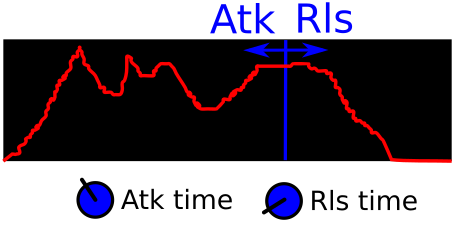 I’ve been thinking about developing something like that…There really doesn’t exist anything like that for Rack yet? (I was thinking more along the lines of a breakpoint envelope thing, but adding freeform drawing to that too probably wouldn’t be too complicated…)

Haven’t found it. But I can’t swear it doesn’t exist. There are so many modules…

a couple of people have talked about doing this kind of thing. The nearest that currently exists is mscHack Envy 9. It’s segmented rather than totally free.

You can draw envelopes in mschack envy9, also the new pdarray module but haven’t tried that one yet, neither have the split option that you mention though.

PdArray plugin for VCV Rack. Contribute to mgunyho/PdArray development by creating an account on GitHub.

I haven’t tried it yet either, it just landed in the plugin manager

If I understand your idea correctly, you could do this using two copies of PdArray.

It looks a bit messy, but the basic idea is to switch to the second array when the first finishes. I’ve used HetrickCV’s excellent Delta module here to detect when the gate of a Miniramp finishes. The knobs of the two Miniramps determine the attack and the release. The first Delta clocks the sequential switch, the second Delta triggers the second ramp when the gate (from Little Utils Button in this case) ends, and the third Delta resets the sequential switch when the second ramp finishes. You just have to make sure that the arrays line up in the middle. The scope also showed some glitches every now and then, so this might not be a perfect solution.

You could probably replace the two Miniramps and three Deltas with the Audible Segment Generator, but I’m not familiar enough with it to cook up something right now.

pdarray only came out (edit: 4) hours ago.

how about to use the vector mixer as free drawing envelope ?

So, I just typed out a long (and hilarious) request for pdarray to be more polyphonic. Turns out it is already plenty polyphonic enough for anyone. Well played!

This is amazing! Just used it to morph the wave table on seven seas. Gorgeous!! Thank you lots!

I just realised that it is you who developed both Seven Seas and the other gem you are suggesting here, right? They are my new favourite modules! Even more thank you! Btw, is it possible to record a new wave in seven seas?. What is the rec button on top right?

I cannot figure out: what is the sampling frequency of seven seas - what freq does the osc have to be to record a whole period ?

I didn’t know that!

Got some new ideas from this thread, but can’t you do this with Mind Meld Shapemaster? I haven’t played with it enough (yet) but I believe you need the Pro version to sync with external clock which sounds like what you need.

Here is a brief intro video about it: Shape Master Ep.1 - What is ShapeMaster? - VCV Rack Tutorial - YouTube (a number of others from Jakub as well from Omri and others).

recording was just a gimmick to have strange effects

the best way for new tables is always to use wavedit

anyway recording is done at current system sampling frequency and sample will fill all the slots, linearly

you can have some sync using the trig to record

Now i just have to figure out the delay in num.samples for the record - and a KF time for vector mixer

I hear you - wavedit is better - the float<>int conversions will have a great effect on the sample start/period with this silly method.

You can do exactly what the OP describes using 2 channels on ShapeMaster. Pro.

If you are OK with static attack and release times then you only need one channel and you can do it with the free version - both free and Pro have sustain for ASR envelopes.

If you want to be a able to have separately modulateable attack and release times then you need Pro for the SM triggers expander - use first channel for the ADS shape (with sustain at the end) and second channel for the release. Use the EOS output on attack channel to trigger the release channel. Set each channel’s length independently.