Another possible, early synth recreation in Rack, there is information but it is sparse. Ennio Morricone used this on some tracks in an electroacoustic manner on the film H2S a pre Clockwork Orange dystopian University revolt in space 1965 Faenza production and Dario Argento’s 4 Flies on Grey Velvet. Also used by John Eaton for his early work in the mid 1960s. Hainbach got to use one on his YouTube Channel. 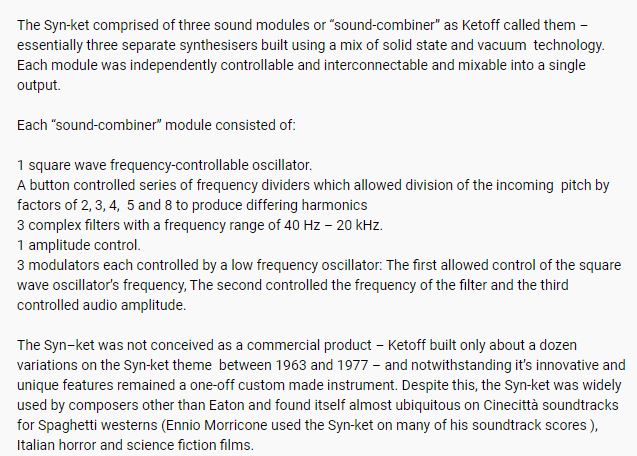 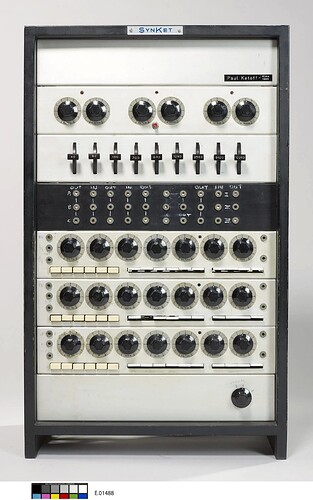 Playing around with the Synket an incredible tube synthesizer made in Italy by Paolo Ketoff in 1964. - YouTube

I didn’t know he did a soundtrack for Argento! don’t think I’ve seen 4 flies - have to seek it out.

Thanks for having a look, would your Stairway be good for the complex filter option on this synth? I’m sure it would? Any other of your modules work for the functions above?

Well I got this patch together, a bit messy and the CPU usage is between 87% and 150%, Anyone want to guide me to less CPU hungry modules or a way to have less cable connections? Any help appreciated… Pleeease!

good question. Never having heard that thing I can’t say. I guess my first though would be something from Vult. But Stairway does cover a huge range of sounds, so always fun to try. As long as the high CPU usage is ok (it’s really a pig).

Thanks so which Vult filter would do a less CPU intense job-Freak springs to mind? ‘The playing around with the Synket’ link shows it in use if that helps. Thanks .

I don’t really know the other lines so well. Maybe someone who knows the vults well will know. The vults do use a lot of CPU, but less than stairway. Fundamental isn’t very sexy, but it’s a good filter and pretty efficient.

Thanks, just put the performance meter on the patch I’m using and the highest of the Stairways was running at 9% that usual, before I took a LFO out of the drive socket-then 7%.

A fixed filter bank from AS is at 17%! So not the worst culprit.

Makes sense. I usually don’t process stuff that is un-changing or un-plugged (save some CPU). As modules are pretty nice. but many waste a lot of CPU.

bogaudio guy is super smart. All the Bogaudio modules I’ve looked at are super high quality, including low CPU usage.