SV Modular's NOT gate - the output levels seem odd to me.

I was looking for a simple NOT gate the other day. Something that when a +10 V signal is applied to the i/p, sends 0 V to the output. A 0 V input should return a +10V output, much like in a 7400-series TTL device.

This is the truth table I get from the SV Modular NOT:

I could not use it (without additional modules) because there was no mode where the output switches between +10 and 0 volts. In CV mode the o/p never goes greater than 0V.

The +10 to -10 V is merely changing the polarity (which looks the same on some meters), and (not complaining, just curious by now) what is +1.7 V for? It seems like an arbitrary value, unless there is some other module that expects it that I’m not familiar with. That +1.7 V on the input also appears to be the threshold for switching the output.

Unexpected behaviour makes me nervous, so in the end Stalys’ “8 Not operator” module served my purpose.

Submarine has a ton of logic modules, and their stuff is top notch.

Count Modula: VC Inverter or Lunetta Modula: Hex Inverter will also do what you’re after. 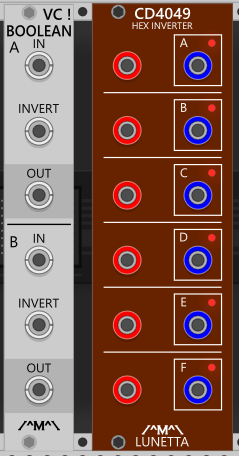 I had the VC module, but the INVERT input just complicated planning for me. It sorta turns it into an AND gate?

I just subscribed to Lunetta Modula to try out the CD-4049, and it’s exactly what I was looking for. I probably didn’t find it earlier because I was searching for a “NOT” gate. So many modules assume ambiguous notions of what “invert” means and they dilute the search results.

The CD-4049 even has the Schmitt trigger/hysteresis behaviour of a “real” CMOS hex inverter.

Oddly enough, just last night I was wondering if anybody had created a bunch of modules based on the 7400- or 4000-series logic devices. Your CD-40xx series are just the ticket.

Now that a bit of celebration is over, I’m still wondering (because FOMO) what an output of exactly +1.7V from the SV Modular module is intended for.

With nothing connected to the “Invert input”, VC Inverter should just function as a standard logic inverter in that a high at the In should result in a low at the Out and vice-versa.