I was initially disappointed that the SV Modular dk Drum Sequencer doesn’t have any decent documentation. But after experimenting with it, I am finding it fairly intuitive.

But I am still stumped by one critical feature - Is it possible to set the length of a given pattern? Or does every pattern have to occupy all 16 steps? I am a big fan of odd time signatures, so controlling the length is pretty important to me.

I realize I can use one channel to reset at a particular step, and that can be enough in some circumstances. But that can be pretty limiting, and is not a general solution.

You could count the clock pulses and reset the DK when the step length is reached like this: 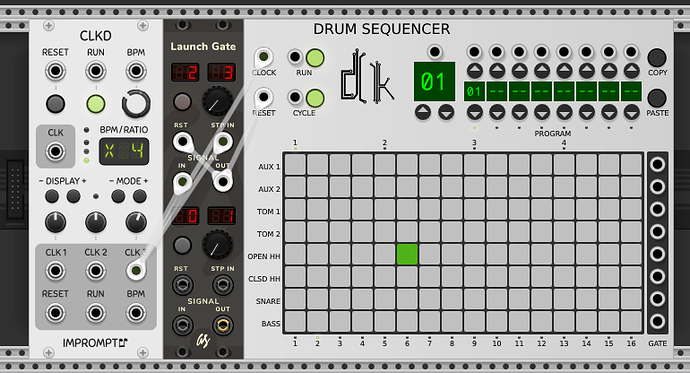 Sure, a variation on using one of the channels to reset. Easy enough to do one pattern. Setup program 1 to use pattern 1 of length 16, and program 2 to use pattern 2 with one channel resetting at step 11. That gives me 7 channels of gates with 27 steps. Using your counter idea would preserve all 8 channels.

But it does not work well if I want to alternate with a second pattern of length 27 using patterns 3 and 4. I would have to either

Neither of those options is appealing to me. It quickly strays from the simplicity that made the drum sequencer attractive in the first place.

And then if I want to freely mix many different patterns of different odd lengths in some arbitrary order - it quickly becomes unmanageable.

didn’t find any better drum sequencer for patterns than DK.

that’s why I purchased VCV pro, so the DAW dose all the programming. Or there’s the hardware option with semithin’ like the beat step pro.

there’s the piano roll but it’s monophonic so you couldn’t play two drums at the same time, and there’s the other options that don’t offer what you’re looking for.

I think you could do what you’re aiming for using the anti-matter function of Hexaquark. (If you were open to switching horses.) That lacks the simplicity of the dk layout, but it looks damn powerful. I will definitely check it out. Thanks.

Yeah. It’s got a bit of a learning curve, but it’s worth the climb. It’s also not free. If I could, I’d gift you a copy, just to see what you’d do with it. But unfortunately, the gift-a-module feature has yet to become a reality. However, if you put out an album of your VCV + flute compositions on bandcamp, I’ll happily buy it for the asking price + that of Hexaquark…

as REDACT3D noted, it’s best to use an external clock and counter as reset for that behavior. the drum sequencer is just set up as a simple step sequencer - I figured that any additional features would likely make the interface much more complicated (needing a large manual).

but, that said, drumkit is open source, and PR’s are usually accepted, plus its license is open enough that you can create new modules based on its code/interface and release them on your own.

Thanks! I’ve been thinking about taking a stab at creating some modules, so both of those options are appealing. If I find time I may first try to modify the code - add a pattern length control (no CV control), and perhaps do a PR. I think it can remain just as intuitive as the existing UI. That might be a way of easing into module development.

Yes, but it was the combination of a simple intuitive interface coupled with the ability to program multiple phrases or patterns that drew me to the SV sequencer. Most of the sequencers you list are intuitive, but lack the ability to program more than one pattern. I’m pretty sure one of the Impromptu sequencers could do what I want in spades, but the design and interface intimidates the hell out of me. I’ve cracked open the manuals a few times, but the complexity drove me away each time.

I suspect there are some midi based piano roll type sequencers out there that could work, but I don’t want to create midi files.

And I’m also looking for a free sequencer, not so much because I don’t want to spend the money, but more because if I post a patch, I want it to be accessible to the widest audience possible.

Really the SV Modular sequencer is exactly what I am looking for, except for the missing function to set the length of each pattern.

I do recommend the HexSeqP - it has found it’s way into my Template-Patch. CV-adressable Patterns, small, and with a ComputerScare Custom Blank and a screenshot from the HexSeq-Manual it is really easy to edit. And by just face-rolling over the numpad you beat every random trigger generator 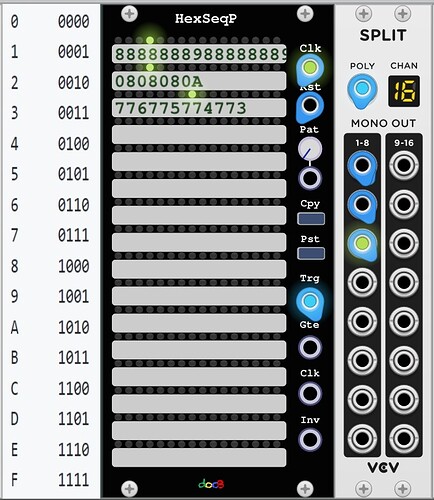 Yeah, I like the design, concept, and compactness of that sequencer as well. But unfortunately it only works with step multiples of 4. I’m really looking for odd numbers. In my immediate case, I’m looking for 27 steps. I put in a couple feature requests in GitHub. One set of requested features for gate and clock width outputs was implemented in the HexSeqExp expander. But my request to add the ability to set arbitrary pattern lengths has been deferred for now.

I probably could use a reset to shorten the length to whatever arbitrary length I want. And there are plenty of channels to choose from, so one channel could be reserved for the reset. Not ideal, but I think I can make it work with this module. Thanks for reminding me to consider this module.

I also just realized I can probably use ShapeMaster - It is easy to set the grid to nearly any arbitrary length. Drawing in the beats isn’t as simple as pressing a button, but it should work.

I’m also looking for a free sequencer, not so much because I don’t want to spend the money, but more because if I post a patch, I want it to be accessible to the widest audience possible.

I think my Entrian Sequencers can do everything you’re asking for, and although they’re not free, you can save your patch such that it can be played using the Entrian Free plugin, which includes play-only versions of the sequencers. See “Sharing your patch” in the manual.

the Entrain module is outstanding (even the free midi player) because of how you can still import midi tracks and play them back. I was using Ableton to record midi tracks and would import them into Entrain to the sequence before getting pro. great little timeline. 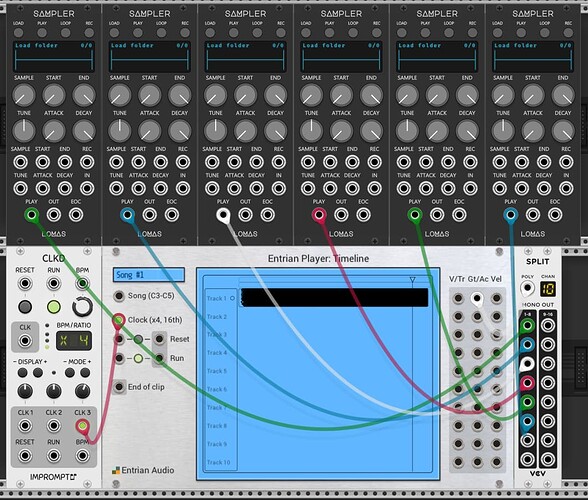 I use the timeline like this. here we can see the drums for Rick roll

although they’re not free, you can save your patch such that it can be played using the Entrian Free plugin

Ooh, that is a nice feature. But I am hoping to avoid midi, though I can’t say I have a compelling reason.

I had never seen it, but after reading up about it - yeah - that would be perfect! No need for internal sound banks though. Just triggers needed, and the velocity/accent settings would be an added bonus.

Ahh - I had looked at that, but not closely enough to realize there was a manual mode. I would require two to get 8 channels, but it definitely looks up to the task.

I don’t want to advertise for Reason on the VCV forum, but if any of you awesome module developers are looking for inspiration for a pattern sequencer … this is the most intuitive programmer I’ve ever worked with. it almost makes things too easy if you know what I mean.

How it works in the timeline by allowing you to place a loop of the pattern. So you just press record and it’ll record the pattern changes as blocks that you can edit after recording.

You can send midi and play each channel live with a keyboard or another sequencer.

You can record live mic audio into each channel live and use those samples as drums or long vocal loops. By clicking the Sample button or just select the sound from the sound bank to play.

on the Back of the drum machine are gate I/o’s and CV pitch ins, along with the independent stereo out. Allowing one to use it as a gate sequencer for other units. I would often sync up several as clock dividers for instance whist playing audio samples.

although in reason you record the knob movements in the timeline - so there’s less modulation for random style music typical of modular.

with the ABCD banks you get 8 patterns each bank and she goes up to 64 steps in length. If you use multiple machines set up in clock divider format, you can get more patterns then you’d ever need.

I always wanted to see an expander that would provide the buttons for those 64 steps insted of cycling through the button display of 16 steps.

hardly ever use the flam lol

I am hoping to avoid midi

I’m not sure what you mean by that…? The Entrian Sequencers are Rack sequencers producing V/Oct, gates, triggers, CV, etc. like any other Rack sequencer - there’s no MIDI involved.

I totally missed the boat on that one. Thanks for encouraging me to look a little deeper.