This will be a good place for test feedback and stuff.

I would like to add some more features to this module. The manual mentions that “it would be nice” to be able to set for a key besides CMaj

Some controls on what it does would be cool, although probably a bit subtle. An easy one would be to allow the ranges of the voices to be different. ATM they are limited to somone’s version of the standard vocal ranges for bass, tenor, alto, soprano. The results might even be audible!

Changing some of the rules, like allowing more inversions is easy, and possible, but probably the results wouldn’t be easy to notice - but maybe?

Oh, and a black notes on white paper option might look nice, for traditional people.

If someone didn’t see it where I started my own thread, some sample patches.

If you follow the Community forum as obsessively as I do, you know that @Squinky is working on a new module called Squinkytronix Harmony. This is a “simple” test patch. Of course nothing is simple when I do it - I feed each of the voices (B T A S or Bass Tenor Alto Soprano if you’re a choir nerd) into a signal delay so that each mono voice is delayed by a useful rhythmic interval. And then into an AS Delay Plus Stereo FX because everything sounds better with a little delay. I limited the patc…

I don’t know what it’s doing on the inside. I do know that I could use a quantizer after Harmony to force it into a minor or modal scale. It sounds entirely too optimistic now! I also did a patch with the Arpeggiator. I see how the arpeggiator is supposed to work, but to use it grabbing notes from Harmony’s output I had to mess around a bit with gates and S&H on the chord output to fool it into thinking I was holding down a chord. It could maybe use a mode where it collects the last N notes …

I put some replies over there, too. Here’s a copy:

I think it would be “better” If I made the quantizer on my input expose other scales.

I have to confess I haven’t tried Arpeggiator after Harmony. Even though that’s why I made it. It might need some tweaks.

In a case like this the mono gate (where you found the bug) should work. A monophonic gate should “sample” all the merged CV inputs. Note “should”

In a case like this you could turn on “hold”, then set “length” to like 8. Then it should hold onto the last two chords.

Yeah as they say in German “Es wäre nett!” You might be able to use the CMaj generator and some offsetting to get it to work for the natural modes, since the other 7 modes are ‘all the white notes’ but starting at a different root key. If you want to mess with the minor scales other than Aeolian/Natural minor, that might be a bit wonkier. I only know the music theory I picked up on the street corner, and my 2 years as a Music major. I never got as far as the music theory class, though I do own a copy of Piston’s “Harmony.” I own a copy of “Being & Time” too but I’m no philosopher.

In a case like this the mono gate (where you found the bug) should work.

I’m actually running the version I compiled where I fixed that bug, so ¯\(ツ)/¯

does it not work? with a mono gate it should arpeggiate the four notes coming out of Harmony. Maybe a bug… ?

You might be able to use the CMaj generator and some offsetting to get it to work for the natural modes,

Well, several issues here. One is that the quantizer that’s in Harmony alredy knows how to do all the modes in all the keys. Look in ScaleQuantizer and Scales

second, yes, you can make most quantizers work in any diatonic key/mode by shifting the input and the output.

third, year are right that Harmony uses the rules for major keys. As you probably remember, Piston gets more complicated when he starts to talk about minor.

My theory, however, Is that even with the rulse for Major harmony, the results will probably sounds “good enough for rock and roll (or modular)”.

Oh, also, if you look in testScaleQuantizer.cpp you will see that there are 6 tests, and two of them are for the keys of GMaj and GMin.

does it not work?

It seems to works differently depending on what I’m doing:

Here’s a new iteration of the patch where I’m trying to use quantizers to force it to natural minor harmony.

Hey - I took your advice on harmony and added that feature you call "Polyphonic outputs channels 1-N”. That name is to me not super clear. But I guess it doesn’t matter - I don’t see a reason not to leave it on all the time.

Anyone have a better name for this feature? Edit - doh! I thought it was “one minus N”, but of course it’s “one through N”.

I have all this diatonic harmony working just fine in Seq++, so I’m just borrowing that an putting in in Harmony. Other than a bug or two it works fine.

Hope to have a new test up soon.

Got the GPU usage down to just about nothing: FPS seems fine: 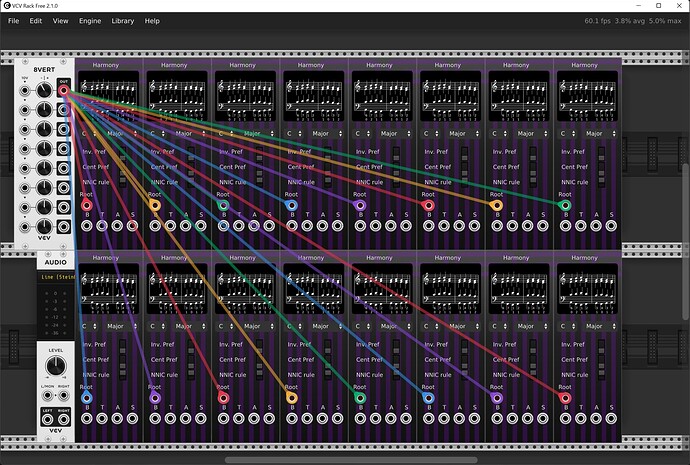 For Meander with 4 threads, one instance achieves 60 FPS but 2 drops it almost in half and additional instances don’t change FPS much.

There is a lot I do not know about threading.

Probably a better question would be if you have any lessons learned for maximizing FPS in modules with procedural panel graphics?

I started a new thread to reply to this.

A link is helpful

reply to @k-chaffin I am far from an expert at NVG drawing, VCV widgets, etc… I’ll tell you what little I know. There is one “hammer” that VCV uses to make drawing efficient, and that is FrameBufferWidget. Almost every widget in VCV uses this. What it does is keep a bitmap representation of a widget, and when it needs to draw the bitmap is used. When the widget needs to update its appearance, it sets FrameBufferWidget::dirty to tr…

I still need some people to use this thing so I can get more good feedback. I will say a certain well-known personality did a preview for his Patreons. He did mention that is pretty much impossible to get bad sounding music from Harmony. But I’m sure it’s possible with some clever patching!

Bunch of new features now. From the changelog:

Added all the diatonic modes, and all 12 roots. Please read manual for caveats about this feature. Tweaked the panel layout to be slightly less bad. Poly outputs (1-N). Indicators below the port will tell how many channels are patched. Added controls for chord generation. Made score drawing in Harmony use less GPU resources. Added option for black notes on white paper in score section. Re-centered the score so it has less blank space at the top. Fixed pitches being generated outside correct bounds