Is there a VCV module that behaves similar to the Nord Modular G2’s Random Pattern module?

The basic premise is it will spit out a sequence of repeating values or triggers that are clock synced, and it has options for the pattern length, probability (how often the value will change/trigger per clock input), and two “pattern” selectors tabled A and B that change pattern of the sequence of values.

Since A and B both have values between 0-127, there are thousands os possible repeatable patterns, not including probability or loop length, or modulating any of those parameters.

The key to this, and what I haven’t been able to find a module that does, is that all patterns are repeatable and replicable. So if I set Step Probably to 100, Length to 4, A to 2, and B to 54, each and every instance of the module will send out the same sequence across different patches.

I guess the closest I can think of is Topography/Grids, but with set values on top of the repeating patterns. It’s not quite a Turing machine, it’s more predicable than that, but it can get just as random with modulation.

Is there any module that comes close? If not, is there a way to recreate something similar with a combination of modules that I’m missing?

I am not aware of a module that does exactly what you describe. Yet, there are so many sequencers in the library it’s possible there’s one that gets close.

If you’re looking for kind of reproducible yet random rhythms maybe this thread has some ideas to offer.

This is the best explanation I’ve ever found of the original Nord module, from electro-music.com. Not as active anymore, but probably the best source I know of for Nord Modular-related information.

The patterns are not random but pseudorandom. The idea is that a sequence is generated that cycles through all possible numbers in the 24 bit range until all numbers have passed once, and then repeat that same pattern all over again. It is a long pattern where for e.g. every number or for each ‘two consequetive numbers’ combination, there is a specific new number. The pattern appears random as there are just so many numbers in that one very long sequence. It is an example of a case where something is actually totally determined, but with soo much info that it appears random to our ears. To our ears its just ‘info-glut’.

It is possible to jump to any location into that long sequence and always get the same sequence back from there. So, the pattern generator just plays e.g. sixteen notes from the sequence that is actually over 16 million numbers long.

It is theoretically possible to calculate the sequence, the methods to create that one long sequence are simple. The two methods used are the ‘linear congruential’ method and the shift-register method. The first method takes a number and produces a new number by multiplying the original number with a certain prime number and then adding another certain prime number. The other method is like a hollow pipe where bits are shifted in at the one end so bits tumble out on the other end. Just imagine these bits to be black and white painted ping-pong balls. Two or more bits at a certain location in the pipe are checked for parity and it is the result of this parity check that is shifted in at the one side of the pipe. The methods can be calculated if for the first method one knows the two prime numbers, and for the second method which bits ‘in the pipe’ are actually used for the parity check. Of course Clavia says they have forgotten those prime numbers and for some reason the code that showed which bits in the pipe are used has been stained in stroopwafel liquorice, so it has become unreadable. Wink

So yeah, you can be sure that the patterns always repeat themselves, it is inherent on how the patterns are produced in the first place.

The other random modules actually use that same long ‘linear congruential’ sequence. Noise does repeat after some three minutes or so. Dividing (2^24 minus one) by 96000 gives the length in seconds. 174.76267 seconds says my calculator. Ok.

My interpretation is it’s like if you had two different sets (e.g. A & B) of 128 (or some other musical division of) states values, with many variations of those values that you then combined to get a single set of values. The lists of values would always be the same, but by combining different variations and changing when they repeat, you’ll end up with an incredibly wide range of results.

That first version is more visual, but in the middle of writing this, I actually found a simpler way to build this out using docB’s P16, which is close to part of the original Nord module, but with fewer variations. Still, even with just 16, there are a lot of possibilities. I’ll include both patches below. 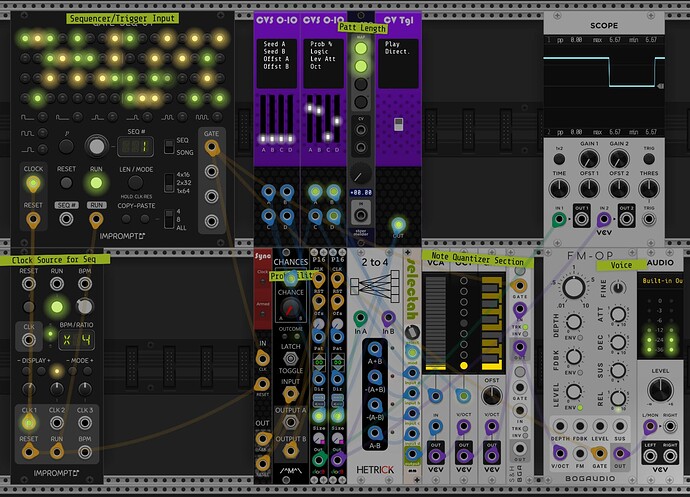 I think computerscare Horse a Doodle Doo will do ya solid. There is no randomization involved, but turn the pattern knob and get 2 channels of unique CV and 1 channel of trigger outputs. Fully polyphonic, get different sequences per poly channel via the spread knobs.