Hey guys, I’m new to the modular world and just came up with a sequencer idea that I decided to try to at least partially implement in VCV rack because I don’t know of anything that does this in module. I think it came out pretty well so I thought I might share it as its one of the first patches I’ve made that I think sounds at least the slight bit like music.

The entire sequencer consists of 3 main parts as well as a bunch of logic modules:

Here’s a screenshot of the sequencer (all the sequencing controls are just in the first row): 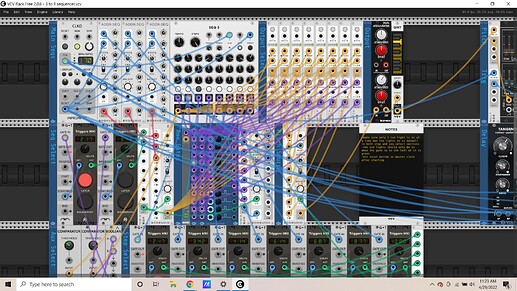 Here’s the rest of the patch, just one voice with delay and some drums (sounds great in stereo): 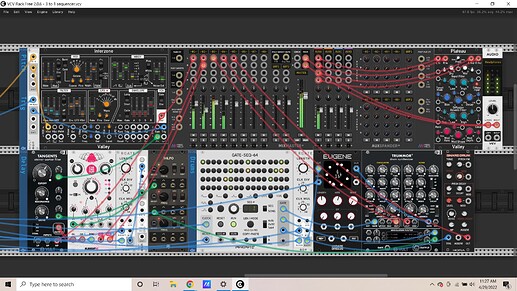 Finally, here’s a link to the patch: 3 to 1 sequencer.vcv - Google Drive (read the notes in the sequencer when starting the patch)

and a short recording of it I did: 3 to 1 recording.wav - Google Drive

Feel free to mess with the sequencer controls and make your own patches with it. It is pretty cpu intensive (maxes out at ~50%) so one voice and drums was all I did with it. Thanks for reading and let me know if you have any feedback or suggestions.

Great idea and a fascinating approach.