Working with a couple sequencers but it seems there is still signal coming from steps that the triggers are turned off. I have seen videos where that isn’t the case but nothing to show how they do it, just seems to happen.

Any advise would be great!

could share with us a patch where this happens ?

For anything longer than a quick release it plays the next note in the sequence...

If there is a VERY short release it wont do it but wanting some sustain, like with a bass, plays the next note.

Oh I see, this sequencer has a trigger out, not a gate out, that is why. A trigger is a very short burst (a few samples long in the case of this particular sequencer), when a gate usually stays high for half of the step duration (in a lot of cases). This will work if you use an AR enveloppe, instead of say an ADSR, or change sequencer and look for one with a gate out.

There are also sequencers that have gates out that do it as well I believe. Just wanted to use standard modules that everyone has. I will try the AR. thanks!

Well if the gate is high half the step and the steps go fast, it will stay up for a short time, maybe that is it ? Anyway there is nothing “standard” about anything in modular world, only singularities, that’s what makes it interesting after all ! You could use a module creating a gate from a trigger, but to get the rhythm right you’d have to make a calculation according to tempo and time division used, and if you change any of those it will go wrong, so as a simple rule (it might be better to start with simple rules, even if after you only see ways to overrule those and that is where you get to be creative) I use triggers for sounds that are percussive in their nature (like a drum, or an acoustic guitar pluck, or a piano impulse and then a short dying stage => the release) and I use gates for sounds that need sustain (pads, long notes of any kind… you know).

Here is one with a gate that still does it. Maybe missing something?

The gate vs. trigger issue is a red herring - it has nothing to do with notes being played for “silent” steps.

The actual solution is very simple - simply shorten the release stage of your envelope. As it is, the release is bleeding into the next step.

Indeed, I misread the question.

If that is the case, how do I have a section that has some sustain with a sequencer but does not play the next note?

In an earlier patch, I set up a 8 channel round robin polyphonic sample and hold, to play drums with long sustains from SEQ-3. Not sure that’s what you’re after.

[image] Here’s one way of round-robin triggering drums with velocity - useful if the envelope of the drum is longer than the time between triggers. Drum-buffer.vcvs (15.9 KB) SEQ3 + 8Face is OK for sequencing [image] Drum-buffer-SEQ.vcvs (28.3 KB)

Will give that a try. Thanks!

If you want a note to sustain into the next step, then I can think of two possibilities.

The simplest is to add some reverb!

Another option is to use polyphony, coupled with a module like Bogaudio Assign, or Grande Tails that lets each note play on a different channel so that they may ring out longer than the length of one step.

Omri recently posted a video on how to use Assign 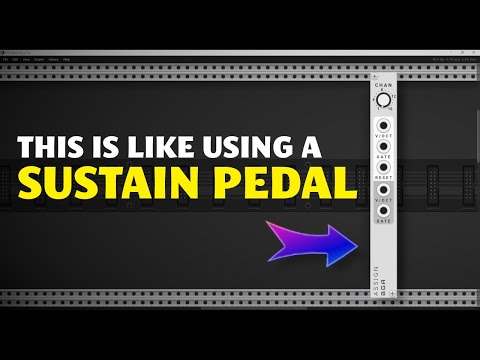 I think it is possible we might be overwhelming them with complex solutions to basic problems, aren’t we ? lol

Well, it doesn’t get any simpler than adding reverb.

And both Assign and Tails are quite easy to use. Watch Omri’s video if you haven’t already.

The solution proffered by Jens essentially amounts to the same thing as using Assign, or Tails, except it is much more complicated to setup.

Paul’s suggestion is also simple, and should be effective. It all depends on what sound you want. If you only want the release tail to sustain into rests, then use Paul’s suggestion. If you would prefer that all notes be allowed to ring longer than one step, such that notes can overlap, then either of my suggestions will work.

I know, you are right, all those solutions work and offer different paths to different results, ending resolving the same musical problem, I like how a few people jump on the problem and offer different solution, it is what I really like about this forum ! I am only saying that half joking half serious because if the difference between trigger and gate, ADSR and AR, the effect of release, the use of a S&H for locking values, etc, is not more or less clear, the solutions might be as obscure as the problem. Hey I might be wrong !

Edit : Also, for me, the “solution” would be to use a sequencer that outs a gate and offers long(er) steps (multiples of the clock) like say Bidoo’s DTrOY, or Impromptu’s SEQs that have a Tied Step option, etc.

The solution proffered by Jens essentially amounts to the same thing as using Assign, or Tails, except it is much more complicated to setup.

Assign didn’t solve my problem - I wanted to have a different CV for each triggered step, controlling the VCA. I could have used V/Oct on Assign for that - but that’s a different story

Admited, I didn’t know of Assign and Tails at the time - but I do now - thanks.