Seems weird to me.

I noticed this and to me it is not acting right. 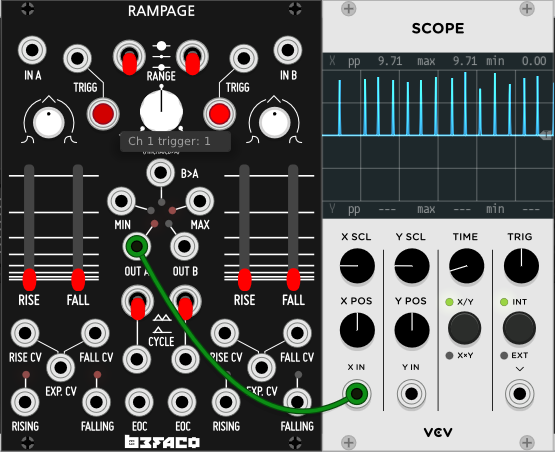 I do not understand why each trigger is not making the signal exactly the same voltage as the one before it?

are you sure is not a issue related to the screen rate of the scope? decreasing the scope time seems like normal

I think it is that as well as internal delay. After I played around with the scope being 100ms/div and going to 1/2/3/4/5… hz on a LFO triggering the Rampage (instead of manually) something is wonky for sure. Even at 3, 4, etc… they do not line up but should. Aliasing shouldn’t show up until a count greater than 10 (the 100ms/div) hertz.

Is there a better scope available?

there are a couple o oscilloscopes in the library, I m not sure if better or worst, I think must be better try a vst or external

I just looked in VCV and I didn’t have it so going to “scope” it out now.

Try the Envelope Oscillator EO-102 too. But trying to measure a trigger can be tricky; pay attention to the time base of the scope

Time base of 100ms/div that is 10 shots I should see per second or 1 per dividing line (graticule) if there are 10 of them. Being this sucker is only 7 is odd. If 11 hz comes in that is 1 more than it can show and aliasing should happen.

I tested using a comparator and the rampage seems normal. also I connected a clocked (I really trust on that clock ) and with shorts gates the scope show the same behavior

Welp, I can say using what I said with the timebase and configs I said it doesn’t.

When producing pure (very short) triggers, all the scopes in Rack skip some of them. They’re just too short to reliable display all of them, appearently. If you take the triggers through a module like “dgate” from Bogaudio, and widen them just a bit, you should be able to display all of them.

Thank you as I figured it was due to that and latency that is just the way that it is in the digital computer world.

as well Lars said, the comparador take the triggers what reach 10v and it send a gate , is like a trigger but more longer

Is this just a case of the scopes not handling the case of a single pixel representing multiple samples? I’ve made scopes in the past that could handle that. But in any case that’s one reason I use the submarine; it lets you zoom in really close to get a more reliable view.

The standard vcv scope has a minimum resolution of two samples. It won’t measure finer than that. There’s no reason other scopes can’t pick up every sample.