Yes, I know you can use a mouse with a scroll wheel. But that’s not what I use with this machine; I use a 4-button Kensington ball, and it has no scroll wheel. Great for bouncing around all over a patch in rapid order, but not so much for getting at the things I want.

Right now, I’m doing a cull of modules, removing ones with annoying/crap UIs to pare down the complement for ease/speed of use. But the dropdown for “Categories” ends at “Sampling” while the menu itself goes off the screen. Attempts to use arrow keys, various patches to the mouse driver, UI, etc…NOTHING works! Granted, this would be fine if there’s no module categories beyond “S”…but I know there’s more, I just cannot get TO them. And it’s not like I’m using a dinky screen, but a 27" H-P.

I’ve also seen older threads where the same complaint comes up, and in those, users pretty much have this consensus that the inability to do any of these things counts as a “bug”. I’m inclined to agree. Most users NEED to work by category when setting up patches, and creative work can easily be fubared by having to deal with annoying “not-music” problems like this due to the distraction they pose.

IMHO, this needs addressing. This isn’t a “make the module bigger” zoom in/out thing, but something that seems to me to be a serious problem. And yes, I tried all sorts of magnification trickery in my settings, etc…nope, didn’t work, none of it, as you can zoom onto the patchpanel view, but the right-click menus do NOT magnify/reduce with the screen. It seems to me that using the arrow keys might be an adequate solution for the off-the-screen overflow, as a lot of the other applications I use those in those situations. But the arrows aren’t recognized here for that.

I’m in the process of speccing out a dedicated VCV machine (yes, I think it’s that good…save for this irritating issue). This is a really annoying problem, however, and I think I’m now going to put that expansion on hold until this gets fixed. I don’t want to drop cash on a machine to run an app that’s got something basic like this missing. The audio’s great, the multiprocessor integration is excellent, having the degree of engine control we do is killer, but little “insignificant” issues like this can easily turn into a work-murdering stumbling block. If someone has a workaround that’ll let me either scroll ALL the way down via the ball or the arrow keys, I’d really like to know what it might be. But ultimately, this requires a fix…it’s just too glaring a mistake.

you can huff and puff all you want, and use a lot of capital letters, but features get added when they get added, and that’s just the way it is. If you are unhappy with VCV’s usability with non-standard mouses, vote with your feet and use something else that you like better.

Maybe something with a scroll wheel?

As someone with a big preference for using the keyboard, and a flaky scroll-wheel to boot, yes, I very much agree with you. For the Brand and Tags menus in the module browser to not have scrollbars is a major oversight and annoyance. In Rack v1.x they did have scrollbars so I would call it a regression. And I would really like to be able to use the keyboard with those two menus as well, both arrows and PgUp/PgDown. The lovely solution, in addition, for those two menus, would be to have them be combo-boxes with progressive typing/filtering if possible, they’re begging for that.

What about getting a very cheap USB mouse which has a scroll wheel and giving it a full castrato workover so that only scroll changes are picked up then in theory you could use both devices at the same time?

Hi Lugia. In the Kensington software perhaps you can map one of the buttons to scrolling functions, so that you press and hold the assigned button while the pointer is over the menu, then roll the track ball to scroll through the menu. Although from this video it looks like you might have to map two buttons, one for up and one for down. Good luck! 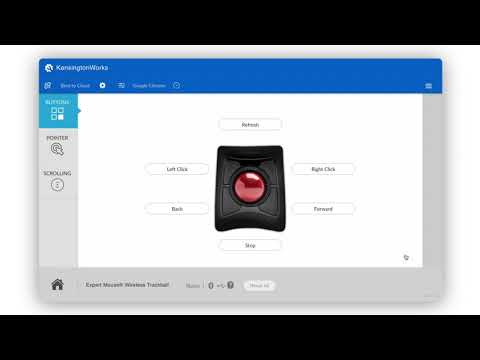