I have a gate signal and a CV value timed to hit the S+H simultaneously. The Scope shows they are indeed doing so correctly. But from the hovering mouse, I can see the input voltage isn’t being sent out (unless I switch to track + hold, which isn’t suitable for my current purpose). Any guesses about what’s going on? Does the CV value need a tiny head start, so that the “sample” command doesn’t sample 0? Thanks. 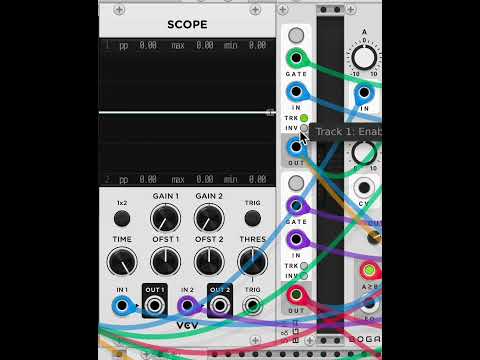 Where is your signal coming from? There’s a chance that it’s arriving later than the gate so that’s why it’s not working right. Can you upload the patch?

Out of interest, how to you check these things? There are a few instances where I’ve want to debug 1-sample delay type issues. Would be nice to know arrival order of two (very similarly timed) pulses.

I’ve just checked, and i think actually, the resolution of the vcv scope has increased in v2. There is still an open issue about it, but looking at the code it seems to have been implemented.

Apologies for misleading you.

To answer the question, there are other scopes which had better resolution.

I have a gate signal and a CV value timed to hit the S+H simultaneously.

Maybe I am stating something that is obvious to you. But maybe not…

Generally problem solving involves the question: Is there an assumption involved that does not check out. In this case “simultaniously” might not actually be “simultaniously” (or you would probably not have your issue…).

Specifically pay attention to the fact that in VCV Rack each cable adds 1 sample delay.

So: do both paths/chains leading up to the end point (S&H Gate) contain the same amount of cables? If not: add the correct amount of samples delay until both paths are sample accurately at the same point in time (so, measured in samples…). And see if that solves you issue.

Same can happen if you use CV as pitch/modulation info, while splitting/routing the CV via separate chains of “tuning” modules and finally merging towards some CV/pitch input. By the time a trigger/gate comes (e.g. to take a sample), some of the CV/pitch info might not yet be fully “up-to-date”, because somewhere in the previous “parallel” steps/paths it lags 1 or more samples behind.

I use this Setup: 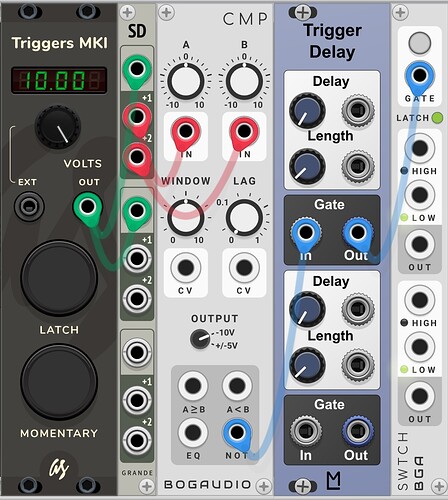 This will detect even 1 sample differences between triggers with the Bogaudio CMP with LAG set to zero. The resulting 1 sample trigger on the unequal out is then relengthened to a normal trigger with the trigger delay. If those triggers are not arriving simultaniously, the switch will switch. The triggers have to be the same length or you will get a false trigger at the end of the trigger, but you could relengthen them by using a trigger-delay in front of the CMP.

I don’t know if there is a module that can exactly show you the difference between two triggers. With this collection you have to do some trial and error to get the triggers in sync.

Submarine scopes are the best! You can zoom into a single sample easily.

Yes, the HS101 goes down to one sample with zooming, but it has only one signal input and no measurements. The wonderful EO-102 has two signal inputs, but does not zoom in to sample-level. Is there another one I am not aware of?

I think you are right. I use both of those, but I believe you that the 102 does not zoom in that much. Maybe you can do it with the logic analyzer? I have only used that one once or twice.

Why not request that the EO-102 zoom in that much? I think I requested more zoom in the 101 years ago, and got it )

Never thought of that, but I think that is a good idea. Could be used to analyze OPs behaviour, I think.

Maybe a new module idea would be something that analyzes the difference in samples between to moving edges (so a trigger and a voltage change for V/Oct for example) and applies a delay to the earlier channel. Two Inputs and Outputs, a button (“Analyze”, which deactivates after the next movement) and a display for the applied delay in samples.

Maybe you can do it with the logic analyzer? I have only used that one once or twice.

I love the logic analyzer, and have been using it a lot to test sample delays on a number of patches. I wish it had a bit higher resolution, but it is just enough to get the job done if I also do extreme zooming with Rack. It is great to be able to plug multiple signals in, and then use the user settable reference lines to check for alignment.

Both the EO and the LA scopes will record every sample at the extreme end of the TIME knob setting. At 100% zoom they will show 1 sample per pixel.

The vcv scope can now also record every sample since v2. I’m not certain what its visual scale is at 100% zoom

Yes, it definitely works. But detecting one pixel differences can be a bit tricky. It might be nice if it supported 2 or 3 pixels per sample to make differences easier to spot. But it is still wonderful as it is.