The Nysthi alwas shows up in the “Updates” list because I download a version not yet in library.

The log file isn’t very interesting. It shows the plugins being unpacked:

But they show up as still having outstanding updates.

I’ve seen it with:

I’ve seen it with: 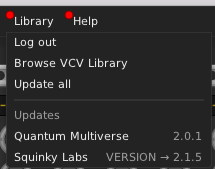 I suspect it might have to do with this commit, but that’s just speculation.

Oh good, I was just about to write them

You’re mistaken. It’s simply that 2.1.1 likes them so much it can’t get enough of them, over and over again

According to VCV Rack support, a change between 2.1.0 and 2.1.1 caused this to happen, but they’re asking the plugin vendors in question to change their plugins to avoid this.

I have provided an update for Squinky labs earlier today.

Welcome to beautiful VERSION. Of course it will take it a bit to get through the library process.

I built from source and the 2.1.6 plugin loads properly!

I have provided an update for Squinky labs earlier today.

Why did you need to kick the version number to 2.6? It didn’t look like there was anything wrong with 2.5.

Why did you need to kick the version number to 2.6? It didn’t look like there was anything wrong with 2.5.

Code updates were needed to accommodate changes in module load behavior in Rack 2.1.1.

That behaviour change bit the Squinky plugin (and others) that was using this behaviour for… something, probably some version-dependent feature detection logic, in the absence of the plugin version being available at init, because the manifest was only loaded later, which has now been corrected.