Apologies if this seems tangential but I believe it to be relevant to the conversation.

With regards to multicore vs multi-thread, things are very definitely coloured by use-case. Around 12 years ago when the digital content industry starting looking into parallel process enhancements to their archaic code bases (the likes of Houdini, Maya, 3ds Max etc are built on code that goes back many decades) it became a best practice to set your workstation to only use the available real cores in Bios (disabling hyperthreading). It was much the same with DAW’s. Over time certain tasks and setups turned out to be highly performant under hyperthreading and others less so. But even where tasks are hyperthread friendly without loss of performance there are always trade-offs. I’ve mentioned elsewhere that U-He synths such as Diva and Repro-5 are multithreaded when used polyphonically but in certain DAW’s, enabling multicore in the U-He synth will fight with the multicore capabilities of the DAW resulting in a drop in performance.

Ableton Live since Live 9 is automatically multithreaded but even here you need to build your set’s in a manner that best takes advantage of those capabilities. e.g. Whilst Racks in Live are a hugely powerful multi-timbral sound design tool, it’s more efficient to work with individual instrument/effect chains placed on individual tracks/channels and common effects like saturation should be used in a limited manner on sub-group tracks rather than on each individual track. It’s common sense really but it does help if you understand the under-the-hood engineering on at least a surface level as it helps you realise that multithreading isn’t a magic pill.

I’m optimistic to see multithreading implemented in VCV, but in an open source system with many third party modules there are more place for the system to encounter log-jams. And on that basis, I’m sure that artists will over time become experienced as to what provides the best performance both in terms of thread allocation (be that at a Bios level or within VCV) and module choices within patches.

Feel free to send your own default patch. Would be better if you open a new thread for it.

Demonstration patches serve a completely different purpose. The reason for the default patch is this.

So this patch serves that purpose. There’s a bit of wiggle room in the design space, so feel free to post patches, but they need to offer those features. 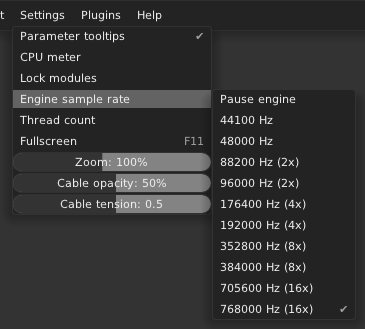 For the demo patches I would add the notes module to include a little description on what is going on in this particular demo patch.
I would also recommend mutliple demo patches which can be loaded from within the menu bar.

I’m not looking for bundled demo patches yet, but might include them at a later release like 1.x or 2.0. Rack 1.0 will include a single default template though.

If there will be a template then it is quite difficult. A pre-tuned SEQ3 playing a little ditty might be an alternative but I can understand why that might not be desirable either (new user moves a knob and can’t get it back in tune).

If there will be a template then it is quite difficult. A pre-tuned SEQ3 playing a little ditty might be an alternative but I can understand why that might not be desirable either (new user moves a knob and can’t get it back in tune).

Out of curiosity, is there a DAW that has a good entry user story? Having used a few (but admittedly not “mastered” any) it sort of seems like a hopelessly complex beast–kind of how things like Blender or Maya are hamstrung by necessary complexities. Syntorial’s format was very good, maybe a bit more extreme than desired for Rack though

I vote for a demo patch that is instantly playable using the PC keyboard (rather than playing via a sequencer) including a Notes instance telling you to use your PC keyboard to play it.

Whether a MIDI-CV instance can refer to the PC keyboard on all platforms I don’t know - it might need some special-case heuristic in the MIDI-CV module to automatically select the first keyboard input device. Worth the engineering effort IMHO.

Regardless of whether other DAWs have a decent Out Of the Box Experience, it’s a very good idea that Rack should have one!

Out of curiosity, is there a DAW that has a good entry user story?

Rack’s is horrible in comparison.

somebody ban this guy

This default patch is so cool, took me probably an hour to read an article and get something like this going when rack was version 5. The scope, mixer, & patch notes is a really nice touch.

Would love it if there was under-sampling as well.
If not now, then in the future VST version.
I had the chance to use it in the “other” version VCV.
And did like the ability of instant gritty/lofi for the whole patch at once.

And I like the idea of start-up patch for new users, looks fine to me.

Not useful enough for it to be a menu option, but you can change the sample rate by editing settings.json in the Rack user directory.

Out of curiosity, is there a DAW that has a good entry user story?

Apologies to butt in on this, but Ableton has a great entry user story both in terms of its lessons and bundled content. And Ableton’s attention to detail has meant that 3rd party content/addon providers have followed suit. Most Ableton add-ons come with example sets and lessons.

Would love it if I could turn this off or define my own default patch.

I couldn’t figure out how to use the sequencer in Reason (but the front/back panel wiring and patching … sure, figured that out no problem

) , or do anything in Live aside from accidentally bring in an audio plugin and then have it make a few random beeps from key presses, when I was completely new to DAWs. 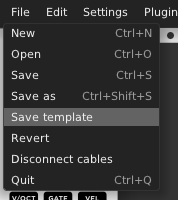 That is what the template file is for, documents/Rack