Q: Is there a simpler way to do this? (Polyphonic Probably Note)

There is a limitation to @almostEric’s PROBABLY quantizer. Rather it’s a feature but doesn’t work the way I want it to.

Namely you need a Pitch AND a Trigger input. Where other quantizers operate continuously, the PROBABLY quantizers introduce a Spread input, which means that given a particular voltage, it selects a quantized pitch randomly from a range around that voltage. He uses the trigger to sample the input and run it through the complicated transform that introducing Spread (and all Spread’s controlling parameter). This wouldn’t work with a continuous input/output, or at least it wouldn’t work the way PROBABLY quantizers work.

The limitation? PROBABLY will quantize polyphonically but the Trigger input is monophonic.

My solution - as in this Strip preset and the image below - is to send the sequencer’s clock input into the PROBABLY trigger, so each note input is sampled on every clock tick. Then I split the polyphonic Gate from the sequencer and the polyphonic Quantized Pitch output from PROBABLY.

The effect is what I wished the PROBABLY quanitzers did in the first place: Use a polyphonic trigger input for sampling the incoming polyphonic pitch CVs.

So is there an easier way to do this? As far as I can work out there’s only one S&H module, the Bark S&H/T&H but it didn’t work the way I wanted it to. I wasn’t sure what it was doing actually. 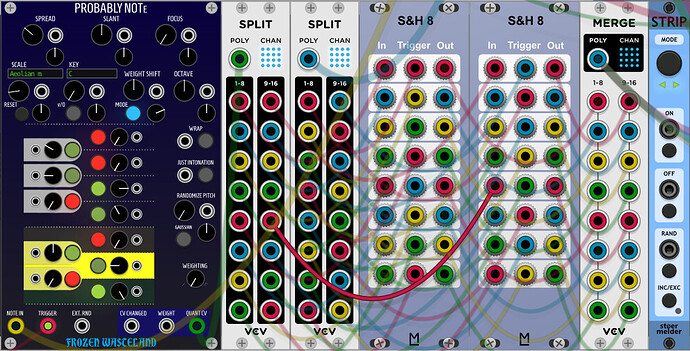 I’m in the middle of some other stuff, but the polyphonic trigger is coming

@almostEric I just don’t want to be the guy that just demands stuff from module developers. This solution works, and with @stoermelder strip, I can package your quanitzes with the stuff to do this.

I even broke down and looked at the source code, and it looks like there’s one place where instead of detecting the trigger & sampling all the input pitches, you’d have to loop over the polyphonic trigger input and do the corresponding channel. 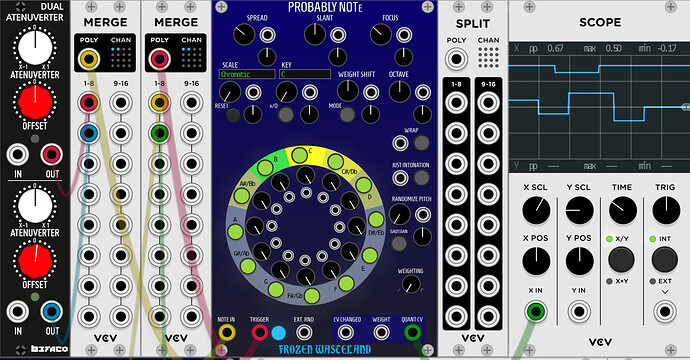 Does it need a switch? I’d think it would work to loop over voices and sample them using either the trigger for the current voice, or the highest # trigger. Something like

switch seems pretty obvious to me. Why does it need to be more complicated?

That seems less complicated to me