Hi all, I’m getting the ‘wrong’ MIDI notes output to ableton with this setup (i’ve attached some of the midi output here - clearly there are notes falling outside of the c major scale).

I’m sending cv from my hardware modular (from the instruo scion) into my computer via the ES-9, then using silent way vst to convert cv to midi in ableton. Then sending this midi into vcv rack (the VST version in ableton). i’m trying to quantize the cv and generate polyphony in harmonaig, send this out to ableton as midi and then send this midi to outboard synths. There’s a breakdown in the system right now as the midi I’m getting out in ableton is def not quantized to the scales I’m setting in harmonaig. Any ideas? 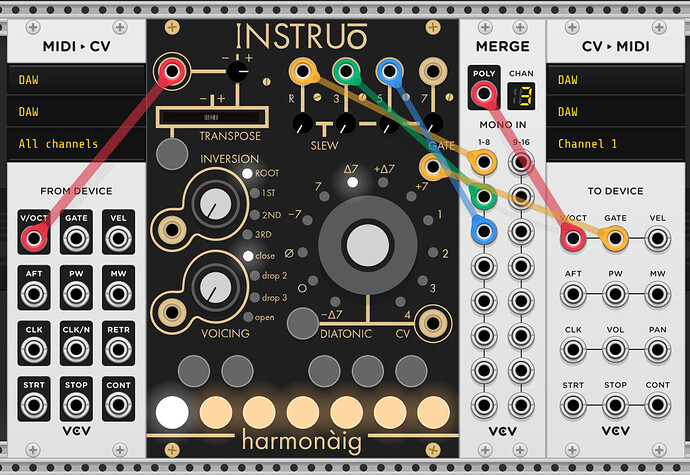 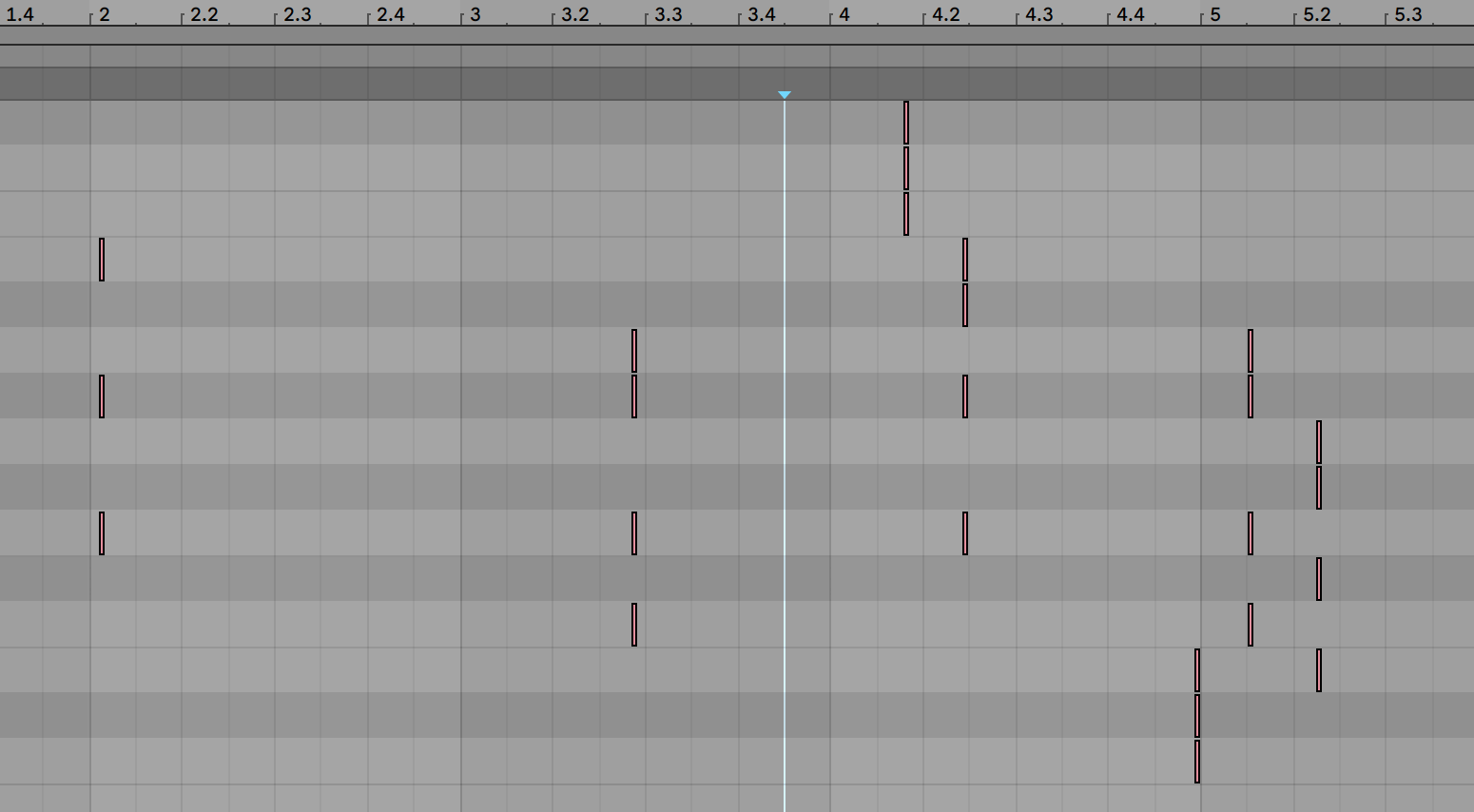 I m not sure how harmnaig work butn a 3r of E for instance , is G# it is out of C scale

you should quantize before send to the MIDI out

also the input must be monophonic

Harmonaig is not a polyphonic module on the way in. I do not have hardware eurorack. I can also get it to take a polyphonic cable on the cv in, but it only responds to the first channel. I’m doing this in the standalone version since I don’t even have something to plug it into. I suspect you are just doing too many steps, instead converting the cv from the outside world into midi before you send it to the instance of VCV with Harmonaig, you should be sending that CV directly into harmonaig. Not a programmer but it seems like it is somehow “partially” recognizing multiple multiple CV’s as a VST and tweaking a bit due to unintended function. It is only supposed to be taking a single source at each of it’s inputs.

Harmonaig is a quantizer. I’m trying to send quantized midi out.

Thanks. But I’m not sending polyphonic info into the harmonaig - I’m just sending one channel of CV. And in the VST version of VCV I’m not aware of a way to send CV directly from hardware into VCV. I believe you have to convert MIDI to CV first.

Chord quality knob is another possibility… there is no visual feedback of it’s settings seemed the most “stable” to me at 0 which you have to hover to see. as for the direct to VCV CV, These may help…

Ignore the the link haha… for some reason it does not include brand… go to the library and pick up the expert sleepers rack modules. They are utilities for their interfaces. Don’t have one to test for you.

There are a few things to consider: First I would multiply the gates into another merge (the one output to three channels on the merge). Second is the right-click-menu of the harmonaig. Is it set to Ionian Mode (Major) in the Modal Selection Menu?

Third is to check if your notes you are sending to the harmoniag are not polyphonic by accident. If you have a slight overlap the second polyphonic channel would be used and therefor not recognized by harmonaig.

You can actually use an audio in in your patch, to access the ES9 directly to get the CV in.

Edit: If that does not fix anything. Set Harmonaig to performance mode and hit a few buttons on it, is the generated Midi valid?

Hi - this is helpful! Thank you. I used another merge for the gates and that seems to solve the problem when the harmonaig is in performance mode - the ‘right’ notes are being generated by the c major scale. Weirdly tho, each gate appears to be doubled?

Yes, the harmonaig is set to Ionian.

However, when I try using a cv source external to the harmonaig - I used the vcv version of marbles - I’m still getting a bunch of notes outside my chosen scale. Very confusing.

You can actually use an audio in in your patch, to access the ES9 directly to get the CV in.

This is super cool - can you give me more info?

I am not an owner of ES-Modules. But as far as I know you should be able to use an audio-8 in your patch and set it to the ES-9 as audio interface. I don’t think ASIO is possible, since that is used by your DAW, but wasapi or directsound. And there are dedicated modules from expert sleepers in the library (for V2) but I don’t know what they are for.

I will check, if I can reproduce the gate and CV problem.

Okay, that was “easy”. I first did a patch with harmonaig in performance-mode and got the same results as you. So there must be something wrong with the gates.

I then used RANDOM for CV generation and got non-modal notes as well, both with the gate out on harmonaig or the trigger out on RANDOM. I then added a gate delay to lengthen the gates.

All the wrong notes are from channels that are not in the scale. I added a slight delay (0.01s) on the gate delay and everything is fine:

It seems to be that harmonaig is triggering before it sets the note values on the active polyphony channels and that seems to confuse cv-midi in what channels to send out. Strange and I don’t know if this is wrong in harmonaig or CV-MIDI. I would send a support request to VCV. 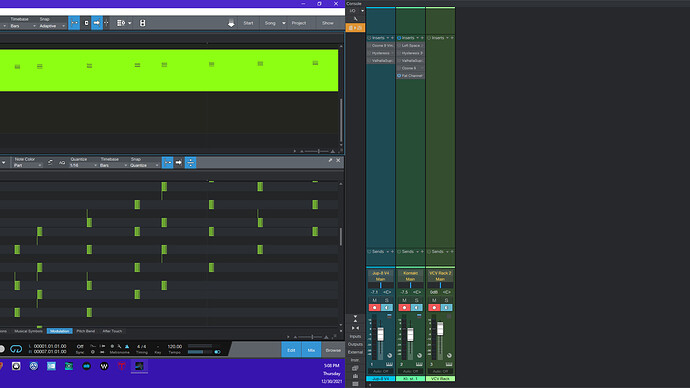 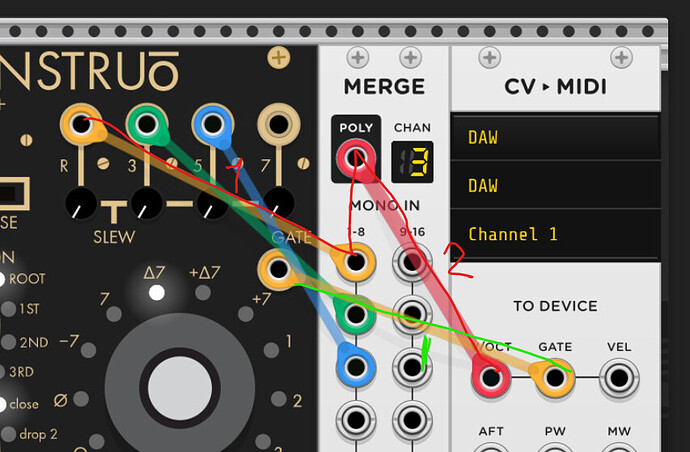