Could I get advice on what I’m trying to do here? I want Phrase-seq-16 to loop, while picking up notes played on a keyboard as it goes, so I change the phrase on the fly.

I found that when I simply triggered the sequencer’s Write from the keyboards Retrig it was hard (impossible) to get the timing right and I didn’t hear the notes at the point of playing them. When the loop came round, the notes were one step out.

I changed it so that the seq’s Write is fired from the clock, but through a VCA run from the keyboard’s Gate. So as long as a key is held down, it’s writing to the sequencer. That works - I hear the notes when played and they appear in the right place. Also I can hold down a note and that clears out the sequence.

Is this overkill? Is there a more elegant way to do this using the phrase-seq-16 settings?

Thanks for any tips.

(the FM-OP is just there to give a beat) 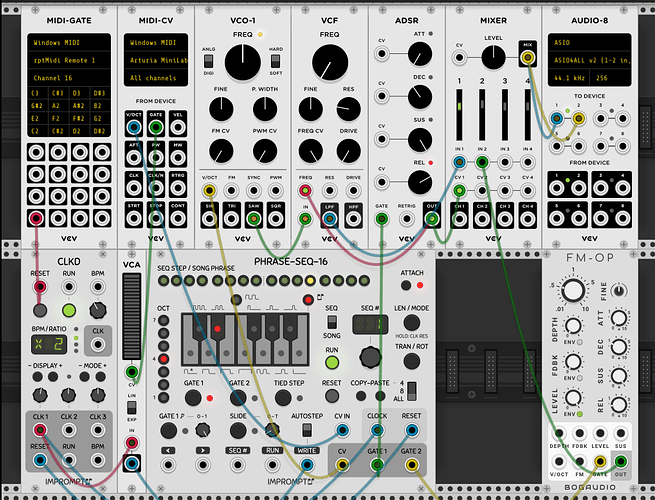 That’s a nice way of doing this, very creative. You can also try the Trigger Buffer from ML to quantize your notes to the clock, but there’s nothing in the PS16’s settings. Maybe it’s a good idea though to add an option for this, what do you think @marc_boule? An internal quantization to the clock for incoming notes in the CV input.

The VCA is being used effectively as an AND gate, and I was able to get the same behavior using this setup: 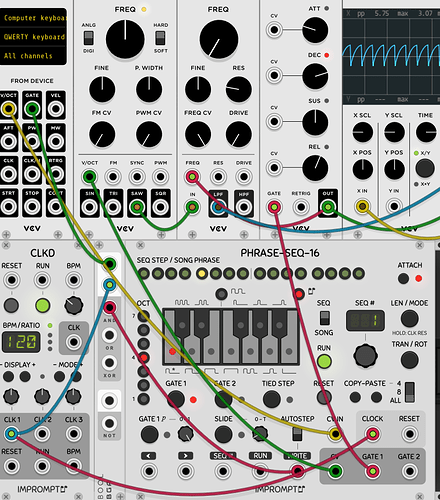 It could be possible to add an option to make the clock input serve as an enable on the write, thus avoiding the need for the 3HP bool module (or VCV VCA), but I’ll think about this more before making any changes to see what would be optimal qantization-wise. As things are in the current setup, hitting a key real quicly while the clock is low (and relasing the key before the next clock edge) will result in the given note being undetected by the PS16 (and thus not written).

Thanks for the suggestion. Ok so I tried the Trigger Buffer, and it works but with a different result.

With the VCA-based patch I can play a phrase legato, and it effectively ‘quantises it in time’. Which wasn’t the original motive but I like it now. With a fast clock and a long note envelope it’s a pleasing result.

With the trigger buffer, armed from the keyboard Retrig, I have to actively hit each note for it to write. I could imagine some logic to re-arm it from the clock for notes that are held down across clock ticks.

The VCA is being used effectively as an AND gate, and I was able to get the same behavior using this setup:

Yes, and I like the purer form of your patch in that sense.