My patches tend not to be gigantic, but the one performance issue I experience regularly is what I call audio hiccups where the audio through the monitors periodically stops for a fraction of a second. It’s quite jarring, but interestingly, if I have recorded a segment that included these hiccups, the audio dropouts are not recorded—the sound is continuous—but the effect of the dropout can be heard, e.g. the repeating pattern of a delay changes at that point.

Anyway, I am on on older i7 running the latest Windows 10, but I am using the CPU’s integrated HD4000 graphics. If I were to install a separate graphics card, would that possibly improve my situation? My options are a little limited because I would need a low-profile card to fit in the case. Also, I am not thrilled with spending more that $50-60 for a card for this older computer.

Would something as meager as this be worth the effort?
https://www.newegg.com/Product/Product.aspx?item=N82E16814127930

I’ve experienced the same behaviour on new 2018 mac book pro. Tried to increase latency and it seems that there are no more hiccups - but need more testing.

Yes, increasing the latency helps the dropout/hiccup problem, but makes it problematic to keep things lined up with the external devices I am syncing with.

graphics shouldn’t cause stuttering, they should just get slower frame rates. however it does sometimes seem to affect things. especially on macs, not sure about integrated graphics.

maybe try a dev build of v1 or the unofficial, unsupported experiments build from GitHub.com/rcomian/rack and drop the refresh rate. if that helps, it might be worth getting a better graphics card to help improve things.

On Passmark, a $50 card (i.e. GX-710) is marginally better performing than the HD4000 built into the i7, but just barely. It looks like you need to spend closer to $100 to get marked improvement. But if the lack of video power does not lead to dropouts, then … I’m not sure it’s worth bothering with.

Is it dangerous to run Rack.exe at a higher priority in Task Manager?

it’s fine to run at higher priority. there’s a module that does this, from impromptu I think.

I tried raising Rack.exe’s priority to High in Task Manager. It did not impact this problem at all. I am curious as to what exactly is causing the dropouts. CPU utilization for Rack stays below 20%. I am using a PreSounus iOne audio interface set to 24-bit 44.1K and the lowest latency setting. Using ASIO or WASAPI seems to make no difference,

I would be curious to know if the problems persist under JACK. I have no data on JACK ASIO Router (windows) or JACK vs. Core Audio (mac), but a computer piled in xruns under ALSA experienced zero stutters under JACK and the block sizes were identical.

graphics shouldn’t cause stuttering, they should just get slower frame rates. however it does sometimes seem to affect things. especially on macs, not sure about integrated graphics.

The GPU portions can/do steal compute, and Intel has made a few statements that they are not interested in optimizing OpenGL performance. When using the integrated on a newish i7, sysprof on linux (full system profiler) shows about 20% of CPU use across the system completely unaccounted for and another 10-15% are in visible parts of MESA (doing GL calls?)

Was this ever resolved? I’m having the same issue. I’m running Windows on a relatively high-end gaming machine. It’s more of a nuisance than anything.

Read the manual about optimization? Also 20% is pretty high if you have a multi core cpu but are only using one core for rack. Definitely read the manual. There are at least one million threads about this here and on Facebook. One counter intuitive thing is that it seems that graphics problems can actually cause hiccups. The theory is that it puts your cpu into thermal limiting, esp on a laptop. But cpuusage for audio is usually the culprit.have you turned on the cpu meters to see if you are running any piggy modules?

Must I read something? I’m tired. And my eyes hurt.

Actually, I haven’t experienced any dropouts for a while and completely forgot about the issue. I don’t understand, though, why Task Manager and Resource Monitor display such differing numbers. 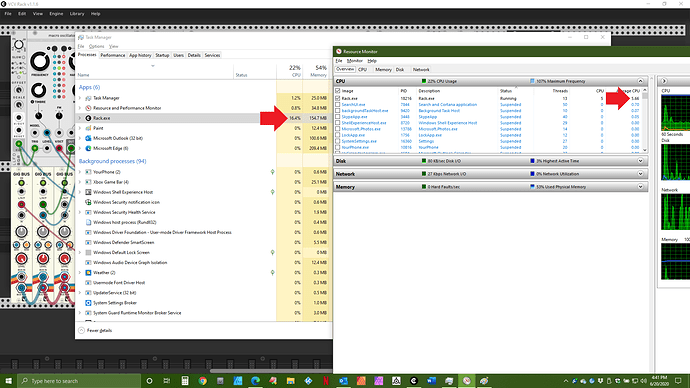 I think I’ve read it before, and I am pretty much doing all of that, so I suppose I adjusted my settings at some point in the past to the point where performance improved. One thing of note on Windows. At last on my machine. Regarding the “fullscreen” recommendation, fullscreen (F11) on my machine degrades performance and roughly doubles CPU usage. The fact that I am running an older and fairly unsupported machine may have something to so with this.

Bottom line: I am happy enough with how things are.

I am happy enough with how things are.

Btw sorry, i don’t have gold stars, but you can have a virtual Cookie